Von Pea And The Other Guys – To:You 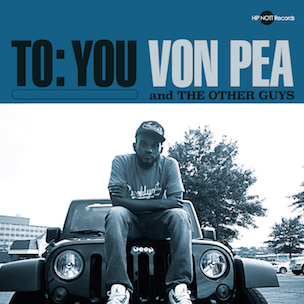 Veteran Brooklyn emcee/producer and one half of Tanya Morgan, Von Pea uses the “Introduction” on To:You to deliver a soliloquy slash dissertation-styled stanza on his own skills, interpretations, shortcomings and state of the game: “Everybody loves rap, everybody hates rappers, we the new porn stars, see/people wanna be us or f*ck us, but not around others, no respect for us, meanwhile adore what we do…” It’s a sobering yet applicable preamble to a praiseworthy body of work that finds Von, paired with production team The Other Guys, on a mission to make his place as a leading voice in underground Hip Hop as solid as ever.

Von Pea’s constant attitude throughout To:You is straight, no chaser: void of current day Hip Hop gimmicks to fall back on and containing a limited amount of guest spots that allow the main subject to be just as honest and potent as he feels fit. It’s just he, the mic and the beats. And that makes for a wholly consistent, but also far too brief, album experience. With the hard-earned veteran status he’s received, listeners can tell that Von knows he doesn’t have time to beat around the bush. Somehow, with To:You, he’s managed to leave fans gratified while most likely craving much more.

Each song on To:You tells its own story but still contributes to the skillful, focused whole. “Chasing Amy aka In Your Heart” is insightful, longing and self deprecating: a solemn, realistic take on being stuck in the “friend zone” with a woman you know you’ll never win over, despite your most gallant, honest efforts to gain her affections. With this one, Von has created a more mature, experienced version of Pharcyde’s classic “Passin Me By,” updated with a more modern storyline for the new millennium. While “Easy To Fall,” an adept example of the cautionary tale powers of an emcee like Von Pea, is poignant and shrewd as Von and guest Substantial play the roles of big brothers warning young lions against the snares and traps of the life that await them.

It’s clear Von’ Pea’s intention was to bring a soulful, jazzy, dusty vinyl feel to To:You. Coupling his talents with those of producers The Other Guys was a savvy way of making this happen. The beats care of the DMV duo are lush but gritty, wide-ranging but stripped-down. The Other Guys provide what can be considered the best possible compliment to Von’s gravely, soulful flow, especially on tracks like “Now You Know,” “Chasing Amy”, the analog-thick subdued salaciousness of “Connect Four”, and the swaggering, entertainingly dismissive “So East Coast”.

The powerful but laid back nature of “Now You Know,” led by the buzzing, prodding sound effects paired with a classic boom-bap drum patterns isn’t as much a change in direction as it is a reinterpretation of much of what is already being said and conveyed throughout much of To:You. Enclosed within the song is also one of the greatest lyrics on the album: “We go gorilla, barilla, tryna sound like a Dilla-made thrilla/and we ain’t quite there by a long shot, so we all got plenty time for a ball drop…”

The biggest issue that trips To:You up is its terseness. At only ten total tracks, there are a few too many interludes/instrumentals without Von Pea displaying his lyrical acumen. For that reason, the album isn’t quite what it could have been. It is, though, overall a piping hot helping of Hip Hop home cooking, but we’re unfortunately left scraping the plate at the end.