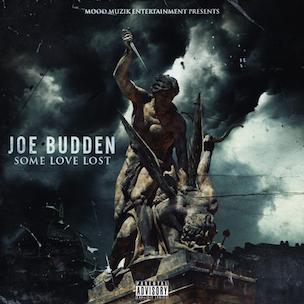 Joe Budden is troubled. He’s a lone shepherd wandering the forgotten lands in a genre of bling, women, booze, and sex. He’s knee deep in one, but reaching out for the other. He’s a curious case, then. And so his projects are often fractured, monastic turns at relaying this dichotomy. His battle, however righteous, hasn’t quite translated musically, though, except for a die-hard set of fans that identify with his wounds, hurts and unpleasantries. It was evident, even, in his “Shady CXVPHER,” while others took turns at relaying some sort of narrative and Joe Budden chose to go full diary. But he’s often at his best when he’s pouring his soul out on wax, and this EP’s case is no different.

As a series of bumps and bruises, Some Love Lost rattles along, as Joe is intent on only giving you his laments. His grandfather makes an appearance. As does his sordid tales of the rigors of relationships with women who are both gorgeous and, it seems, just as troubled. And, as Kanye has also mentioned, he’s not so good at these things: relationships, love, and women. Always beautiful, always deeply damaged, his relationships with these women are what dominate his music. But that’s not at all. There’s depression in there (as he ruefully drops a line about the late, great Robin Williams and their similar “ropes”) and a well-timed call from a pastor that has him dropping tears. He’s relentless on Some Love Lost. There are no let-up songs, no turn up, no happy thoughts, and no joy. It is a man walking along a road in the dark and it is not dawn yet and it will not be for some time. Each song segues into the next with almost no differentiation in terms of production. In fact, it could really be considered one long grim movement powered by his rage. “The Way You Love” speaks intimately about his carnival of beauties each with their own fatal flaw, which grinds against Joe’s. But, as he says on “Different Love,” there’s just something about bipolar sociopaths that these women find attractive. The deep azure bejeweled centerpiece is “Only Human,” which finds Joe autobiographically recounting the moments that led to a possible suicide attempt. It is a lyrical breakdown that folds in on itself, and in that way one of his best retellings in recent memory.

But rather than being the unstoppable force on Some Love Lost, Joe is the immovable object. It is a meditation, mostly. A collection of thoughts obsessively turned over and milled into substance. And that is both it’s strongest and weakest point. Almost everything that is done on Some Love Lost has been done before and differently, and better. There is Drake chipping off some of Joe’s emotionally vulnerable lane, albeit without the anger, and then you’ve got Joe himself. He is a master at describing and then relaying the situations and thoughts that lead to actions. On “Only Human” he effortlessly spits the slings and arrows of modern relationship life. Like, using Instagram to get your lover jealous, and that leading to a relationship of perpetual makeup sex. But his world is very narrow here, and he never describes the thoughts between the thoughts. Or, rather, never asks the questions that may lead him to escape the brutality of his emotions. And so he never approaches an emotional zenith the way Jay Z does on “Soon You’ll Understand” or “You Must Love Me.” Is he trapped? He never says so. And so we’re left to fill in the bubbles for ourselves. It’s frustrating to have him do this, but he simply tells the story and does not expound in any way such that you can’t help but wonder if that’s all Some Love Lost is meant to do.

As a meal before the main course, Some Love Lost, is a lonely one. But Joe’s change in style (to the autobiographical slaughter it is now) is interesting, and he claims he’s got his best work on deck. As for this one, it is an ambitious dumping of his tragedies on paper. But it also leaves Joe and this project rolling a rock up hill that never quite gets there.