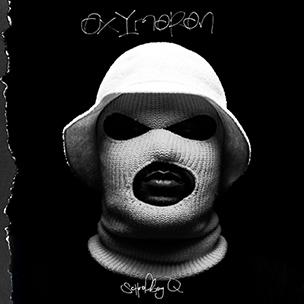 Somewhere between (or most likely before) the release of his own Habits & Contradictions album and Ab-Soul’s Control System, ScHoolboy Q embraced everything that accompanied releasing an album in conjunction with the major label system. On his fellow Top Dawg Entertainment member’s “SOPA,” Q rhymed, “Ever see an ex-student get a half a ticket / Think I’m lying, just ask Jimmy that check was mine as soon as we signed.” Expectations were raised, Interscope’s considerable marketing push was merged with the grassroots approach that netted Habits & Contradictions a #17 spot on Billboard magazine’s Independent Albums chart and singles were released.

The end result, finds Q employing a familiar mix of dark, introspective rhymes peppered with some youthful irreverence over top-notch production. Oxymoron is built upon the concept of duality. When Q spits, “How can they say feeling good is an addiction / But the world is full of shit so I don’t listen / In fact we livin’ to die is a contradiction,” on the title track, it’s not so much a rhetorical question as a manifesto for the album.

As a bar-for-bar emcee, ScHoolboy Q has a seemingly endless supply of rhyme cadences—each with their own syncopated rhythm. But whereas “Hands on the Wheel” was reckless fun that didn’t really need an explanation, misfires like “Collard Greens” have all the earmarks of a single but an execution that feels forced. A melodic hook and an intricate enough rhyme pattern power it, but the actual content isn’t particularly inventive, as Q raps, “Gimmie, gimmie, gimmie some / Freak the freckles off your face, frenchie freakin’ swappin’ tongues / Click my link and spread your buns / Lose your denim, make it numb / Blow it baby, no Saddam / Icky-icky-icky-icky…”

Similar moments are seemingly the result of production that isn’t bad per se, but ill fitting. “Los Awesome” finds Pharrell reverting back to 2003-era Neptunes, polyphonic ringtone style production. And while Jay Rock snarls through a fierce 16, Skateboard P doesn’t provide much of a pocket for Q to fall into. This becomes increasingly clear, when ScHoolboy ventures into the familiar territory of dark subject matter in which the album’s best tracks are cloaked. There are times when Q perfectly pinpoints the sources of systematic, black male rage (“Hoover Street”) while simultaneously articulating such rage (“The Purge”), focusing it inward or self-medicating to escape it (“Prescription/Oxymoron”).

In many ways, Oxymoron delivers exactly as advertised. It’s an ominous project that also needs a few radio reaches to provide ScHoolboy Q a platform to achieve mainstream success. You want a guy like Q to bring home a gold or platinum plaque, but will you endure the strategic placement of some Top 40 bait to see it happen?

In 2014 it’s not realistic to expect a major label album to be exclusively comprised of the dark material found on Oxymoron’s stellar moments; that would essentially give you Joe Budden’s Mood Muzik. But the handful of ill fitting songs presumably positioned as singles tarnish Q’s overall presentation, and they can feel like excess baggage. Listeners in search of lighter fare will likely gravitate toward “Studio” and “What They Want,” unintentionally reducing tracks like “Collard Greens,” “Los Awesome,” “Man of the Year” and “Hell of a Night” to filler. Ultimately the good moments are on par with what will be considered 2014’s high-water marks, and if held they weren’t held to the high standards of Setbacks and Habits & Contradictions, Q’s low points would be acceptable from another rapper. Given TDE’s ever-increasing appeal, Oxymoron isn’t quite an elite offering, but it meets the difficult task of attracting casual fans without straying too far from the formula that attracted ScHoolboy Q’s core audience.