Blu & Nottz - Gods In The Spirit 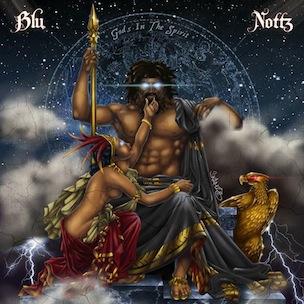 Much can be said—and much has been said—about the Los Angeles based rapper, Blu. He has done an exceptional job creating a career and persona that has both profited and suffered from its paradoxical qualities. Critics cheered his 2007 effort with producer Exile, Below The Heavens. However, since then, things have been a little…let’s just say complicated. Between haphazardly releasing music, having one of the most erratic live shows of any rapper and opting for a lo-fi aesthetic on projects such as Jesus and Her Favorite Colo(u)r, the enigmatic moments have always been balanced by promising music offering glimpses of a true experimental artist. Existing in a parallel universe, producer Nottz has also been on the fringes of commercial success while being acclaimed for his work with Busta Rhymes, J Dilla and Pusha T. After working with names on different sides of the Rap spectrum, he meets Blu at a more matured state in the rapper’s career on the six-song Gods In The Spirit EP.

Serving as a testament to this maturity is the first track, “Boys II Men.” The high-energy opener showcases a different shade of Blu. He rejects the introspective, complex, wordy style for a more melodic and consistent one, ending almost every line in the words, “son” or “kid.” Over the winding horns and pounding drums, Blu reminds the audience of his approaching veteran status. “You don’t know what you got ‘til it’s Janet Jacked, son / We go back, son / Like that, son / ‘88, you was based off crack, son / Me, I was putting bass on the track, son…” His deliver and cadences even sound fuller, as opposed to being hidden as it usually appears on his previous, unmastered work.

The song is an effective reflection of the rest of album. It is a new Blu, so to speak, and Gods In The Spirit, with it’s brevity and collaborative tracks, places him in a space that prevents him from digging too deep. Instead, his limited time is devoted to showcasing his lyrical ability—which both liberates and restricts him; again, another paradox to add to the list.

On the surface, above all the emotions, Blu is harsh, agile and savvy. He offers moments of scathing lyricism, such as “God Shit.” His first verse is on the offensive, addressing and perhaps embracing his position as an emcee with traditionalist values.

“Yo kid, you’re gonna be large / I had dream in Brooklyn, it was written in the stars / They chopped up Bebop and said it was ours / I’m too original, the vinyl should’ve never went digital,” he rhymes. The intensity of the verse increases, as he directs his attention to those with hands too short to box. He follows saying, “The mirror in front of you shows eyes that never wanted you.”

However, he is restricted because among the guest features and newfound braggadocio, Blu doesn’t fully develop this new identity. Returning back to “God Shit” as an example—Blu is essentially relegated to a featured guest on his own EP. And though Blu’s verse is skillful as well as the other guest emcee’s bars, the listener is kept from finding any real connection due to the overcrowding in the booth. This is unfortunate, especially at a critical moment when Blu’s lyricism is at its peak. Overall, collaborations are hit and miss. “Cream Of The Crop” is forgettable, while “Crooks In Castles” runs long and lacks continuity.

Gods In The Spirit is a run-through. It can be consumed in less than half the time of your gym visit. An album of this length should be able to create a narrative immediately. However, Nottz and Blu fail in establishing any substantial overarching themes, presenting a feeling of conflict and truly challenging the listener. Instead, it plays simply like an assortment of songs compiled over the course of a day. While it’s enjoyable to varying degrees, Gods In The Spirit is a misleading name for a project with little ambitions beyond being a good listen.