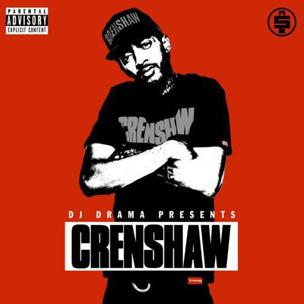 Prior to its release, there was much ado made about Nipsey Hussle’s plans to charge $100 apiece for his “Crenshaw” mixtape. The talk came whether or not people understood that a ticket to an upcoming “Proud 2 Pay” concert came along with the physical copy of the mixtape, and many of those who knew the project would be available as a free digital download couldn’t understand the seemingly exorbitant price tag. As such, some wrote the project off. Lost in a lot of the talking was the fact that Nipsey Hussle has built a loyal fan base through his consistency. On “Outro” from his “The Marathon Cotinues” mixtape, Nipsey rapped, “They tellin’ me they believe, and I got style for days / And when I do drop an album, they’ll be proud to pay.” When “Crenshaw” dropped, fans spoke with their wallets, and what they gave was an overwhelmingly positive response. “Crenshaw” continues Nipsey’s streak of dropping quality projects.

Nipsey Hussle’s music pays homage to the “Gangster Rap” of the ‘90s, where in very plain view of listeners—amongst the shootouts and drugs mainstream media focused on—were honest perspectives of the circumstances faced in inner cities across America. On “Change Nothing,” Nip raps, “Now this is the reality we wrestle with / Where every nigga down to die for what he represent / Where every murder is a mission rooted in revenge / You make it out alive in one piece, you set precedent…” While not part of his “Marathon” mixtapes, you can hear the ideologies of that series when Nipsey raps, “I swore to the world if I made it out / The truth about these LA streets and all what they about / The paranoid emotions, will they stake us out / When we pull up thick in some foreign shit at the geisha house / The loses that we took when they raid the house / The vision that I seen when I laid it out / The only important thing is the paper route / The motto I embody, the prophecy when I played it out…”

Nipsey has never been overly reliant on multi-syllabic words or punchlines for the sake of proving lyrical ability. His plain language allows him to paint pictures and/or relay messages that relate to the average person, and his avoidance of punchlines helps him to avoid the clichés used by emcees insistent on trying to prove their wittiness. “Face The World” is a great example of such, and a good song overall. Over a 9th Wonder production, featuring a sped-up sample of Rhinoceros’ “That Time Of The Year,” Hussle closes out the track with the following:

If Officer Coffey’s conversation with Trey from Boyz N The Hood didn’t set the tone on the intro, Nipsey and his collaborators are sure to. “Crenshaw” is very much a Los Angeles event, and many of the city’s brightest young stars show up to assist. Dom Kennedy appears on “Checc Me Out” and “H-Town,” both of which also featuring Slauson Boy affiliate Cobby Supreme, with Teeflii and Skeme assisting on the latter as well. While Nipsey, Skeme, Teefli, Cobby, and Dom create an anthem sure to play in the streets of LA, two actual Houston representatives appear later on “Go Long.” “H-Town” might demand replay, but “Go Long” lacks the impact. Elsewhere, “Summertime In That Cutlass,” produced by up and coming Los Angeles production crew, The Futuristics, probably provides the sound most identifiably Californian on “Crenshaw.” Over the laid back production, led by drums and wobbly bass, Nipsey reminisces over hustling, standing his ground, and murder. The fact that the combination feels right, and comes off effortless speaks to Nipsey’s diversity. Whether pushing listeners to chase dreams over 9th Wonder’s boom bap production or telling stories of the streets of South Central over an undeniably West Coast sound, Nipsey Hussle’s appears to be just as at home as he would be on the street the mixtape is named after.

Nipsey is equally comfortable speaking to the fairer sex when the tempo slows on “4 In The Morning” and “If U Were Mine.” The clarity of expression that Nipsey consistently displays allows listeners to feel like they relate to him, and there’s no disconnect with his image. This creates a palpable feeling of authenticity—something often claimed by artists, but rarely felt by listeners—in a genre that demands artists “keep it real.”

The “Bullets Ain’t Got No Name” series was music straight off Slauson Avenue; it was Hip Hop from a South Central state of mind. With his “Marathon” series, Nipsey offered himself as a Slauson boy, matured, and free of label politics. “Crenshaw” is where the two sets of projects meet up. While he may have never strayed far from the streets of Los Angeles, “Crenshaw” is like a homecoming for the artist that dropped the last two “Marathon” mixtapes, bringing the growth and maturity shown on the “Marathon” series back to a project that bares a close resemblance to the “Bullets Ain’t Got No Name” tapes. While not without its flaws, at its high points (of which there are many) “Crenshaw” is on par, or above what a lot of artists have put on shelves as of late. This should serve as a wake-up call to Hussle’s competition, considering these are supposed to be the songs that couldn’t make Nipsey’s next project “The Marathon 3: Victory Lap.”