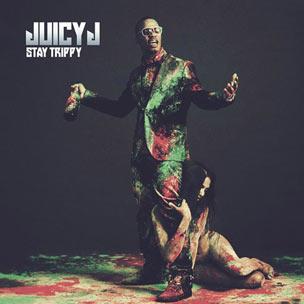 Rap is a young man’s game, and if you’re a veteran, your relevancy may very well be in question. Not for Juicy J. With over 20 years in the game, the Three 6 Mafia member is still making hits. Last year, he released “Bandz A Make Her Dance,” which peaked at the #29 spot on Billboard magazine’s “Hot 100” chart in the midst of a 20-week run before being certified platinum by the RIAA on August 1, 2013. The strip club anthem is still receiving applause in more ways than one. With the bar set, can the Memphis, Tennessee rapper maintain the momentum with his third solo album Stay Trippy?

A few things are undeniable though.

The production is tight—ranging from creeping drive-by music to aggressive versions of the “X Files” theme song. Producers like Young Chop and Mike WiLL Made It provide Trap soundscapes that complement Juicy J’s enunciate-every-syllable flow. He also incorporates well known samples such as Freda Payne’s “I Get High Off Your Memory” (most will recognize from Styles P’s “Good Times”) on “Wax” and the more recent  “High For This,” using both to promote THC and making the sound his own.

There’s a lot of lazy lyricism on this album. Rhymes like, “I get head like lice,” on “Go Out” or “I smoke more weed than a hippy” on “If It Ain’t” are unforgivable. There’s even a “smoke until I look Chinese” line used twice on this project, once by Juicy J and again label head Wiz Khalifa. By and large, this is a collection of party records, so nobody is expecting Kendrick Lamar “Control” bars. But when you write quotables like Juicy J’s notorious line about his inability to refuse “ratchet pussy” from “Bandz A Make Her Dance,” you have to keep up…with yourself. And that goes for choruses too. There’s merit in the simplicity of many of the hooks on the album when its function as club music is considered, but none of them ever reach the catchiness of the aforementioned lead single.

The majority of the guests seem to have been strategically placed as most are charting. Some work better than others. Obviously there’s chemistry between family, old (Project Pat) and new (Wiz Khalifa), but Juicy J seems to work well with whoever. Perhaps this can be attributed to Juicy J’s habit of mixing rhymes about his vices with affairs from the street in almost every verse. It makes him something like a permanent guest feature, even on his own songs. And that can end up sounding generic.

Some Rap is tailor made for headphone listening and careful analysis of every word. Then there are songs that are meant to be played loud in public settings, and the lyrics don’t matter so much. If you haven’t already figured it out, Stay Trippy is the latter. And for as much flack as it receives, there is entertainment value there and it serves its purpose as a soundtrack to the “trippy” lifestyle. Still, existing within that world that overlooks lyrical competence or any moral deficiencies, there are enough instances where the veteran’s effortless style starts veering too close to effort-less. But it doesn’t seem like the veteran will be going away anytime soon.