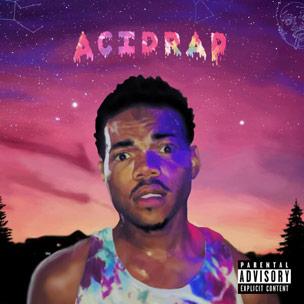 It was just a little over a year ago when burgeoning Chicago-native Chance the Rapper released his debut mixtape #10Day. Drawing motivation after receiving a two-week suspension for smoking weed during his senior year of high school, the project showcased a postulating perspective from a young man with an intriguing rationale. Fine-tuning this design through a rhythmic kaleidoscope, Acid Rap veers off into a vivid world inspired by drugs, and it’s an audible odyssey that gets better with each trip.

Chance has an undeniably unique delivery, and it’s one that takes getting used to upon an initial listen. However, it’s evident his animated flow is also the kinetic backbone for his lyrical disposition. Whether he’s blunt cruising alongside Ab-Soul on “Smoke Again” or drifting through a cloud of haze on “Juice,” Chance charmingly occupies each record with pristine execution. Over a laid back cut that shouts, “Burn while listening,” the Action Bronson-assisted “NaNa” elicits a host of quotables: “Lickety-split, lickety-slipped on a shell / From peelin’ banana split backs / Give me my Kit-Kat / Don’t break me off shit, batch, fack is you mean bitch?”

This isn’t to say he’s ill equipped to tackle more serious matters. In fact, much like #10Day, some of his best work comes in times of reflection. “Acid Rain” is a deep narrative that touches on the death of a close friend (“My big homie died young; just turned older than him”) as well as his current state of existence. Lighter in tone, “Chain Smoker” blissfully comes off as his own personal anthem while “Everything’s Good (Good Ass Intro)” details a career that looks more promising with each passing day despite his imperfections. Putting his journey thus far into perspective, he attests, “But I knew I was fly when I was just a caterpillar / That I’d make it even if I never make a milla / When I meet my maker he gon’ make sure that we chillin’.’”

This balance of lyrical gusto and thoughtfulness is brilliantly captured on “Pusha Man.” Initially presented as an exuberant record laced with visceral ad-libs, he brashly raps, “You a lame, and your bitch break down my weed sometimes / See my face in the streets, in the tweets and a Reader or a Redeye if you read Sun-Times / She got blisters on her knees, she’s a fiend for the D / Even though I only beat one time.” The once-upbeat backdrop soon turns gloomy as Chance delves into the continuing violence that plagues his hometown. Articulating the stigma within his community as well as the country at large, he makes it painfully clear that the issue is far from being repaired.

“They be shooting whether it’s dark or not, I mean the days is pretty dark a lot / Down here it’s easier to find a gun than it is to find a fucking parking spot / No love for the opposition, specifically a cop position / ‘Cause they’ve never been in our position,” he rhymes.

With Acid Rap, Chance The Rapper does more than simply entertain with poetic quips and a vibrant personality; he sparks a conversation that keeps the listener committed from start to finish. It’s this steadfast conviction that separates him from the current pack of talented yet indistinct peers, and at 20 years old, the Windy City representer should have little trouble building upon what looks to be a breakthrough moment with his latest project. As if he already knows the answer, Chance facetiously ponders, “I hope you love all of my shit.” So far, so good.

Listen to Acid Rap by Chance the Rapper.