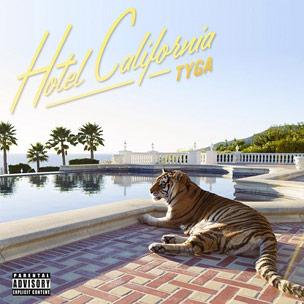 It’s only appropriate that his latest album opens with the Lil Wayne-assisted “500 Degrees.” Over pervasive synth and mind-numbing drums, Tyga shells out tasteless rhymes (“Got bars, front gate, face shot, blind date”) with ease. Not to be outdone, Young Money’s head honcho turns in his own lewd prose (“But let me pass the weed, and stop passing judgment / Before I have to beat him like a dick, he had it comin”). This stigma carries over to tracks like “Hijack” and “Get Loose,” reiterating Tyga’s sexually obsessed libido.

Whereas records like “Rack City” and “Faded” were paired on Careless World with considerably compelling cuts (“Black Crowns,” “Let It Show”), Tyga instead opts to drive home a bombastic approach that becomes more burdensome than entertaining. “Dope” contemptuously flips Dr. Dre’s 1992 classic “Deep Cover,” and save for a menacing beat, Tyga sounds severely out of place alongside the corner boy bravado of Jadakiss on “Hit Em Up.” Without subtleness, the Compton rapper trounces around the subject of pill popping on “Molly” like he was making commission on sales for the designer drug. Suffice it to say, it’s an exploitive performance that warrants an Arnold Jackson side eye.

Not until the latter half of Hotel California does the album begin to gain momentum. “Palm Trees” and “M.O.E.” are feel-good tracks that offer a change of pace to the usual debauchery, while “Diss Song” digs deep into a friendship that went south. Calling out his former partner, Tyga raps, “Looking at my story, breaking down my glory / Judging my highlights, winning shots like Horry / Always trying to take from me, criticize, hate on me / Want to call me fake ‘cause you really can’t relate to me.” With its layered production bolstered by fiery guitar licks, “Drive Fast, Live Young” is easily the album standout. Tyga isn’t necessarily saying anything profound here, but his polished delivery matched with JMSN’s crooning makes this record flawless.

In similar fashion to Weezy’s I Am Not a Human Being II, the production, features and overall material on Hotel California displays a regressive sense of originality from Tyga. His sexual callousness wears off quickly, and what listeners are left with is a release better fit for a Ramada Inn than a Four Seasons. Hopefully the reservation is refundable.