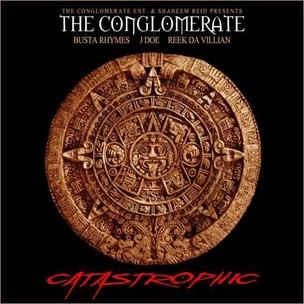 Busta Rhymes joined Lil Wayne and Baby’s Cash Money Millionaires team earlier last year, but he’s still a boss at heart. With nine solo albums and nearly two decades in the industry under his belt, it only makes sense that the Brooklyn vet would continue his aspirations of leading a crew instead of simply being a member of one. After putting on former members like Roc Marciano and Rah Digga with his group Flipmode Squad, he is using Catastrophic to showcase the rebranded crew of Conglomerate Records.

Over the past decade and some change, acts like 50 Cent and Lil Wayne set a new standard for mixtapes: rapping over commercial instrumentals comes with the burden of finding a way to make those songs your own, virtually outshining the originals. Unfortunately, Catastrophic comes up short when employing the beats that burned radio this year. Busta, Reek Da Villain, and J Doe are all competent rhymers, but their bars to songs like Trinidad Jame$’s “All Gold Everything” and Wayne’s “No Worries” fail to stand out from the rest of the Rap landscape; frankly, they sound like any run of the mill emcees rhyming over beats they downloaded from their favorite message board. There are a couple of standouts: Busta brings in Q-Tip to trade bars for an ode to Janet Jackson on their take of Kendrick Lamar’s album cut “Poetic Justice,” and the Conglomerate crew uses nifty flows to pick apart Timbaland’s instrumental for the Missy Elliott song “What’cha Gon’ Do.” But bars over the aforementioned Kendrick’s “Backseat Freestyle,” Big Sean’s “Mula” and A$AP’s “Fuckin’ Problems” fall flat.

Outside of the remakes, Catastrophic continues to disappoint. Reek and J Doe – while skilled in their own rights – fail to stand out from their competition. Reek sounds like a slightly above average mixtape rapper, and J Doe’s dabbling in Auto-Tune feels contrived. Their contrasting tales with women hit true with “Diamond On The Ruff,” but elsewhere, neither of them have the distinctive voice and charisma of Busta Rhymes, who still sounds alive on songs like “Freak Show” and “Catastrophe.” By the time “Hail Mary” comes around, listeners may be grateful to actually hear something that resembles a real song, with a Trey Songz chorus and guest shots by Young Jeezy and Lil Wayne.

Busta Rhymes still has an ear for lyricists – the same way that he did during Flipmode’s heyday – and it somewhat shows on Catastrophic. But Reek Da Villain and J Doe will need some extra lessons from their leader of they’d like to make a stamp in Rap’s competitive marketplace.

Listen to Catastrophic by Busta Rhymes and The Conglomerate