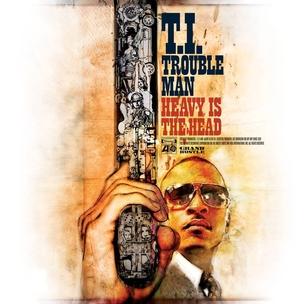 During T.I.’s reign during the first decade of the aughts, Pharrell’s proclamation of him as “The Jay-Z of the South” rang true. With one of the best singles discographies of his Rap contemporaries and LPs that filled in the blanks, Tip was developing an argument for being the best emcee to ever emerge from his region. But a pair of prison bids threw a wrench into his momentum: No Mercy felt like a rushed commissary deposit, and a pair of mixtapes dissipated as quickly as they hit DatPiff servers. Fortunately, Trouble Man: Heavy Is The Head sees T.I. reclaiming his spot as a force to be reckoned with.

From the first bar of album opener “No Introduction,” Trouble Man showcases an unapologetic T.I. “I’m just a hood nigga, I ain’t ever had shit. Just a bad attitude, and a bad bitch. Just bag full of tools, and a half brick,” he spews. Such lyrics probably cause a headache for his parole officer, but they’re a relief for fans who were turned off by the faux remorse from his recent retail efforts. With his vitriolic, multisyllabic snarl still intact and soundbeds from longtime collaborator DJ Toomp backing him, he sounds just as comfortable spitting the Trap Rap that earned him his reputation on records like I’m Serious and Trap Muzik.

Trouble Man’s title references the hook on Muzik’s fan favorite “Rubberband Man,” and he convincingly returns to those hungry bars on highlights here. The defiance continues with “G Season,” “Trap Back Jumpin,’” and “Wildside,” as the veteran nimbly keeping up with youngsters like former protégé Meek Mill and A$AP Rocky. Tip wisely chooses to address (and ignore) the past few years’ negative headlines through skits or individual lyrics instead of forced songs.

When he isn’t talking about his previous transgressions, T.I. uses Trouble Man to resume the tradition he’s built in years past: making strong, full-bodied records, allowing the new producers du jour to earn additional notches under their belts. T-Minus successfully duplicates Tip’s hard-nosed, block-posted sound with “Addresses” and gets more inventive with the more poppy “Guns and Roses,” which sees him and P!nk tackling a dwindling relationship. Hit-Boy continues his winning streak of bangers with “The Way We Ride,” a trunk-knocking dedication to whips in the South. On “Wonderful Life,” T.I. rhymes as slain bodyguard Philant Johnson and his father before using a final verse to address their impacts on his life.

The low points of Trouble Man surface when he takes hit-making formulaic approaches to songs that he would have uniquely bodied during his peak points. The club-ready, Lil Wayne-assisted “Ball” fails to stand out like his previous bangers, and “Cruisin” embarrassingly showcases a sing-songy flow that isn’t Tip’s forte. Still, this is a strong return to form for the self-proclaimed King of the South. Heavy Is The Head that wears the crown, but T.I. seems to be up to the challenge.