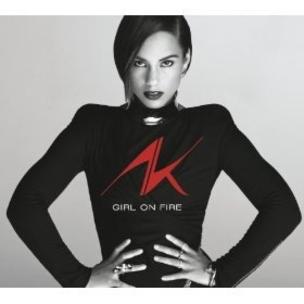 Alicia Keys has released her fifth album Girl On Fire a little over a decade since she first came into recorded music prominence. The Hell’s Kitchen R&B Singer-Songwriter went cross-genre in 2001 thanks in due part to her ability to add musicality to R&B. It wasn’t anything new to the genre, but at the time it was something that wasn’t common. It was a well marketed intention of artistic integrity that earned Alicia Keys a record setting five Grammys in one night in 2002, and she’s delivered on the promise of being that year’s Best New Artist ever since.

With Girl On Fire, she continues along a “Best New Artist” vein. For the first time, Alicia heavily enlists the help of some of today’s popular songwriters (for every track except two): Emeli Sandé, Bruno Mars, John Legend, Babyface, and Frank Ocean. None of the collaborations backfire in the way they could. Alicia retains her signature style. Apart from the noticeable inclusions on the album, the noticeable absence from the Girl On Fire crew is Kerry Brothers. The acoustic production of every track except “Girl On Fire” and “A New Day” (respectively produced by Salaam Remi and Swizz Beatz) mark Kerry’s obvious exclusion.

Alicia’s songwriting turned inward since 2007’s As I Am. Songs about romance were paired with songs about realizing one’s purpose and the lessons of life mistakes. Girl On Fire finds the perfect balance of self-help and realized-romance. Take for instance the beautiful “Brand New Me” where she sings, “If I talk a little louder/If I speak up when you’re wrong/If I walk a little taller/I been under you too long” along with the Frank Ocean co-penned “One Thing” where the pair’s words come together in harmony. The Maxwell duet “Fire We Make” has the potential to be Alicia’s biggest single since the 2009 Drake pairing “Fireworks” – romantic, succinct, with an indelible R&B melody. The album’s signature Alicia Keys moment, “Not Even The King,” is the most stripped down track that captures Alicia’s ability to carry simple production (think of how it felt listening to “If I Ain’t Got You” for the first time).

Upon first glance there’s an absence of radio singles on Girl On Fire, but aside from the strained vocals on the title track, A.Keys has delivered a subdued album. While Keys started by taking over the Pop charts, she’s slowly worked her way into an R&B focus – it’s a welcome endeavor as she’s always been a true R&B artist. Girl On Fire pushes her superb writing skills forward without losing what makes Alicia Keys the artist she promised to be 11 years ago.