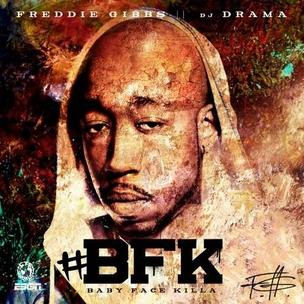 One of today’s largely recognizable Rap vocalists with a scruffy delivery catered to please the streets is Freddie Gibbs, equally a counterpart and an anomaly amongst Hip Hop’s prevailing scene. His uncompromising aggression makes for a tough as nails presence that has risked increasing irrelevance within the mainstream, thus he has maintained professional independence despite close ties to major label entities. Fresh on the heels of a recent collaborative EP with Stones Throw impresario Madlib, Baby Face Killa is the latest full length release from the always anticipated Gangsta Gibbs.

Aided by an all star cast of newer and well established emcees, Baby Face Killa gives Freddie Gibbs a platform for a potentially wider reach than he has achieved to date. Having suffered a series of standard industry tribulations prior to breaking through, those obstacles strengthened his determination towards gaining respect, a facet put to good use with this project. Between the effortless rapid-fire Midwest flow on the intro “BFK” and “Still Livin'” which takes a page from the trap style of his benefactor Young Jeezy (who makes appearances on the lewd “Go For It” and “Seventeen,” a retrospective look at their humble beginnings), Freddie’s evident grasp on authenticity surfaces with very few signs of disappearance.

Putting up absolutely no false pretense regarding his passion for debauchery, aptly titled songs including “Money, Clothes, Hoes” and smoker’s anthem “Kush Cloud” (featuring veteran Krayzie Bone and freshman SpaceGostPurrp) allow Freddie Gibbs creative space within the confines of his comfort zone. In the same vein, his cohesion with Dom Kennedy shines on “Walk In Wit The M.O.” (their second record together this year) and the soulful “Krazy” guest starring Jadakiss & TDE’s Jay Rock continues the chemistry developed with Statik Selektah who fully produced last year’s Lord Giveth, Lord Taketh Away EP for Gibbs. These versatile highlights do much to complement his rugged character which has no trouble making a statement of its own.

Freddie Gibbs is steadily mastering the art of mindless entertainment, promoting a hardened sound that is fearless and free of a filter. Baby Face Killa mostly consists of organic groupings and catchy hooks, both outweighing minimal flaws and missteps such as repetitive material and Kirko Bangz applying the no longer novel autotune to “Bout It Bout It.” In all, Gibbs and his edgy demeanor are necessary to further the worthy cause of gangsta music and pave a lane for an alternative harsh reality the masses are ill equipped to handle.