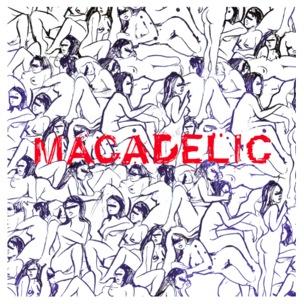 Mac Miller seems to be looking beyond the present moment. In his young career, he has released several projects, each strengthening his fan base. Macadelic is his latest offering, a mixtape said to be a view into Mac’s world. As it turns out, it’s also a view into the progress of a young artist trying to maneuver through the nightmares and blessings of a dream. It is not only an example of what his life is like in the present moment; it’s also an example of what he can offer in the future.

It would also seem Miller feels he has a point to prove. People have criticized his work in the past, something Mac’s heard loud and clear. He mentions “[a] hundred thousand haters writing ‘bout my jams” on “Desperado” and complains about it again on “America” (“I heard some corny words said about my music”). He mentions this yet again on “Thoughts from a Balcony,” citing “writers taking shots without a Nikon.” Criticism may have given way to hunger however, as Miller delivers his most versatile project to date.

Those in search of lyrical content can find some fill in the aforementioned “Thoughts from a Balcony,” where the Pittsburgh emcee pens about a personal pursuit for meaning through the glamour of newfound stardom. He also shows clever wordplay on “Aliens Fighting Robots” (“A hundred wars are going on currently /Soldiers sent to death on some Jets for the Curren$y”). Miller’s flow is as fluid as ever (as shown on “Sunlight” and “America”) as he rides an array of beats with different tempos, countering some of the criticism he faced in the past. He glides from the up-tempo Cardo-produced “Ignorant” (with Cam’ron) to the mellow sounds of “Clarity” and “Angels (When She Shuts Her Eyes)” with ease. He continues this over “The Mourning After,” “The Question” (featuring Lil Wayne) and “Fight the Feeling,” (featuring Iman Omari and Kendrick Lamar). All of this adds to show that he can hold his own on the microphone, though it’s not always flawless.

Macadelic takes dives in places. “Vitamins” sounds lethargic and feels as though it could’ve been shelved. As noted above, the rhymes can be strong at times but they aren’t always top notch. For instance, the mixtape’s first line is, “I’ve got a pocket full of posies.” Also, while his flow stands out on the aforementioned “Ignorant,” his content on the Cam’Ron assisted cut is questionable (“I’m Robert Downey Jr. You more like Steve Carell”). Later, he does more of this on the trippy Lex Luger-produced “Lucky Ass Bitch,” which features Juicy J. These missteps take away from the mixtape but don’t completely overshadow the positive notes.

In the end, this mixtape is more than just a look into Miller’s mind. Macadelic also provides a glimpse into his potential, displaying more of what Mac’s capable of. With sights set beyond his present stardom, Miller continues to show openness to new styles, a hunger for respect and improved delivery. Macadelic is a great sign of the path he’s making for himself and it’ll be compelling to see where that path leads him.