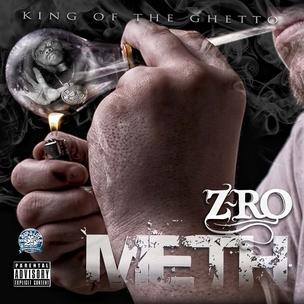 Continuing his drug-themed series of albums, Screwed Up Click member Z-Ro presents his latest LP, Meth. As if Crack, Cocaine, and Heroin weren’t enough, Meth is a fourteen-track offering of laid-back Southern raps and thugged out crooning, with the trademark Houston sound that only a few sips of purple-hued Sprite and Southern hospitality can create.

Important to note is that Meth is equal parts rapping and singing, and Z-Ro does both pretty impressively. From time to time when his flow tries to get too speedy, some awkwardness arises, and he’s not exactly John Legend with the vocals, but it’s his Texan panache that gives Z-Ro’s style an edge. Not everyone can sing about having sex with a woman one last time before she marries another man alongside rapper Willie D who drops bars such as “your groom ain’t freaky like me down there, I’m well rounded with the lick game, dude’s is square, by this time tomorrow you’ll be walking the aisle, but I’ma be the reason you smile” as heard on “One Mo Time.”

In fact, the songs focusing on the opposite sex in general hold the most entertainment value on Meth. The first few seconds of “Pig Feet”

will have heads nodding with its smoothed out instrumental, and by the time the hook is over, laughter will ensue. The title makes sense thanks to the hook, as he sings, “girl I can see the pig feet hanging out your pants, I’m only gon’ give you one more chance to give that thing to me.” As he threatens to “break [her] kidneys,” Z-Ro asks his woman of choice “so what you drinkin’, what you smoking’ shorty? Loosen up and prepare yourself for this poking, shorty.”

Other standouts include “No Reason,” a more club-appropriate, aggressive track, featuring Z-Ro not giving a fuck as he claims, “fuck the world for no reason, bitch, nothing righteous bout none of y’all niggas, none of y’all niggas don’t know Jesus, bitch.” “Never Had Love” is a proclamation of money’s superiority over love in Ro’s life, and he even borrows the melody from the chorus on “Mo Money Mo Problems” as he claims “Y’all already know what they want from me, simply to see me B-R-O-K-E and D-E-A-D.” Slower points include “Southern Girl,”

featuring Yo Gotti, with average flows and a subject matter touched upon countless times in the past.

Especially with features from people like Bun B (“Ro and Bun”

) and Slim Thug, Meth is another album that will contribute to the legacy of that quintessentially Houston-area sound. Its off-kilter “love” songs will prove to be perfect crusing music for non-monogamous men, and within its fourteen tracks are quite a few bars worth quoting.