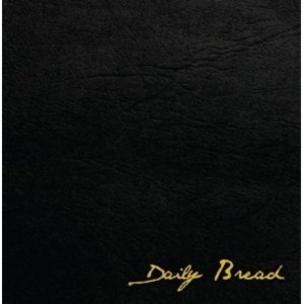 Last year Apollo Brown made the soulful soundscape for Journalist 103’s hostile Hip Hop takeover in The Left’s Gas Mask. While the verbal aggression found on that platter were more inspired by Screwball or Jedi Mind Tricks, Apollo returns a year later with another project, teaming with Low Budget Crew’s Hasaan Mackey for Daily Bread. Together, the Michigan producer and upstate New York emcee make an ideal album of personal journal songwriting complemented by slashed up ’60s Soul beats that make it top-notch audio sustenance.

Although he may be a new voice to many, Hasaan shows his emcees qualifications quickly. “Elephant”

is phenomenal recession rap, where the writer alludes to the ominous signs of tough times in nearly everything, without being melodramatic or over-depressing. This approach calls back to early Nas and Wu-Tang Clan for its ability to resonate with city living, and the ills of the world tangible to every sidewalk journey. “Tell Me” is another great place for Hasaan, who aids Apollo Brown’s production, in accenting a popular sample flip with some interpolated Prince vocals. Although the subject matter is heavy throughout much of Daily Bread, it’s not an overbearing listen. Mackey does an excellent job of making Apollo’s loops three-dimensional, and finding constant ways to connect with his user. In all the urban decay, there is plenty of hope, and tracks like “Higher” pick up the listener just as quickly as others check their reality.

Apollo doesn’t switch up his tools too much for this project. It appears that the sample sources are much the same, however lighter-sounding records with more movement and slices are they key difference of Daily Bread versus Gas Mask. One of Apollo’s trademarks is providing a lengthier listen at the beginning of the record, tipping his hand at just where the sounds might be coming from, and then – dissection. One can hear the hunger and pride throughout Daily Bread, and the Blaxploitation interludes not only nod to Ghostface Killah classics, but help this project shine as an album. Neither artist is heavy-handed in giving you each song’s theme and message, so the interludes help navigate the overall message. Fans of early RZA will definitely appreciate Apollo’s soulful courage.

Apollo Brown is in the same place that 9th Wonder, Kno and RJD2 were a decade ago – an incredibly dope underground group producer deserving mainstream recognition. Moreover, at a time when more-exposed new artists are invading the blogosphere, Apollo is working with lower-profile emcees like Journalist and Hasaan and making full, resonant albums that make them all the more interesting. Veterans like O.C., Kam and Tragedy Khadafi built careers off of similar introductory albums. If Mackey can grab your attention enough to listen, his opinions and imagery most certainly have what it takes to keep it, in one of the better producer-emcee albums of 2011.