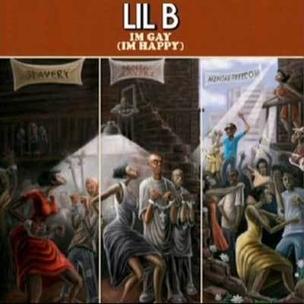 Editor’s Note: As this is neither an album nor a mixtape, DX decided to go with no rating on this one.

If VH1 ever makes an I Love 2011, they’ll damn sure be talking about Lil B. The longtime front-man for The Pack is not new to the Hip Hop scene, but through being the face and voice of the #Based movement, he’s joined Odd Future, Kendrick Lamar and Mac Miller as another crowned star who needed no storied label to become it. Lil B has released five “official” solo albums in two years, but it’s hard to call them that – when they aren’t nationally distributed and usually have free versions easier to find than legit download. I’m Gay stood the chance of swinging a hammer at a Berlin Wall within Rap, and then the Based God threw (I’m Happy) on there to waffle, missing any pride parade bookings. Announced with a flood and released with a trickle I’m Gay (I’m Happy) is a definitive (yet free?) body of work that has some powerful moments, and is a devil’s advocate counterpoint to so many of Rap’s conventions.

There are two really great things about Lil B: his sincerely positive intentions, and his ear for production. As alluded to around the album’s title controversy, the 21 year-old wants to uplift his many (Twitter) followers. “Unchain Me” is a cry from a  mountain of joy, and a break from fame, where Based God says that he’s turned off his phones from the evil, and brought himself closer to spirituality. “They told me that I’d never make it rappin’,” he says at one point, speaking directly to the criticism commonly received for B’s offbeat flow and stream-of-consciousness content. True, Lil B is perhaps a verbal tagger more than a formally trained graffiti artist, but underneath Clams Casino reworking a Lost Boys soundtrack gem, it all seems triumphant. The same can be said of “Gone Be Okay,” where Based God rhymes over a barely altered film score to encourage love, friendliness and hope amidst these troubled times. The craft of rapping is poor, but the presentation is so sincere and so authentic that it’s taken differently than it might appear on another album. Lil B’s I’m Gay is not unlike a novice rapper presenting his demo to the world, and awaiting constructive criticism with an earnest smile. It just so happens that the production and sequencing of this project are infinitely better than a typical demo submission from the pile.

Goodhearted intentions can only get one so far. Clumsy rhymes (and non-rhymes) like “I’m nicer than grandma with a cup of iced tea” on “Trapped In Prison” are quick reminders that Lil B’s craft could give Waka Flocka Flame the gas-face. However, unlike Brick Squad’s aforementioned rapper, Lil B touches on social epidemics. “I Hate Myself,” although it’s spoken akin to a contemporary R. Kelly ballad, deals with the effects of negative images of Black people portrayed in the media. Still, it might be the deft reworking of a Goo Goo Dolls multi-platinum single that gives this work its greatest talking-point. “Open Thunder Eternal Slumber” sounds like a 50 Tyson freestyle more than an album-worthy Based God track. With some really powerful moments, I’m Gay frequently veers back into the pocket of interesting Internet production with one-take proclamations overtop.

As with any sub-movement in Hip Hop, there are core Based God fans. With the musical influences, the sincerity, the spectacle of it all, there is so much to love in a culture that’s frequently grown predictable and monotonous with trends. Lil B appears to have given his growing fan-base a high-mark, and proven that together the ants can indeed intimidate the elephant. To that elephant – the mainstream, who is still figuring out what to make of the Dudley Do-Right rapper who still has “hoes on his dick ’cause he looks like Jesus,” there are definitely some walkaway jams on I’m Gay (I’m Happy). The degrees of separation between Based God and Lil Wayne are shrinking, and today’s meme is tomorrow’s emcee.