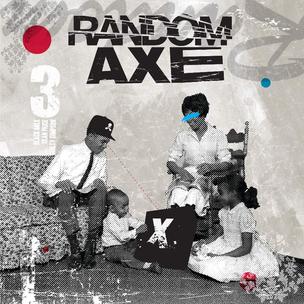 The assembly of Random Axe—the supergroup trio of Detroiters Black Milk and Guilty Simpson, and NYC’s Sean Price—was announced in 2008, but a lot has happened between then and now. Sean Price’s thug-ready music hasn’t changed much, but Guilty Simpson waded in semi-experimental waters by dropping the OJ Simpson album with the envelope-pushing Madlib. Black Milk has produced nearly half a dozen projects since that time, retooling his soul-sampling sound into an amalgam of electronic influences and live instrumentation. Fortunately, Random Axe succeeds because it does exactly what it sets out to do, without any unnecessary complications.

The album gives listeners exactly what they sign up for. Guilty Simpson and Sean Price spew hard-nosed rhymes with a twist of dark humor, while Black Milk eschews his usual soulful, electronic-influenced soundbeds for a collection of tailor-made gritty, percussive bangers. Aside from the powerful conceptual narrative “Somebody, Nobody, Everybody,” the trio keeps it simple by having fun with what they’re good at, and it works. Choruses here are usually mere placeholders for Sean and Guilty to tag each other into the ring, while song titles are quotes from memorable verses instead of song summaries. Group chemistry is shown on brawny offerings like “The Hex”

and “Black Ops,” where threats like “crossbow, cross flow, hit em in the heart” and “I shank ya, sharpened toothbrush in the gut of a wanksta” are paired with “I’m blowing smoke signals at an Indian broad/I told her, ‘I’m unemployed, please give me a job.’” Each member gets solo shine as well: Black Milk lends several instrumentals and beat change-ups sans rapping with “Zoo Drugs” and “Outro Smoutro,” Sean P lends solo bars to “The Karate Kid,” and Guilty goes for self on “Never Back Down” and “4 In The Box.” Black avoids monotony by throwing in beat changes and one-verse songs, making the album a lean 41 minutes long.

Random Axe also succeeds with a great selection of cameos. The guests—all from Detroit or NYC—seem to have been deliberately chosen, and they seem to have just as much fun as Black, Guilty and Sean. Danny Brown quips “used to rock Rockports, swishers and a Carhardt/I would never fuck your bitch, she looks like an aardvark” on “Japhy Joe,” while Roc Marciano sharpens the already-jagged “Chewbacca.”

“Shirley C” sees Motor City vet Fatt Father contributing one of the disc’s most memorable verses with lines like, “Open your pockets, my kid want a some pop and chips.” The most memorable collaboration on the disc comes in “Another One,” while a great verse by Detroit ruffian Trick Trick is upstaged by Rock, who harkens memories of Heltah Skeltah with a triumphant closing verse.

Complaints about limited subject matter can be addressed by Sean Price, who flatly states in “Random Call,”

“you can call me one-dimensional, but ain’t too much talkin’ when the slug gets into you.” Random Axe keeps it simple, and as a result, is simply fantastic. Despite its free-wheeling feel, efficient sequencing and a lack of filler show that it’s not as random as its title implies.