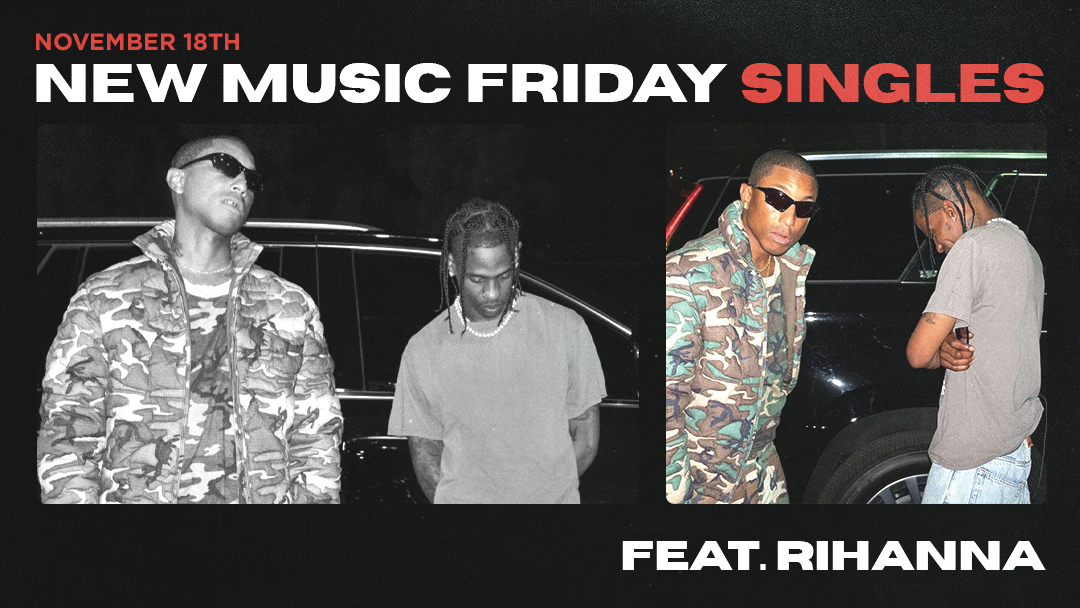 The latest edition of HipHopDX’s New Music Friday singles coverage is serving up multiple musical courses ahead of the upcoming Thanksgiving holiday.

Countless stars make appearances this week, such as Cactus Jack power players Travis Scott and Don Toliver, who share fresh efforts respectively between La Flame’s “Down In Atlanta” collaboration with Pharrell and Don’s “Do It Right.”

Chance The Rapper continues his post-The Big Day comeback campaign with the release of a new single and video called “YAH Know,” while the estate of the late Young Dolph delivers an uplifting posthumous song titled “Get Away.”

Rich The Kid has also shared his comeback track “Motion,” as Top Dawg Entertainment MC Ab-Soul continues to build buzz for his forthcoming album with “Gang’Nem.”

Check out the complete list of singles released on Friday (November 18) below.

Following a delay in releases, a part of their show of solidarity in honoring the loss of deceased Migos rapper Takeoff, Pharrell Williams and Travis Scott have shared their highly anticipated collaboration.

For those who haven’t seen the videos of La Flame performing “Down In Atlanta,” during Primavera music festival in Chile, prepare to indulge in the rich and elevated hybrid house rap vibes the anthem has to offer.

Don Toliver — “Do It Right”

Complete with the viral Tisa Korean dance snippet video, Don Toliver’s “Do It Right,” seemingly has already become an instant hit even before it was ever released. Now, listeners can finally experience the wildly enjoyable bop, which samples The S.O.S. Band’s 1980 smash hit “Do It Right,” in full.

Young Dolph — “Get Away”

West Coast lyricist Ab-Soul continues to hunker down into album mode following the release of his recent single “Do It Better.” Building on to the hype surrounding the highly anticipated follow-up to his 2016 album Do What Thou Wilt, The Black Lip Pastor lets go his “Gang ‘Nem” single.

Fresh off his LeBron James-inspired free agency decision announcement cementing his new deal with RCA Records, Rich The Kid has returned with new music. Peep the heavy “Motion” he’s kicking on the new release above.

Despite his current incarceration, popular New Jersey artist Fetty Wap is serving up new music. Taking inspiration from Masego and Devin Morrison’s original record “Yamz,” the diamond-certified rapper drops his special “Zoomix” of the track with his “Sweet Yamz” single.

PinkPantheress f. KAYTRANADA — “Do You Miss Me?”