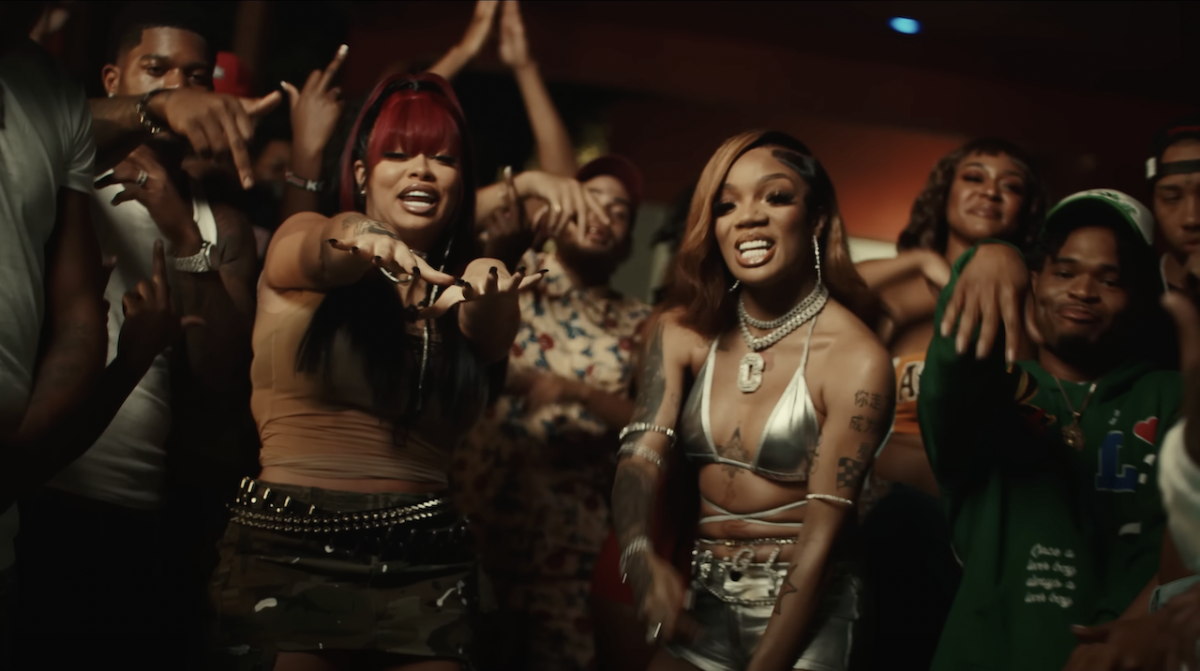 Latto and GloRilla have released the visual for their latest collaboration “FTCU,” believed to be the warm-up to Latto’s forthcoming third album.

Directed by Atlanta-based artist maliaSHUTup, the video picks up where the teaser trailer they released on Thursday (December 1) left off, with Latto and GloRilla linking up for the night and walking into a strip club to find cases of $1 bills waiting.

As they party with their homegirls on stage, the two rising stars deliver bars that play on both meanings of the phrase repeated in the hook: “Fuck the club up.”

Following a quick intro by Gangsta Boo, who also appears on the hook and throughout the first verse, Latto kicks the song off assuring would-be foes that she has no problem pausing the party to address any static.

“Start a bottle war, these bitches barely keepin’ up,” she raps. “Muggin’ like they want some smoke, but they ain’t deep enough / Young, ratchet, rich, and I’m rude as fuck, these bitches know what’s up.”

After replacing her Atlanta partner on the hook alongside her Memphis O.G., GloRilla picks up the baton while keeping the same energy and making it clear that she’s about her business first.

“I can’t walk up in the club if I ain’t get that backend,” Big Glo announces. “They was at the club on live, we caught them bitches lackin’ /Eleven deep up in his booth, we posted like, ‘What’s happenin’?’ / I pray to God a ho don’t run up, all my bitches jackin’”

While she didn’t make an appearance in the “F.T.C.U.” video, Gangsta Boo recently sang Latto’s praises during an appearance on Drink Champs, which she reposted on Twitter on Saturday (December 3)

“I love Latto,” she said. “I fuck with her because she was one of the first females that… Well, I don’t like to say the first, but that caught my attention. And it was Fat Joe on his… is it a podcast that Fat Joe do? He was asking what’s her inspos and she was naming shit. And she was like Trina and she said, ‘And Gangsta Boo.’

“She was one of them ones,” the Queen of Memphis continued. “When people ask [artists] who’s they inspos, especially female artists, they never say my name. Never. But they whole entire cadence… They buy beats from Juicy J, but say they inspired by Lil’ Kim. It’s very interesting.”

GloRilla and Latto first appeared together on the remix to Glo’s hit breakout single “F.N.F.,” which also featured JT.

The duo have been on a run this year. Latto released her second studio album, 777, in March and debuted at No. 8 and No. 15 on Billboard’s Top R&B/Hip Hop Albums and 200 charts, respectively. Latto also grabbed a top three hit on the Billboard Hot 100 chart with “Big Energy” and landed a Mariah Carey feature for the remix that dropped shortly after the album.

After breaking onto the scene with “F.N.F.” this past summer, GloRilla saw her stock rise tremendously with a Cardi-B feature on the hit single “Tomorrow 2,” which dropped in September. Big Glo also just released her debut EP Anyways, Life’s Great.

Both GloRilla and Latto have earned their first Grammy nominations this year. Glo is in the running for Best Rap Performance for her hit single “F.N.F (Let’s Go)” while Latto is grouped in the Best Melodic Rap Performance category for her track “Big Energy (Live).”