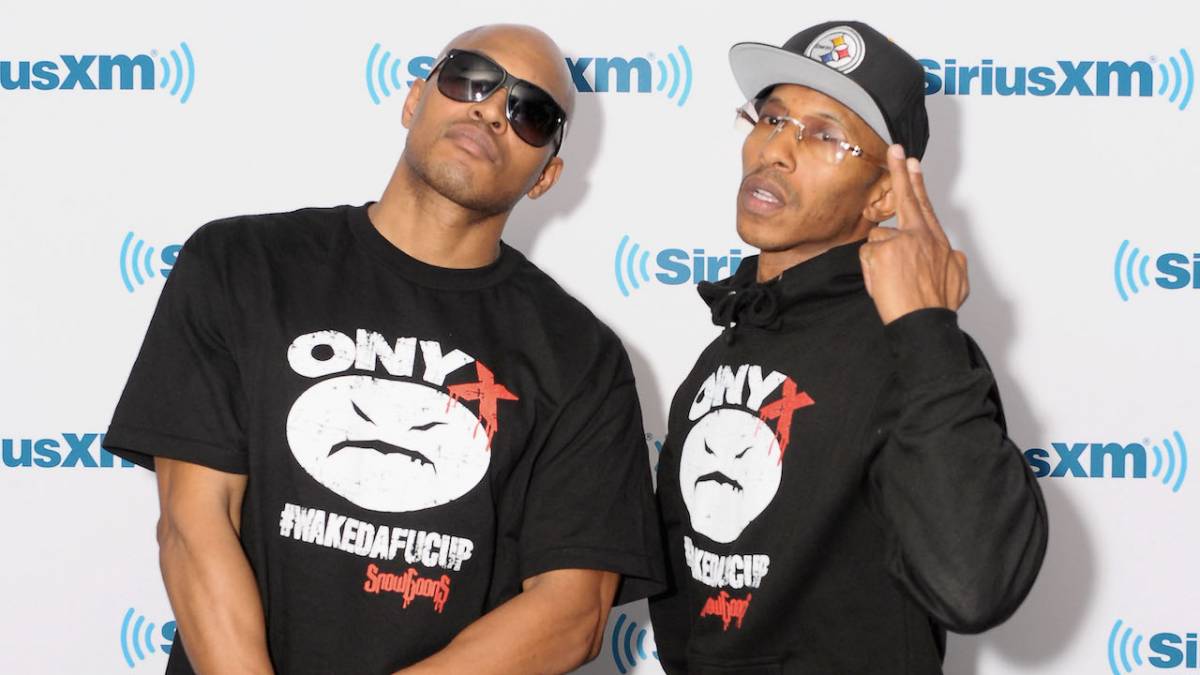 Exclusive – When it comes to high-energy, no-holds-barred, hardcore rap groups that emerged in the ’90s, there’s  Onyx and everybody else. When they arrived on the scene with their bald heads, raspy voices and unapologetic rawness, they took the world by storm, becoming trailblazers in the culture.

Hailing from Queens, NY, the original members of Onyx (Fredro Starr, Sticky Fingaz, the late Big DS, and DJ Suave aka Sonny Seeza) were discovered by the legendary Jam Master Jay of Run-D.M.C. who signed the group to his label, JMJ Records.

Jay helped to produce Onyx’s multi platinum debut album, Bacdafucup, in 1993. Their second single “Slam,” produced by the late Chyskillz, is a bona fide classic that went on to become one of the biggest hits of the year, peaking at number 4 on the US Billboard Hot 100. They followed up with seminal albums All We Got Is Us in 1995, Shut ‘Em Down in 1998 and others, further solidifying Onyx as one of the preeminent rap groups of the 90s and 2000s.

Outside of music, both Fredro and Sticky have amassed several TV and film credits, joining the likes of Will Smith and Queen Latifah as rappers who transitioned to Hollywood. Fredo starred as  ‘Q’ in Moesha for several seasons alongside R&B legend Brandy. He also appeared in HBO’s The Wire, NYPD Blue, Blade, CSI: Miami and also co-hosted Dance 360, a daily, half-hour urban dance show. His film credits include Clockers, Sunset Park, Ride, Light It Up, Save the Last Dance and Torque.

Sticky has appeared in Strapped, New York Undercover, Nash Bridges, and played the titular character in the television series Blade. In film, he starred in Clockers, In Too Deep, Lockdown, Doing Hard Time and Breaking Point, and played “Tyrone” in Next Friday. He also wrote, produced, directed, and starred in two feature films through his production company Major Independents: A Day in the Life and Caught On Tape.

On May 14 Onyx went head-to-head in a Verzuz battle with West Coast legends Cypress Hill at The Forum in Los Angeles. Billed as the “Fight Night Music Boxing Special,” Fredro Star reflected on performing on the popular platform.

“It was Onyx Vs Anybody,” he tells HipHopDX. “We took on Cypress Hill because it makes sense. We knew it was gonna be some high-energy shit. It was the night of boxing and it was crazy. It was an experience. That was one of the biggest things we ever did and to do that with Cypress Hill, because I’m a fan of Cypress, was wild. What’s crazy is we didn’t know until afterward that it wasn’t on Instagram like the other ones.”

Despite the confusion with the new Verzuz platform logistics, Onyx solidified their reps as electric live performers. The group pioneered having mosh pits at their concerts where they were stage diving and slam dancing like the popular rock acts of the time, which was rare in Hip-hop. Currently, Onyx is developing a documentary on the history of mosh pits in hip-hop.

“Me and Sticky are producing a documentary called Slam: Mosh Pits in Hip-Hop,” Fredro says. “The slam dance culture started before us and it’s still going so we wanted to give a clearer picture on how it started on some factual shit. Redman, he been crazy and he comes up in the documentary and so does Cypress Hill. We’ve been working on it for a while doing the research and it’s almost done.”

On the Friday before the Verzuz, Onyx released their ninth studio album, Onyx Versus Everybody. Almost 30 years since their debut, Onyx still have raw energy, undeniable boldness and their pulse on the culture. The 10-track LP is a cohesive body of work that is full of street tales featuring appearances by Big Twin, Ricky Bats, Harrd Luck and Termanology. If you’re a diehard fan of Onyx, this is one of the group’s best projects in their legendary career. According to Sticky Fingaz, the album was completed in just two weeks thanks, in part, to the group’s new songwriting process.

“We didn’t really write anything,” he recalls. “We wrote a little bit but you know, we got a new technique where we just vibe and get on it. We recorded everything in the Batcave. That’s Fredro’s studio.”

Fredro says their classic “Last Dayz” from their sophomore album, was the inspiration behind the production on their new album.

“‘Last Dayz’ is a Hip Hop classic beat you know? It was in 8 Mile and that made it even more legendary so I wanted to get the vibe on the album,” he says. “I know what I know when it comes to making beats and my style never changed. That’s why it sounds like 1996 because I didn’t change the way I make my beats. It’s the same ni**a who made ‘Last Dayz,’ ‘Walk in New York,’ and ‘Evil Streets.’ Nothing changed.”

When it comes to producing, Fredro claims to have the hardest tracks in the game and he brought that same energy to the new album.

“I don’t get nothing from a beat machine,” he added.  “I don’t even use a hi-hat. I got my own drums. I play my own drums. My shit is dirty. I need it to be dirty. My shit is filthy. I got the nastiest, grimest, beats in Hip Hop.”

With their signature hardcore lyricism and gritty production, Onyx Vs Everybody makes a strong case for being named among the best albums of  2022 so far, but that isn’t the recognition they seek.

Watch the video for “Last Dayz” below.