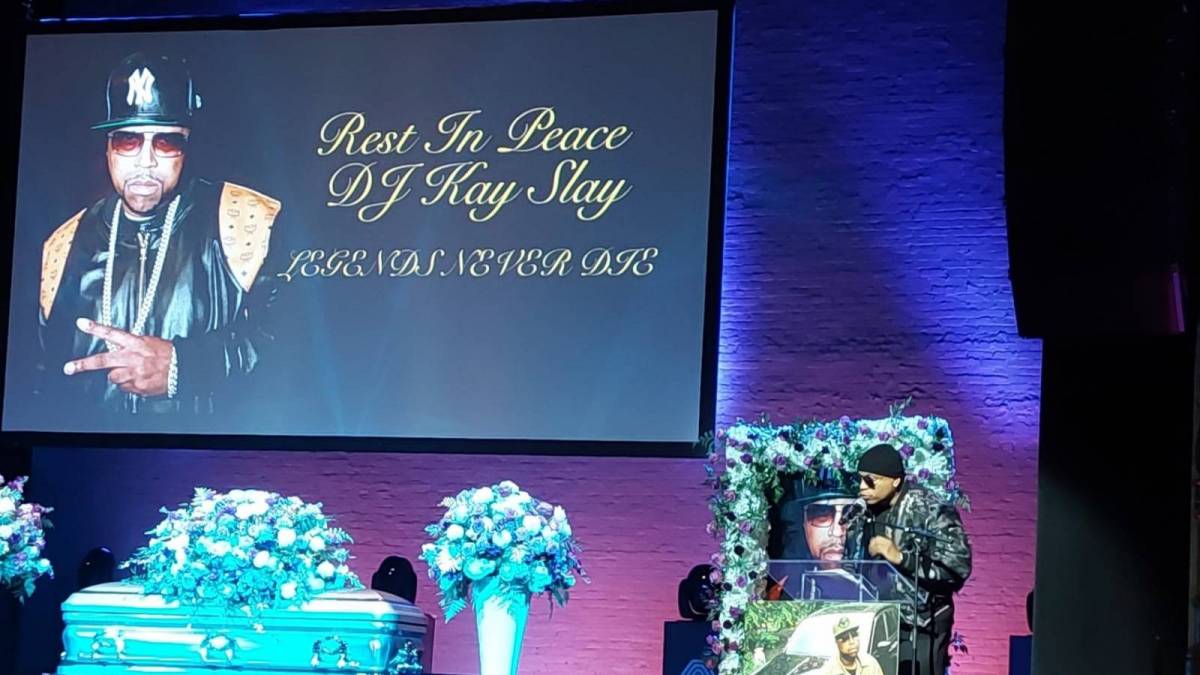 DJ Kay Slay was laid to rest on Sunday (April 24), exactly one week after he lost his battle to COVID-19. Ahead of the interment, a memorial was held at the famed Apollo Theater in New York City, with many of Kay Slay’s close friends and family in attendance.

Speaking to HipHopDX, Pete Nice recalled Kay Slay’s deep history in the culture as he vowed to keep his name alive.

“Rest in peace my brother Kay Slay,” he tells DX. “You were Hip Hop. People don’t even realize the work you put in as DJ Kay-Gee in ’83 with the Dollar Bill Crew while you were writing. They don’t know how you were sneaking into Flash and the 3 MCs jams in 1978 when you were 11 or 12. Beyond those early days, you went on to have one of the most impactful careers in the history of Hip Hop. Over 40 years of work, memories and music. You will never be forgotten.”

During the service, Grandmaster Flash & the Furious 5 legend Melle Mel shared a few words. With a giant, rose-covered photo of Kay Slay and gold casket looming in the background, Melle Mel had the crowd roaring with his commentary.

“He did that! Kay Slay, he did that! And he always kept me in the loop. But I didn’t know that he was the same as me until a couple of days ago. And thing that I want to convey to y’all, after all that was said and done, and after all that’ going to be said and done about this great man, he put on a show. He had a job to do and he did his job. And what I’m asking y’all, Did y’all have a good time? Did you enjoy the show!? Did you enjoy the Kay Slay parade?!”

DX caught up with Melle Mel just as the “after party” was getting started and he expounded on the love he has for DJ Kay Slay.

“We had to show up for our brother,” Melle Mel says. “Before Hip Hop became what it was today … see, what I was trying to point out is that skinny kid was once all of us. That’s who we were and then we grew up and grew into the game. Whether we had to pass the baton or not, that doesn’t matter. The fact is we did what we did and Kay Slay did what he did and he deserves all of us to come out, and that’s what I did. He’s gonna live on because we fly the same flag and it’s called Hip Hop. Kay ain’t never going nowhere. That’s our brother.”

SVP A&R Of Republic Records, Amina Diop, adds, “Kay Slay was a true Hip Hop Enthusiast. From graffiti, to DJ’ing, to production, to media publishing, Kay was always able to bring HipHop into our lives in an organic raw way. Kay has selflessly helped so many of us in the game. We are blessed to have experienced the Drama King, Harlem’s DJ. Kay Slay was and will always be Hip Hop’s Champion. I love you and will miss you…until we meet again.”

Van Silk, who was extremely close with DJ Kay Slay, plans to carry on Kay Slay’s legacy with the help of his friends and family. As he tells DX, “We all celebrated the show Kay Slay left us as Melle Mel stated. I’m proud to say thank you Kay Slay. The wonderful team of people associated with Slay — from his business partner Jarrod ‘General’ Whitaker, Big Gene, Papoose, Shea the special one and especially Slay’s mother Shelia Grayson and the Grayson family and friends.

“My brother is still here and his legacy will forever continue. Slay trend setting style and his contribution to hip hop is something we can not over look. His legacy will be preserved at the Universal Hip Hop Museum respectfully. His estate is well run and organized by great people Kay Slay trusted. Straight Stuntin Magazine will live on through Slay’s vision. I miss my brother and as LL COOL J asked me today, ‘Am I OK?’ Yes. Kay Slay the Drama King has not left the building!”

Fellow Hip Hop legend Doug E. Fresh couldn’t attend the services in person but sent a video along addressing all of Kay Slay’s loved ones.

“This is Doug E. Fresh sending love and respect to Kay Slay and his family,” he said. “Harlem’s own Kay Slay. Hip Hop’s own Kay Slay. You will always be remembered my brother. Much love my brother and I know the creator is very, very pleased with you.” 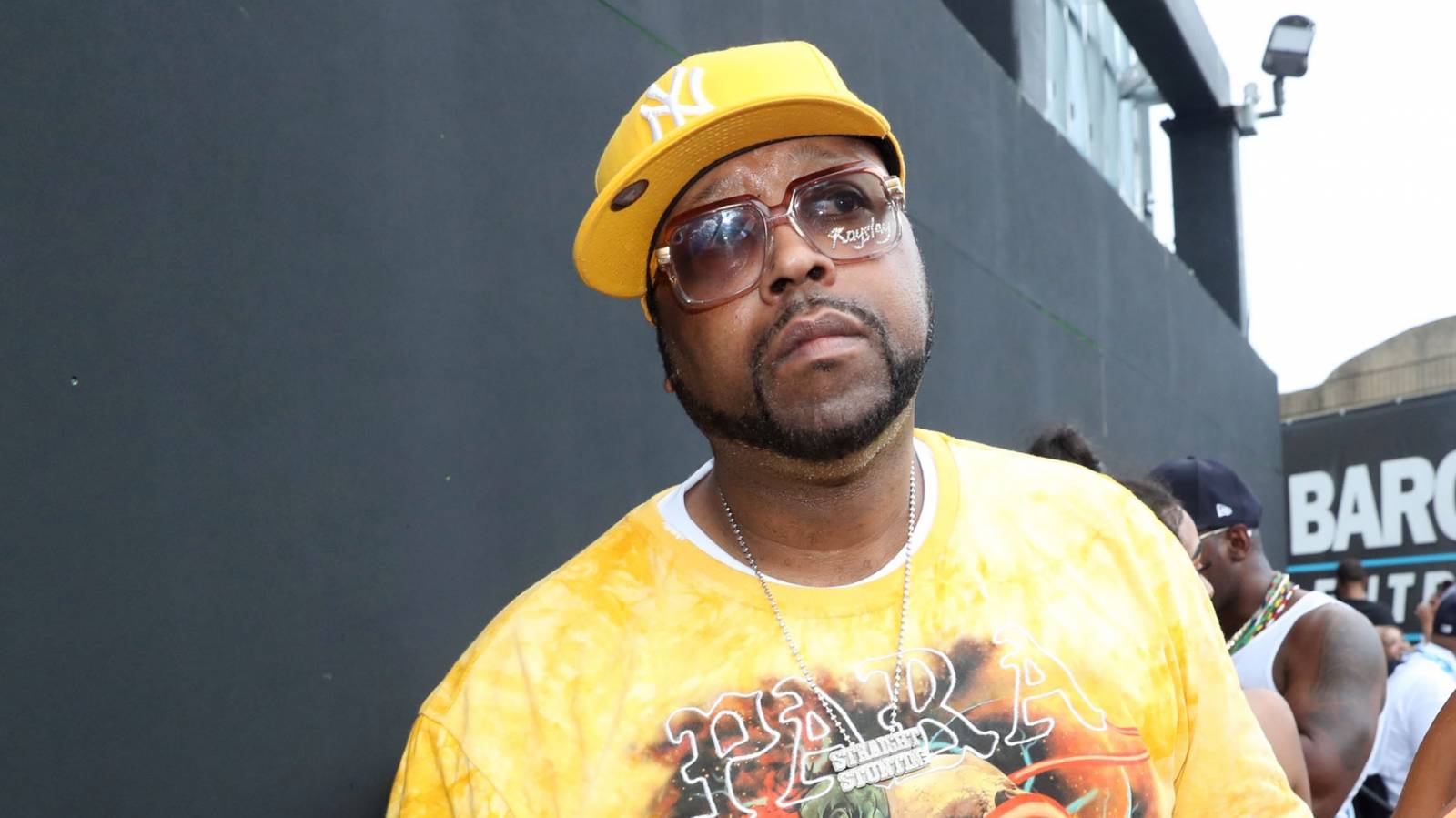 DJ Kay Slay was also a prolific graffiti writer throughout the 1980s and made an appearance in the iconic 1983 film Style Wars under his moniker Dez. Naturally, murals in his name are popping up in New York City, another testament to his lasting legacy. As Executive Director of Universal Hip Hop Museum Rocky Bucano sums up, “Kay Slay was more than DJ, he was one of the greatest cultural ambassadors of Hip Hop.”

HipHopDX sends our condolences to all of DJ Kay Slay’s friends and family. We thank him for all he did for Hip Hop culture. RIP.