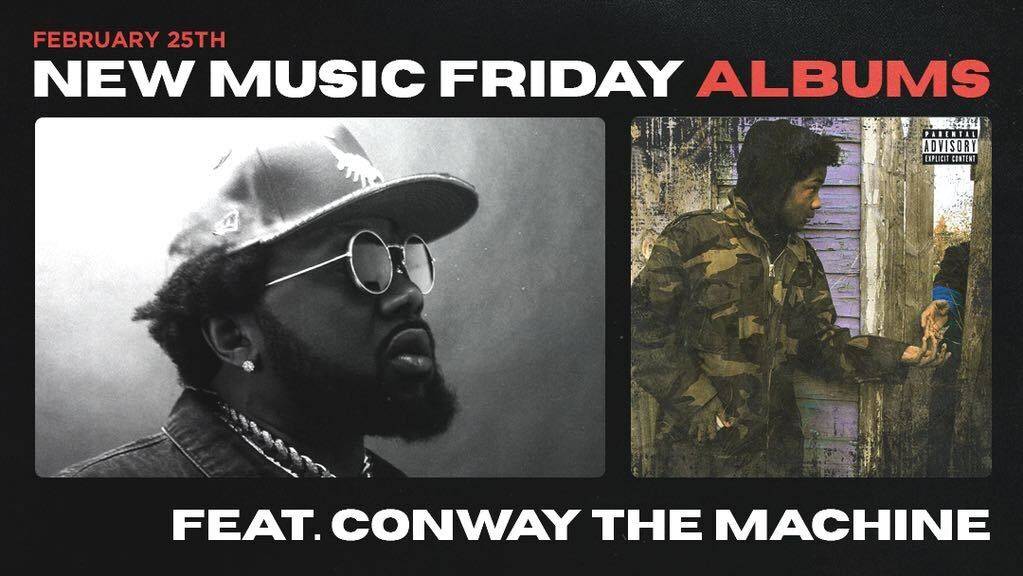 At times like these when the world finds itself in a state of chaos and perpetual crises, speaking about music can seem to be pointless. But music has long served as a needed distraction and escape from the realities of the world, and that escape should be cherished.

This week’s edition of New Music Friday certainly has enough substance to keep you calm and focused on the positives of life.

This round-up starts with the booming flows of Griselda Records rapper Conway the Machine’s God Don’t Make Mistakes before transitioning to the long-awaited album from EarthGang titled GHETTO GODS.

Also included on this list are albums from JPEGMAFIA, WiFiGawd, Kodak Black and many more.

The Griselda movement began with the already cult-classic 2019 album WWCD, but the core members (Benny The Butcher, Westside Gunn and Conway the Machine) have only continued to grow from there. God Don’t Make Mistakes, the most recent release from Buffalo, New York rapper Conway the Machine is not only his first release of the year, but it marks his debut album on Shady Records.

The entire Griselda crew is known for being extremely prolific, but the speed at which they release music rarely results in a reduction of quality. Following up his excellent La Maquina, Conway’s newest album is loaded with boom-bap flows flipped for a modern audience. Also included on the album are guests ranging from Lil Wayne, Rick Ross and Jill Scott.

After several delays, Dreamville’s EarthGang has finally arrived with GHETTO GODS. The Atlanta rap duo, comprised of Olu and WowGr8, were last seen in rap’s discourse for their contributions on supergroup Spillage Village’s Spilligion, but it’s been since 2019’s Mirrorland that EarthGang released a solo project.

Leaning into their penchant for soulful and funk-heavy instrumentals, exuberant raps and dramatic performances, EarthGang’s latest is a return to form for a duo which has been heralded as one of Dreamville’s best acts, but has been very inconsistent with their releases. With features from label mates such as J. Cole, JID and Ari Lennox (not to mention verses from the likes of Future, Baby Tate and CeeLo Green), GHETTO GODS is not to be missed.

Kodak Black – Back For Everything

Florida rapper Kodak Black typically finds himself in the media for extra-musical issues. He’s known for creating a scene, from his strange sexual encounter at a hockey game to theatrics ranging from flushing money down the toilet to Instagram live tirades.

But Kodak’s attempting to refocus the conversation around his music, releasing Back For Everything, a 19-song LP which includes only Lil Durk as a feature.

JPEGMAFIA is a polarizing figure in Hip Hop. His oddball raps and eclectic beat selection aren’t made for everyone. But spending time with JPEGMAFIA’s music reveals a fascinating world full of textures, and stream-of-consciousness raps.

OFFLINE!, the latest release from the Brooklyn-born MC, is a bite-sized EP which carries his first single of the year, “HAZARD DUTY PAY!.” Listeners can expect to hear sample-heavy production from JPEGMAFIA himself and complex lyrical experiments which often take multiple listens to fully comprehend. Though his music may take work, listening to  OFFLINE! is a deeply enjoyable experience.

WiFiGawd might not have the most listeners yet, but the Washington D.C. rapper has been a cult-favorite for years, and with his latest album CHAIN OF COMMAND, he’s aiming his sights on a much larger audience in the coming year.

With production from New York producer Tony Seltzer as well as a handful of self-produced beats, WiFi expands on his militant and hazy sound. From the explosive and symphonic sounds of “365” to the dark and digital thrall of “God of War,” if Wifi isn’t yet on your radar, get ready for that to change.

U.K. rapper Central Cee first began to gear up for the release of 23 earlier this year, dropping songs such as “Khabib,” “Cold Shoulder” and the already wildly successful “Obsessed With You.” Now, the full project has been unveiled, which places Cee amongst booming 808s and grimy sounds from Drill music.

Cee, who released his debut album Wild West in 2021, is still beginning to break into the U.S. marketplace, but 23 is a great step in the right direction.

Glasper has a knack for building immersive sonics which whisk the listener into whatever world he desires. Take for instance the self-titled album from Dinner Party, which claims Glasper a founding member alongside 9th Wonder, Kamasi Washington and Terrace Martin. Black Radio III is handled largely by Glasper alone, but it’s still a treat to hear an intergenerational collaboration of this magnitude.

Don’t forget to stream CJ Fly’s the PhaRaOh’S return and There in Spirit by Homeboy Sandman, this week’s Honorable Mentions.