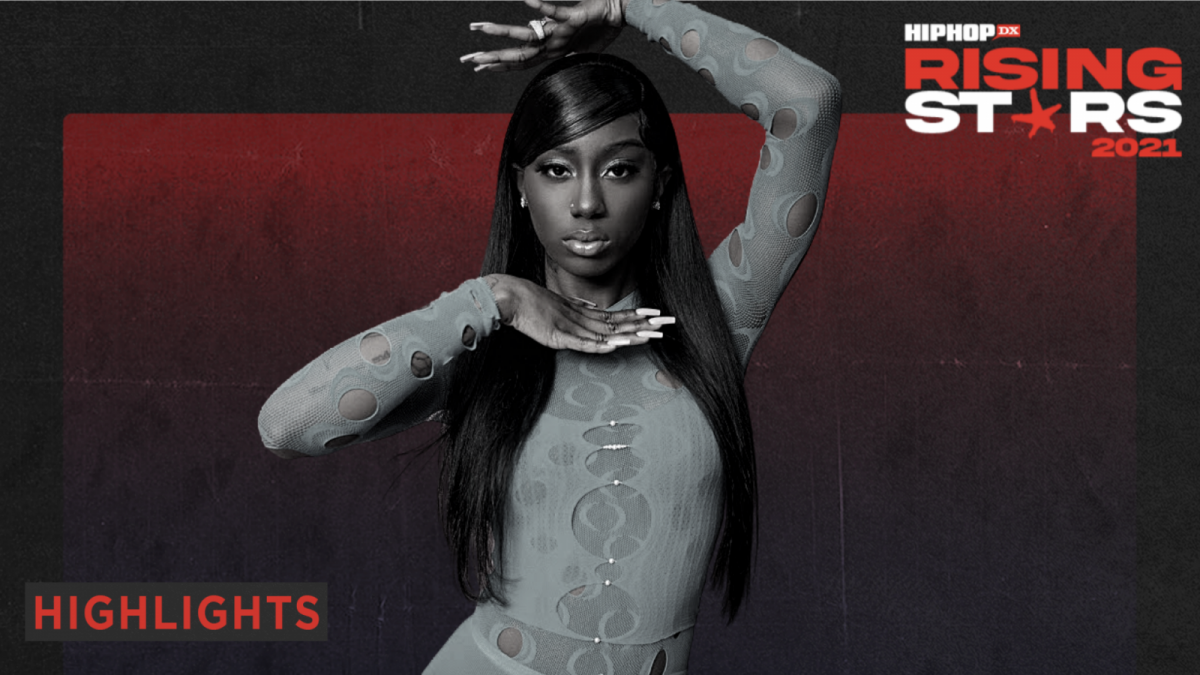 As the 2021 HipHopDX Rising Star year comes to an end, a few of the Rising Stars have decided to meet new milestones before the ball drops.

“The designs I dreamed up with Katie McIntyre are out now,” Flo wrote. “Find our limited edition Modern Opulence collection in The Showroom, presented by @AmazonMusic x @HYPEMAKER. Link in bio to get yours.”

Scoring exclusive merchandise has always been a way to celebrate a fan’s favorite music artist but mostly while they’re on tour. Due to time and technology progressing, artists have now found creative ways to drop fan merchandise more frequently.

Even though touring is still probably the most efficient way to get the most exclusive items from artists, Amazon Music has now taken the liberty to create the first of its kind. Amazon Music’s “The Showroom” is currently offering fans merch for not just one artist but three. Each of the capsule collections were designed by a blossoming streetwear designers — which truly bridges the minds of the next generation of music artists and fashion designers.

Amazon Music partnered with HYPEBEAST (a website geared towards men’s contemporary fashion and streetwear) to introduce the innovative idea, and together, they’ve produced capsule collections for Lucky Daye, Fousheé and Flo Milli so far.

“The collections the artists and designers created aren’t just beautiful pieces, they’re the latest way Amazon Music is making it easier than ever for artists to build their business and make their visions a reality,” Sean McMullan, Director of Artist Product and Services for Amazon Music, said in a press release.

Just in time for the Winter, Flo’s line includes loungewear that can be “dressed up or down” with graphic hoodies, t-shirts, sweatpants and shorts ranging from $35-70 dollars.

On each artists’ page, not only can fans find exclusive merch, but they can also stream their music in one centralized place.

In Other News Blxst Lands a Rick Ross Album Feature

2021 HipHopDX Rising Star Blxst made an Instagram announcement on Friday (December 10) revealing he’s featured on Rick Ross’s 11th studio album Richer Than I Ever Been.

Blxst, who’s been killing his Rising Star year with projects, music videos, streaming, nominations and touring, is featured on “Made It Out Alive,” which is the eighth track on the 12-track album.

Blxst sings on the chorus, “From nothin’ to everything that I asked for, from food stamps to stamps on the passport/Brown bag full of cash and the dash, hit the gas, get the laws off my ass./Remember all them nights we didn’t have no lights, tryna be a star, I had to earn my stripes, took a wrong turn, had to make it right/Don’t cry ’cause I made it out alive.”

Stream “Made It Out Alive” above.

Toosii wants to recruit WizKid to his fire track “Somebody.” (Listen here.)

Blxst is one of 10 up-and-coming rappers named to HipHopDX’s 2021 Rising Stars! For more info on Blxst and the rest of the talented Hip Hop bunch, read about them here.