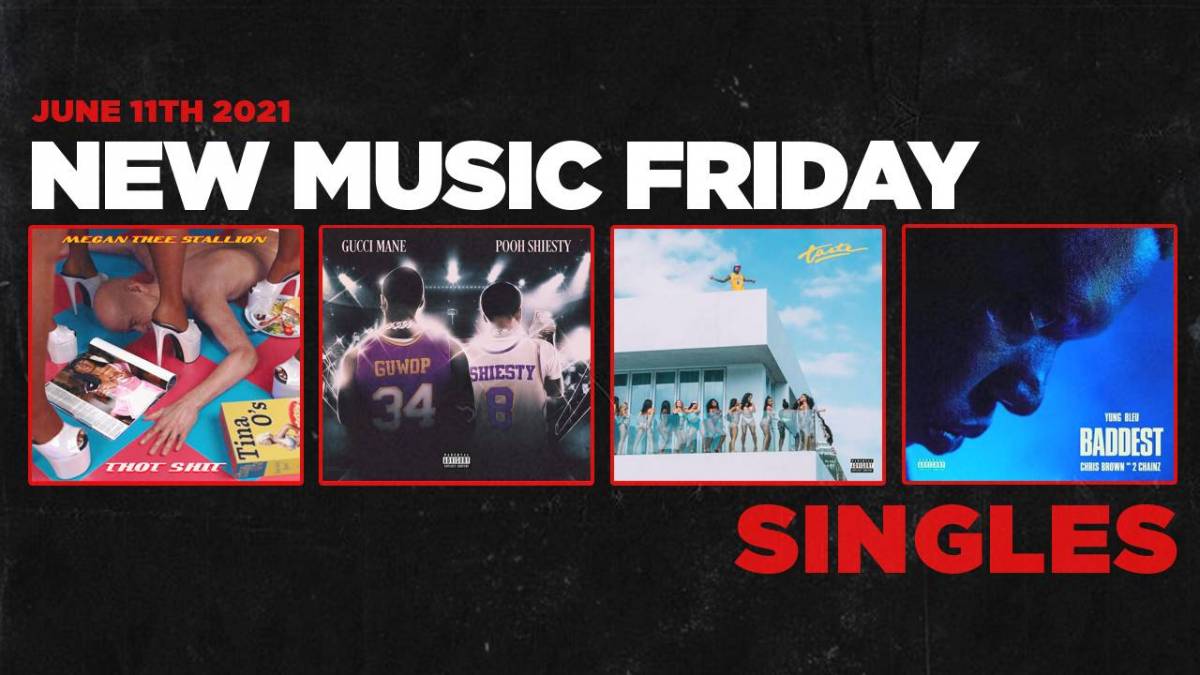 If you’ve been building the perfect Summer Playlist, you’re going to want to take a look at all of the new singles which dropped on this New Music Friday. Loaded with palpably sunny sounds, this week brought a slew of new singles from industry veterans and newcomers alike.

To start, Don Toliver, Lil Durk and Latto came together for “Fast Lane,” one of the 14 songs on the latest installment of the Fast and Furious franchise, F9. We also received the highly anticipated “Splash” from Tyga and Moneybagg Yo.

If you’re looking for trap anthems, press play on Gucci Mane and Pooh Shiesty’s “Like 34 & 8” or the remixed version of “Trust Issues” from Fredo Bang and NLE Choppa.

This week was also highlighted by two phenomenal upcoming artists; Los Angeles’ Saint Bodhi for with new single “Heaven Is Real” and the stunning “Young Thug” from Bbyafricka.

We’re just getting started, so keep reading for our complete coverage of this week’s New Music Friday.

Don Toliver is one of the top tier makers of summer anthems. His dreamy vocals are best heard in the warm air, so make sure to step outside and take a walk while listening to this one. Made for the latest installment of Fast and Furious (F9), “Fast Lane” also brings features from Latto, and arguably rap’s hottest artist, Lil Durk.

While we’re all waiting for the follow-up to Toliver’s 2020 project Heaven Or Hell, this will suffice in the meantime.

HipHopDX Rising Star Yung Bleu has been on a tear ever since he received his Drake stimulus in the form of the viral “You’re Mines.” While sudden success often can lead to a quick burnout, Bleu took full advantage of the opportunity, going on a full-force run and racking up millions of streams in the process. “Baddest,” the latest single from the Mobile, Alabama MC includes verses from Chris Brown and 2 Chainz and production from an All-Star cast of Hitmaka, OG Parker, Romano and Mike Woods.

As it turns out, sweeping, moody R&B instrumentals serve as the perfect backdrop for Bleu’s baritone vocals.

As Gucci Mane continues his career shift into a more executive role, he doesn’t want his listeners to forget his rapping talent. Sure, he’s responsible for signing some of the hottest acts from Pooh Shiesty to Foogiano, but Guwop hasn’t forgotten his roots. “Like 34 & 8” is nostalgic of the pre-prison Gucci: belligerent, stream of consciousness verses rapped with the confidence and swagger of a mob boss.

Pooh Shiesty has unfortunately found himself in the news frequently for his activities outside of Hip Hop, but the Memphis MC can rap better than most, and he has a knack for flexing that fact again and again, most recently on “Like 34 & 8.”

Megan Thee Stallion might be linked up with her new boo, rapper Pardi, but Hot Girl Summer must continue. “Thot Shit,” the Houston rapper’s latest release, is a testament to her unapologetic attitude and her vicious flow both. As the “Body” rapper’s career has progressed, she’s only continued to find her voice and has become more and more confident in herself as a musician and person. Add “Thot Shit” straight to the summer playlist, the artist has a hit yet again.

Summer doesn’t truly begun until Tyga drops. The Compton-born rapper has been a staple of warm months for over a decade; from 2009’s “Cali Love” to last year’s “Ibiza,” Tyga historically runs June. This year’s no different, with the “Taste” rapper unleashing the hotly anticipated “SPLASH.”

Featured on “SPLASH” is Memphis rapper Moneybagg Yo coming fresh off his first Billboard #1 album in the form of A Gangsta’s Pain. Full of money, girls and jewelry, “SPLASH” is on its way to becoming one of the defining tracks of this summer.

Love him or hate him, French Montana knows his way around a hit. During his ten-plus-year run in the rap game, the Moroccan-born, Bronx-raised rapper has amassed a collection of chart toppers that could rival most of his peers. “FWMGAB” is no different: Montana has the formula and it seems to continue to work exceptionally well.

With production from StoopidOnDaBeat and Butter Beats, Montana’s latest single puts to rest any questioning of the veteran’s current relevance.

We couldn’t end before doling out our weekly Honorable Mentions. This Friday’s recipients include Kari Faux for “Outta Sight” and DreamDoll with her latest single “Try Outs.”