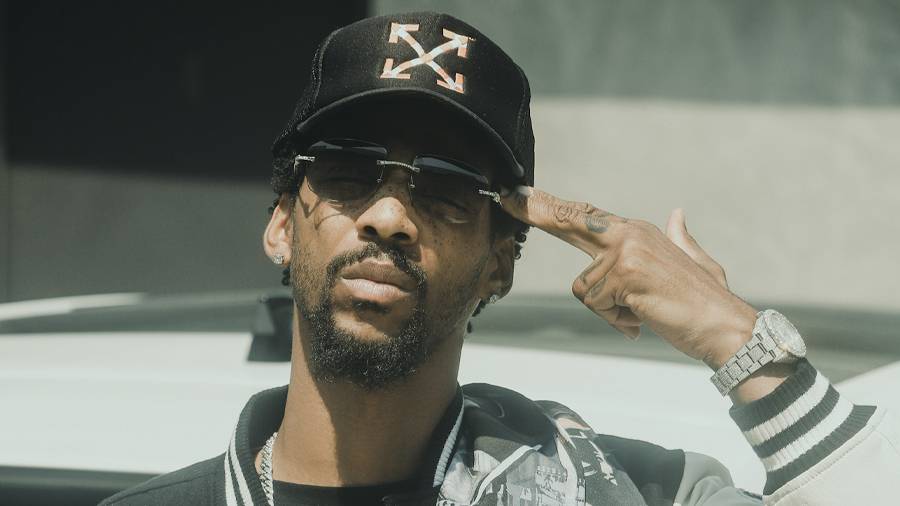 In the Christopher Nolan film The Dark Knight Rises, the villain, Bane, utters the haunting quote, “You merely adopted the dark … I was born in it, molded by it.” After a conversation with Detroit native and Griselda artist Boldy James, it becomes eerily clear how well that statement can explain Griselda’s allure as a whole and why Boldy can integrate so seamlessly within it.

Authenticity and a stark underlying sense of pain are tones that often manifest from records dropped under the Griselda umbrella — something that the core squad and small circle of affiliates never have to fake. They have indisputable stripes to prove as much.

Though Boldy is the sole imprint signee to come up outside of the Buffalo bubble, the laid-back MC is quick to point out that life in the streets of Detroit isn’t dissimilar.

“Buffalo and Detroit aren’t that different … we think similarly,” Boldy explains to HipHopDX. “Everybody is real egotistical. Real foolish pride. Egos crashing, shit getting in the way and guns come out.”

The lifestyle he describes is now in his rearview, as his career (which spans over a decade on wax) is finally on the wave it rightfully deserves. “I just rap about past experiences, make good music and keep it as artful as possible,” he says. “I’m not trying to create any more problems in the streets.”

Though indirectly, he seems to point out a delineation between real street rappers and those who (like Bane suggests) are merely adopting the dark.

“Just making the music doesn’t create as much of a problem as the niggas trying to prove their music is real,” he notes. “They go out there and do dumb shit, like, ‘Oh, I live this life.’ That shit speaks for itself.”

He adds, “Any nigga that classifies himself as a street nigga, you gotta take care of your responsibilities.” As he explains, if you’re someone making street money, and not using that money to get out of that life, you’re hustling backward. “Get in and get out.”

It’s a different perspective than you tend to hear from some of today’s rap trappers; but, the difference is Boldy’s music isn’t made in an attempt to promote a lifestyle, but rather a cathartic outlet for someone who truly lived out their bars firsthand.

“I don’t give a fuck about my fans relating to my music — nine times out of ten they can’t,” he says. “But, they can feel my pain. They don’t be selling bricks. Niggas ain’t out here on the road with no big bag of pills and shit, man.

“That’s what a nigga come from him,” he adds. “Some people may have more of an imagination. That’s not me; I don’t have too much of an imagination. I just have a very busy memory, and I like to be very descriptive in how I tell you about my timeline.”

The Versace Tape is his first official release on the almighty Griselda, but as he reveals, it was supposed to be his second.

“I did work the first day of the year,” he says. “I did like eight songs and then came back to Atlanta to do The Versace Tape.”

Viral YouTuber turned producer Jay Versace, one of the many talents tapped by Westside Gunn over the past year, had never met Boldy face-to-face until after this project was created. The interesting — and remote — pairing was a brainchild Gunn himself orchestrated. He was even seen thanking the duo for trusting his vision throughout the process.

“Gunn is a genius at curating people together,” Jay Versace told HipHopDX of the pairing. “For him to bring Boldy and I together was fully something that only he would have put together.

“At first I was curious about how my sound would collide with his but it turned out to be a classic.”

While the pair may appear slightly disjointed based on their respective backgrounds, their musical chemistry is seamless. The project is just the beginning for both of them at this level — with Boldy particularly stating he’s more locked in musically than ever before.

“This is the most focused I’ve ever been with the music. So that’s likely why I’ve gotten so much traction,” he says. “I’ve always been in that position, even with the Cool Kids … if I would’ve just put forth more effort, my music would have gone in a different direction.”

He got his first taste of recognition through his Cool Kids affiliation, via his cousin Chuck Inglish. After building some buzz, he dropped his Alchemist-produced debut LP My 1st Chemistry Set, and he also became one of the first three signees to Nas’ Mass Appeal label.

However, he says his slow-burn since 2013 was the result of a continued connection to his street life.

“Me being always caught up in simpleminded street shit, trying to make money right here, I cut myself out of a lot of opportunities … but I just started to make the most of it,” he admits. “I have been in predicaments where I didn’t know which way the motherfucking coin was going to flip.

“So, you know, now it’s looking good with this rap shit.”

As is characteristic of Griselda, the 38-year-old MC has a lot of meals in the kitchen.

“I got all types of works. [Alchemist] and I got another plate. I got some Daringer records in the stash. The list goes on, man. You’d be surprised to know I got a whole J Dilla project … unheard J Dilla.”

When asked if he could explain how a project produced by Dilla came to fruition, he ominously notes, “I know people who know people, you know. They give me work on the strength.”

Boldy made an appearance on the late-producers’ second posthumous album, 2012’s Rebirth Of Detroit, alongside Chuck Inglish on the song “Detroit Game.”

An exciting and often overlooked narrative from Griselda’s success is that it shatters long-held age barriers in Hip Hop, with the central trio breaking through in their mid to late 30s. Boldy humorously views it as a Benjamin Button effect.

“If you notice, niggas like Conway, Benny and I, like we aging backward. We already froze time,” he says with a laugh. “We have been through so much … so much life in the street that this shit is like highway robbery.

“I got this shit for the rest of my life. Cause I didn’t make it when I was younger … I started getting traction as I was getting older,” he explains. I’ve lived so much life; there are so many stories I can grab from when making my music.”

With so many experiences shaping his past, and a newfound focus anchoring a transformative time in his career, it feels like Boldy’s story would make an engaging book. Something he says he’s very open to, just not in the immediate future.

“One day, I just got to find the time to sit down and do it,” he says, adding that he’s trying to spend more of his free time doing things that matter most.

“I got to spend time with my son,” he says. “I got to teach him how to shoot that basketball.”

Stream Boldy James and Jay Versace’s The Versace Tape below.