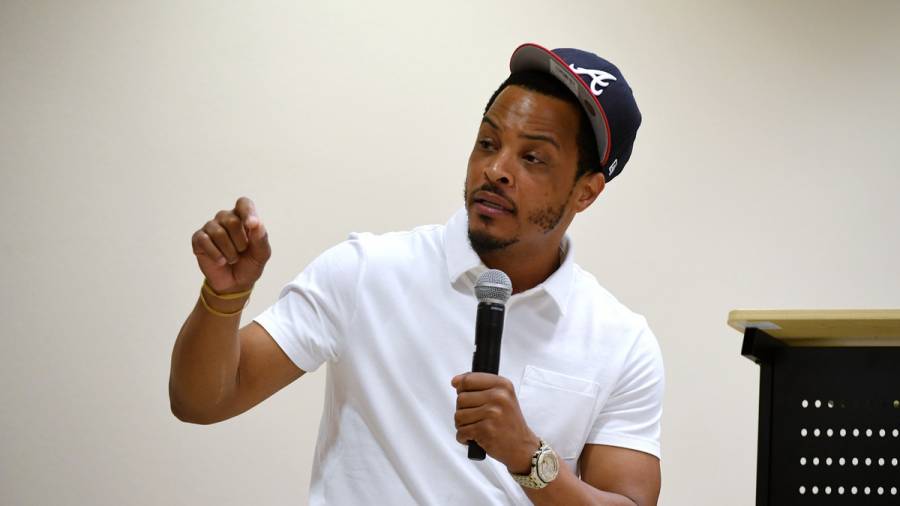 Editorial – T.I. is once again being accused of snitching after a Crime Stoppers campaign video he participated in resurfaced online. 50 Cent, who Tip challenged to a Verzuz battle, made the situation worse by sharing the clip on his popular Instagram account.

But T.I. has vehemently denied the allegations, just as repeatedly has in the past. He responded to 50’s post by taking it as accepting his battle challenge and reemphasized he’s no snitch.

“As far as this clip goes…it’s cute… old,outdated,& in poor taste (much like your catalog @50cent)… however I prefer FACTS‼️” he wrote. “AND THE FACT REMAINS….I HAVE NEVER GIVEN ANY INFORMATION TO ANY FORM OF LAW ENFORCEMENT AT ANYTIME IN LIFE TO GET ANYBODY ANY TIME FOR ANY CRIME‼️ Supreme told me to ask @50cent if he can say the same???”

I'll take this as an acceptance of this catalog challenge. YEEESSSSSIR-SKI‼️ @verzuztv @therealswizzz @timbaland WE GOT HIM‼️😎HE BIT THE BAIT‼️SET THIS SHIT UP SO I CAN FINALLY SHUT THIS WATERMELON HEAD,INVISIBLE NECK ASS NIGGA UP ONCE AND FOR ALL‼️ As far as this clip goes…it's cute… old,outdated,& in poor taste (much like your catalog @50cent😉)… however I prefer FACTS‼️ AND THE FACT REMAINS….I HAVE NEVER GIVEN ANY INFORMATION TO ANY FORM OF LAW ENFORCEMENT AT ANYTIME IN LIFE TO GET ANYBODY ANY TIME FOR ANY CRIME‼️ Supreme told me to ask @50cent if he can say the same??? 🤔 WELL THATS ALL I HAVE TO SAY ABOUT THAT SO…. let's set this date & select ya songs off that 1hot album you got & let's lay your lil overrated, outdated, steroid inflated ass catalog to rest. RIP to @50cent catalog 🙏🏽 I seen you bully all them NY niggaz for years… 👑NOT DA KING THO NIGGA👑‼️ "You Got Da Right 1" #BringMeDaBully😈

Despite the persistence of the snitching accusations, no paperwork has ever surfaced to prove T.I. actually did. In fact, Tip’s been outspoken against snitches and even got rid of an artist from his Grand Hustle label after learning the rapper was a DEA informant.

Alfamega signed with T.I. in the mid-2000s and — on the surface — appeared to bring street cred with him. Tip gave the Atlanta-bred rapper a high profile showcase on the 2007 single “Hurt” with Busta Rhymes, but everything came crashing down at the end of the decade.

In 2009, The Smoking Gun exposed Alfa for working with law enforcement after being sentenced to 110 months behind bars for a federal gun charges in September 1995.

“Even though all our artists and employees are asked by us to be honest and open about their past history, at no time did Alfa disclose to me or Grand Hustle what has now appeared in the media,” he said. “He essentially deceived us by failing to fully disclose the truth about his past, and there is no place in our organization for dishonest and misleading behavior.”

Tip noted, “As I have always said, you must take responsibility for your own actions. We at Grand Hustle can not support or condone the blaming of others for our own mistakes. I hope and pray to God, bless his savings plans, but I don’t foresee me or my company playing a role in his personal or professional business.”

A year later, T.I. briefly addressed Alfamega’s departure in a chat with DJ Envy. But rivals such as the late Shawty Lo continued to hold the embarrassing moment over his head in spite of Tip essentially ending Alfa’s career.

Aflamega proved to be a stain on T.I.’s track record, but he’s been plagued with his own allegations of snitching stemming from his 2007 arrest for attempting to buy machine guns and ammo from undercover agents. He agreed to a plea deal in 2008, getting a lighter sentence despite facing up to 10 years in prison. He was ultimately sentenced to 366 days prison behind bars in 2009 but got out early on good behavior.

The aforementioned 50 notably referenced T.I.’s sentencing on the 2008 G-Unit song “You So Tough.” He rapped, “What’s today’s mathematics? Shit ain’t adding up/Get knocked with 10 machine guns, only get 12 months/Oooh weee, don’t talk to me, you talk to him, you talking to them/I got the best lawyers money can buy/They said they would’ve got me 10, or maybe nine/I said, ‘How do you explain how homie breeze?’/They said keep ya mouth shut or you eat the cheese.”

This seemingly generous plea deal resulted in the snitching allegations against Tip, which have been promoted by the likes of Spider Loc and Wack 100. But T.I. has insisted he never snitched, pointing to inmates approving of him after checking his paperwork in prison.

“I’ve always been in [general population],” he said on Hot 97 in 2012. “All the time. I turned in my paperwork. When you turn in your paperwork, it’s called a paperwork party. They look at it on the yard. Everybody get to observe it and whatnot. They know exactly what to look for.”

He added, “Everybody wants to believe that because if they would have got caught in them circumstances, that’s what would’ve happened to them. They would’ve done it. I stood silent. I could say with a clear conscience and a pure heart, I’ve never ever had to tell anything on anybody.”

Even with the lack of proof and T.I.’s consistent denials, he hasn’t been able to completely shake the snitching accusations. Just a few days ago, he became enraged when a social media commenter brought them up again during an Instagram livestream.

“Fuck you and your life, nigga,” he told the person. “You see a snitch nigga, slap him when you see him. Knock his nose off. So nigga next time I’m out instead of asking for a picture like a little hoe ass nigga, nigga come on knock my muthafucking nose out if you think I’m a snitch nigga. Nigga come on; nigga quit smiling in my face tryna get in my fucking section.”

He continued, “Don’t play with my muthafucking name, nigga. I’m the muthafucking King, nigga, and never gave no muthafucking information to get anybody in no muthafucking trouble nan time with no police nigga. If I am working with police, it’ll be to get him to shoot you nigga. Fuck is you talking about?”

50 providing a signal boost to the old Crime Stoppers video won’t make things any easier, putting T.I. back on the defensive.

However, a lot of Hip Hop fans have shown they don’t care about snitching. Allegations against Gunna quickly fell by the wayside and the controversial Tekashi 6ix9ine has experienced major success despite testifying against Nine Trey Gangsta Blood members in court.

But T.I. is cut from a different cloth. One only needs to refer back to his Trouble Man: Heavy Is The Head cut “Sorry” as an example of his outlook: “Switch the flow up ’cause these niggas be snitching so much/I promise all they missing’s a badge, coffee, and donut/Go to jail, so what? Never see my integrity perish/That ain’t the Harris’ way, study my pedigree.”

Those words show why the allegations offend T.I. so much. Yet by challenging 50 to a battle, he’s provoked someone willing to pour gasoline on the brewing fire.