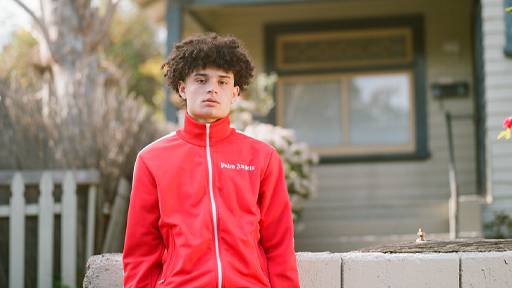 Modesto, CA – There is something to be said for a combination of infectious music and a great story.

The 18-year-old musical firecracker first crept onto the scene in 2017 with the release “Ride With You” — a song recorded over Outkast’s “Ms. Jackson” with his friend Cal. His popularity soared after being involved in a near-fatal car accident that left him on life support for six days — and left two others dead (which he detailed on his breakout “29“).

After signing to Atlantic and making noise throughout this turbulent 2020 with the singles “Costa Rica,” Rich Bitch” and “Brothers” featuring Luh Kel, he finally dropped his debut LP Pain is Temporary on Friday (June 20).

In an era where the music moves at breakneck speed and a flash in the pan viral career can come and go in an instant, it may have been forgivable to have either not caught on to him or rolled your eyes at the fact that he’s a white kid rapping tough. From Modesto. With big, poofy hair like Sideshow Bob. And his name is Bankrol.

However, the potential brimming from his debut (especially if it’s your first impression) is undeniable. From the first song “Divorce,” which details the struggles dealing with his parents splitting up — including physical abuse and living on his own at the age of 16 — he grabs your attention. He doesn’t let go until the LP closes with a remix of his hit-single “Costa Rica” with The Kid LAROI.

It’s difficult not to draw a comparison to another white upstart who spun viral success into what has become a fruitful career, Post Malone. Not merely because of their fair complexion, but rather in their obvious crossover appeal.

Though fans fell in love with Post’s Auto-Tune trap crooning on his breakout single “White Iverson,” it didn’t take long for the versatility in his sound to take a front seat in his creative process.

In 2016, XXL Editor-In-Chief, Vanessa Satten, alleged the reason Post Malone ditched their Freshmen cover was because he wasn’t focused on Hip Hop and was going in more of a rock/pop/country direction.

He denied the claims, adding, “My love of music shouldn’t ever be questioned … I shouldn’t be chastised for expressing myself in whichever way I see fit. That being said, I never have once said that I’m not going to make Hip Hop anymore.”

He has tried to stay true this mantra amid cries of cultural appropriation (following controversial comments he made about the genre’s emotional depth). Though, since 2016, his sound has evolved greatly — from adding acoustic guitar performance to more substantial doses of unfiltered pop.

While Bankrol is undoubtedly Hip Hop, according to all modern definitions, his melodic songwriting on songs like “Brothers” and the acoustic guitar-driven “School Girl” open up his sound to the same lane blazed by Post. As does the drumless piano ballad “Die Right Now.”

He’s clearly from the bottom without entrenching himself in a “street” aesthetic. As well, he possesses songwriting with enough motivational depth to make him the voice of the disenfranchised members of the generation propelling his streaming numbers to impressive heights.

In some ways, those elements (combined with his somewhat malleable look) are the perfect storm for creative growth and crossover freedom. Above all, the kid makes excellent music — and at eighteen, he has a lot of room to grow and be great.

Stream Bankroll Hayden’s LP Pain is Temporary, via Atlantic Records to get a taste for yourself.