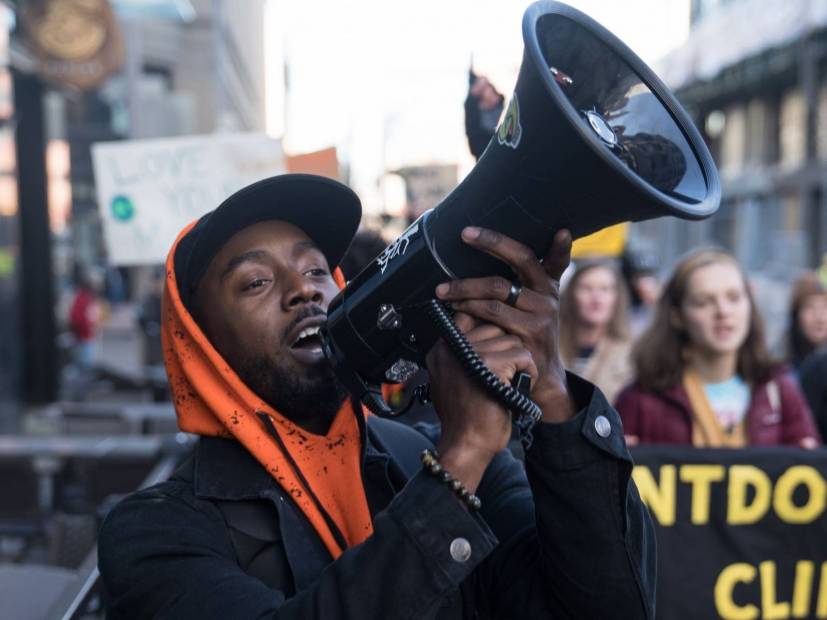 HipHopDX Premiere – DJ Cavem is at the forefront of eco-Hip Hop, a whole sub-genre that addresses sustainability, food justice and climate change through a Hip Hop lens. In his latest video for “1 For The Hood,” which comes from his BIOMIMICZ EP, the Denver-based MC/vegan chef walks the streets of the Colorado city rapping with a megaphone during a protest at the state capital building.

At the time, he never could’ve predicted the video would be unleashed during a pandemic.

“When I first wrote this song about people getting sick and foreign disease, I didn’t know I would release the video during a pandemic,” Cavem tells HipHopDX. “Prophesying to people looking for organic seeds to grow food gives me something to think about when it comes to releasing a music video on the 50th anniversary of Earth Day. Eighty percent of the people in the country dying from coronavirus are African-American, and a lot of that is due to lack of holistic health, fresh food options and sustainable recreation in our communities.

Growing up in Denver’s historic Five Points district, Cavem was raised in the middle of a food desert. Fresh produce was simply harder to obtain. But a landscaping job led him to greener pastures in more ways than one.

“In the ’90s, it was gang-infested in the center of a food desert,” he says. “I looked to the community members who were shedding light. Growing up watching Captain Planet and gardening with my elders was the best thing to keep me out of trouble, real talk.”

Cavem continues, “Practicing a plant-based diet for over 19 years, some of those foundations are what I teach when I conduct my environmental culinary climate action assembly programs using Hip Hop to redefine the image of wealth. Youth need an inter-generational dialogue on the real change to focus on in their community, especially ones affected by food and climate-related illnesses.”

Now, his mission is clear — he consistently fights for food justice while addressing obesity and sugar as joint epidemics in lower-income communities. In 2007, he dropped his first eco-Hip Hop song called “Wheatgrass” with stic.man of dead prez and it’s been on ever since.

Eight years later, Vita and his wife/collaborator Alkemia — who also appears in the “1 For The Hood” visual — were asked by Michelle Obama to perform a culinary concert (a vegan cooking show combined with eco-Hip Hop) at the White House for her “Let’s Move” campaign.

And it’s not surprising — Cavem is full of innovative ideas. For BIOMIMICZ, he dropped the album on a pack of seeds so people could grow food. It was based on an idea from his OG Ron Finley who said, “Growing your food is like printing your own money.”

“Growing food develops cooperative economics,” he explains. “Teaching organic gardening and composting through a song about water conservation is imperative. So, I designed my curriculums and BIOMIMCZ through packets of seeds because I believe in the concept that we can grow our future together. My latest environmental Hip Hop album needed to dedicated to biomimicry. So I formed Plant-Based Records and dropped beet, kale and arugula seeds to distribute the music instead of plastic CDs.

Cavem adds, “We put the QR code on the back to download, making it the first USDA organic compostable and plantable album — just what the ‘hood needs right now. I partnered with a local seed company to make sure it was officially organic.”

“People in my community produced the music. It is a direct influence of the changes taking place in the Hip Hop community and the world. My main focus is to utilize our art for social change and understand as a people what we can do to create the actual change that we want to see.”

Watch the ‘1 For The Hood’ video above and check out the trailer for the upcoming Hungry For Justice doc featuring Cavem, Styles P and dead prez below.