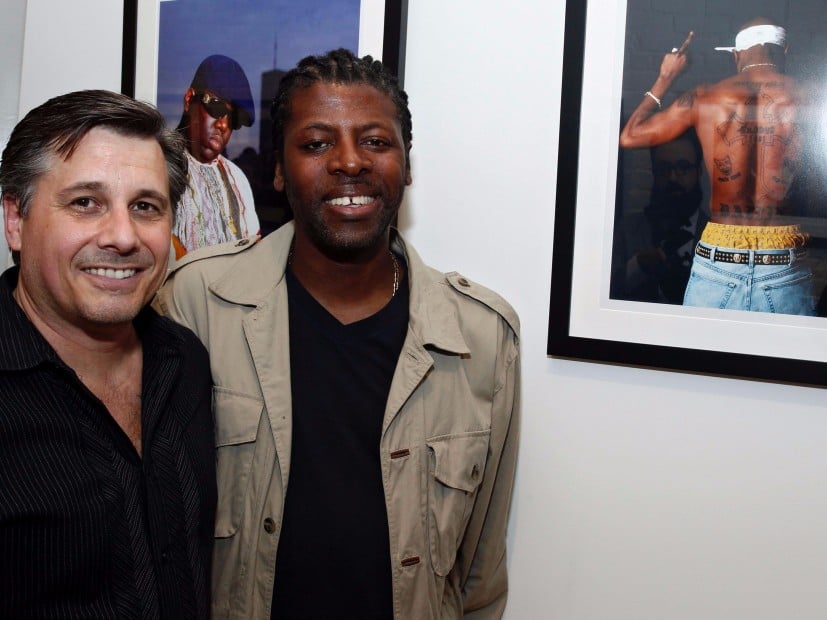 New York, NY – Among the many iconic photos of 1990s Hip Hop legends such as Snoop Dogg, Tupac Shakur and Wu-Tang Clan that you’ve seen, there’s a good chance that Chi Modu snapped those camera shots.

Earlier this week, the New York Post reported the veteran Hip Hop photographer is in a legal dispute with The Notorious B.I.G.’s estate in a copyright lawsuit. The case stems from Modu using his 1996 Biggie Smalls photo for a snowboard deal with Swiss company Yes Snowboards.

The image in question is Biggie wearing one of his multi-colored Coogi sweaters, Versace sunglasses and Kangol flat ivy cap standing along the Hudson River in Jersey City, New Jersey with the Twin Towers looming in the distance.

In 2018, Modu and B.I.G.’s estate couldn’t come to terms as he wanted a “livable wage” of approximately $100,000 per year from the revenue of its lucrative licensing deal.

Modu says he’s been underpaid for several years by the Biggie’s estate for the use of his photography.

The creators and executors of The Notorious B.I.G. LLC are Biggie’s widow and R&B singer Faith Evans and his mother Voletta Wallace.

“I think the number was $100,000 that I say, but the reality is, that’s actually a small percentage of what’s being made,” Modu said. “And it’s not a very big number, but the whole point is, kind of the foundation of this case is the right of publicity has been abused. That’s the bottom line.”

The estate filed a lawsuit against Modu in California and called him a “parasite and to no work of their own” because he was not given permission to use a memorable Biggie photo in his portfolio to sell the Biggie-screened snowboards.

The lawsuit marks the first time the veteran Hip Hop photographer has been sued in a 30-year career.

“Usually the copyright holder sues people for infringement on their copyright,” Modu said. “This is a situation where a subject is trying to sue a copyright holder for using their legally, federally, copyrighted creation. So, it’s completely backwards. And the main reason for the suit, it’s very clear to me. It’s to scare artists and creatives out of their rights.”

Modu filed a countersuit against The Notorious B.I.G. LLC citing defamation and interruption of an existing contract and future contracts.

Modu said that Yes Snowboards has sold less two dozens of their Biggie-screened products and had merely profited between $5,000 to $10,000 at press time.

“When you get a cease and desist, or a letter from an attorney, and it’s a top 100 law firm, most people start to shake in their knees because it’s intimidating. But at some point, when your back is up against the wall, you have nowhere to go but up.

“If someone tries to sue you for less than 20 snowboards in a world of seven billion people, and they take you into federal court, and they chase you all over the globe, and try to chase down the snowboard company in Switzerland to serve them, it’s clearly not about money.”

Biggie’s estate also sued Yes in March 2019 for selling the skateboards without permission of the image and not paying them, according to The Blast.

The impetus for Modu filing multiple lawsuits in this case is not just to pay his bills but to fight for artists’ rights.

“Copyright holder for an individual is death plus 75 years. So, even when I go, the copyright remains with my heirs for 75 years after I’m gone,” Modu said. “The whole point was to prevent an artist from thinking that they could monetize their creative work.

“That’s what has to stop. Because artists aren’t earning a livable wage, as if a visual artist isn’t as important, or more important at times, than a performing artist. We have people that actually behave as if we have nothing to do with how these pictures look. In fact, we are important and we had everything to do with it.”