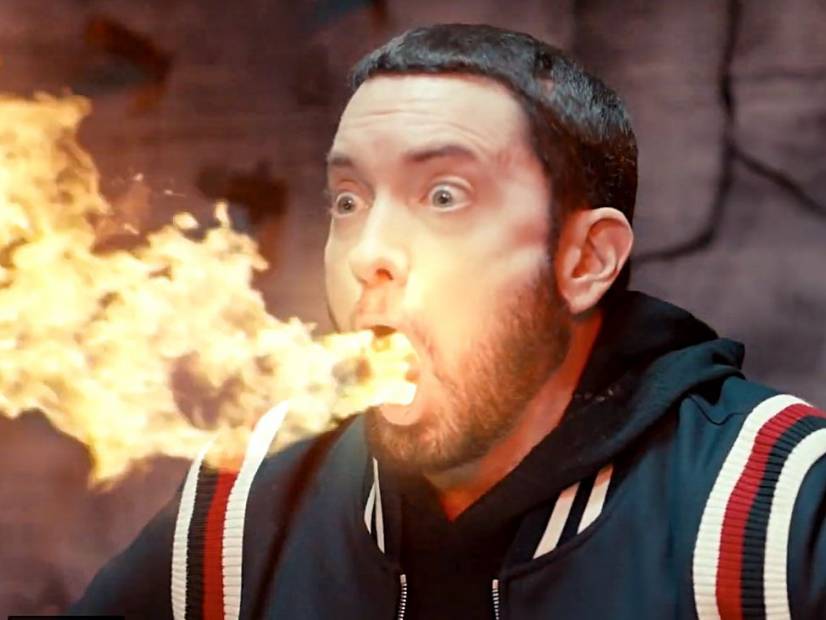 As promised, Eminem has delivered a proper visual for the Music To Be Murdered By track “Godzilla” featuring the late Juice Wrld. Directed by Cole Bennett, the visual begins with Shady drinking some “Godzilla Whiskey” as he raps about how alcohol can turn him into a monster.

Most Em fans know Shady has been sober for nearly 12 years, so it’s easy to come to the conclusion the scene is a metaphor for what addiction can do to a person.

From there, Shady’s face is transposed to other people’s bodies as the real Shady continues to slam all kinds of liquor and stumble all over the place.

Toward the end of the visual, Em gets punched in the face by Mike Tyson who promptly delivers an apology. Nevertheless, he must then go the hospital where Dr. Dre is playing — yep! — a doctor alongside another Eminem clone.

The video includes a heartfelt tribute to Juice Wrld who passed away in December 2019 at the age of 21.

[This article has been updated. The following was published on March 7, 2020.]

Eminem unleashed a lyric video for “Godzilla” earlier this week, but it turns out he has more plans for the standout Music To Be Murdered By track.

On Friday (March 6), Slim Shady announced a proper visual for the track would arrive on Monday (March 9) at 3 p.m. EST and revealed director Cole Bennett was behind the lens.

The post came with a 16-second clip of the video, which shows Shady breathing fire and fighting off various monsters.

“Godzilla” spawned the #GodzillaChallenge on social media last month. Since then, countless aspiring rappers — and some of Em’s peers — have stepped up in an attempt to beat or at least tie the 224 words Shady spits in 31 seconds as part of his verse.

Bone Thugs-n-Harmony MC Bizzy Bone and the inimitable Biz Markie both had different takes on it. Meanwhile, Twista said he’s accepted the challenge but has yet to release a video.