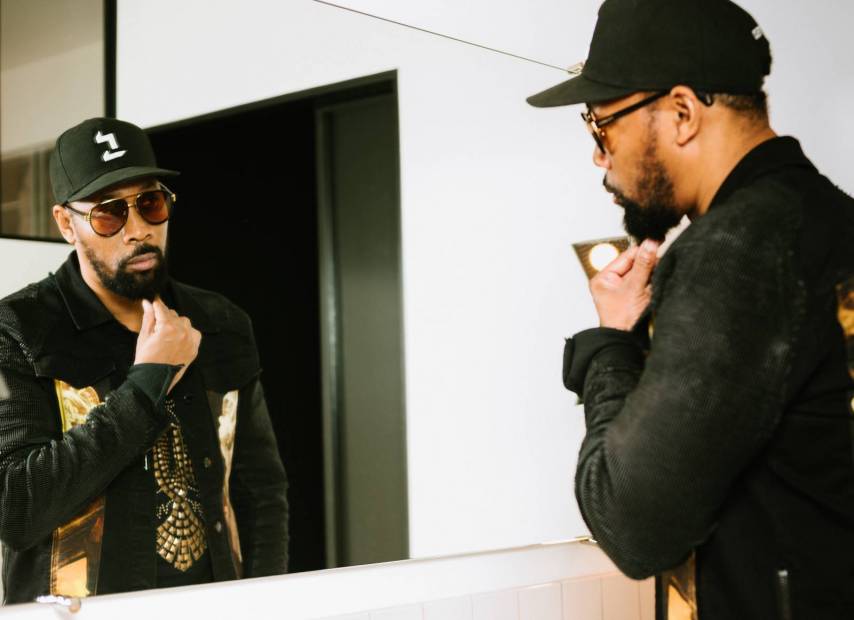 As an elder statesmen and one of Hip Hop’s most heralded sound smiths, RZA has always striven to find his zen in the chaos of a life that involves crafting classic beats, rhyming, starring in and scoring films and even authoring the blueprints to dynasty building.

Mental health continues to be a pervasive discussion, both in the country as a whole and in Hip Hop especially. From the artists we’ve lost at the hands of drug use to music that centers around coping with depression, it’s a topic that has been transitioning from growing concern to a full-blown crisis.

For RZA, the end result is a 30-minute mediation album known as Guided Explorations.

When the Tazo Tea Company reached out and asked the Wu-Tang founder to do a collaboration that would help encourage meditation as well as mental and emotional well being, it was the perfect match at the perfect time.

“The agency had reached out to me a few months earlier with the potential of combining with Tazo, then when they sent me the deck on what it would be, which was Tazo, the zen flavored tea: Meditation, exploration, how to inspire creativity it was like, ‘That’s what I do. So it was a natural fit for me and when things fit naturally I don’t force it I just live it,” RZA told HipHopDX. “This is what I’ve been striving to do anyway, to bring awareness. When I wrote The Wu-Tang Manual, it was only because they promised me that if I did that I could do The Tao of Wu. I wasn’t interested in doing a fan book for business, but if you could help me spread some type of wisdom, then I could work with you. They was like ‘alright, if you do this one first then we’ll do that one, they put it in writing, I did it and I’m super proud of what it means to other people. So the zen that I strove to put into that book and the awareness both resonated and this is part of that same trajectory. The team at Tazo actually referenced some of the books when they reached out to me and it all made sense,” he added.

While most collaborations yield advertisements and social media posts this one involves RZA doing what he does best: music and mentorship. More specifically, RZA released five meditative tracks crafted specifically to help the listener unlock their own creative potential available now on Spotify.

Think about it… Stop looking for happiness in the same place you lost it. #wutang #rza

Additionally, RZA will take 10 artists to “Camp Tazo” in Staten Island to help guide them towards a new level of creativity.

“The ten contestants are gonna get a physical experience. We got two days of camp set up with a whole schedule set up of what they’ll be doing, starting bright and early. We’ll bring them over to Staten Island on a ferry and build from there. We got a couple good people assisting us,” said RZA. “Those ten people will get a chance to be at the camp, but then we’re gonna take the same five explorations and we’re gonna release it in audio form on Spotify so that other people can listen in, pick up some wisdom and knowledge and maybe unlock some creative potentials in their body.”

When it comes to promoting zen on the lyrical side, RZA pointed to two rhymers in particular that he feels would bring the most to the enlightenment driven collaboration.

“I think a lot of lyrical MCs are flourishing right now. An artist who kind of to me is into expressing himself, his consciousness, his manhood in a certain way is J. Cole. I think he’s at a certain age where he’s very comfortable talking about the good, the bad and the ugly of life. I think Kendrick [Lamar] of course, in the sense that he’s also very comfortable talking about the complexities of life,” RZA noted. “Those two are right at that age. I think they’re right around 30. Three is the understanding phase of life. After you get past the understanding phase you come to culture, that’s four, so you’re in your 40s. That’s living now. Everything you’ve now accumulated you should now be able to express, explore, exhibit. All that should be able to come out of you,” he added.

Elsewhere, the Cut Throat City director spoke on another young artist, one he feels has not received proper due for ushering in the sound that dominates Hip Hop radio today.

“I think a lot of dudes are copying Kodak Black. I think Kodak opened up a whole zeitgeist for artists. I think he opened up all kinds of chambers. Travis $cott has taken it to the world stage but there’s something about Kodak, I don’t know what his personal situation is right now, but he’s definitely one of those artists of this generation that’s inspirational but seems not to get his props,” said RZA. “I mean if you think about that Cardi B joint ‘Bodak Yellow,’ that’s just his joint, and it made a star out of her. That’s the power of Kodak. He’s one of those guys.

He has that kind of power he just don’t seem to be getting the chance to get it right.”