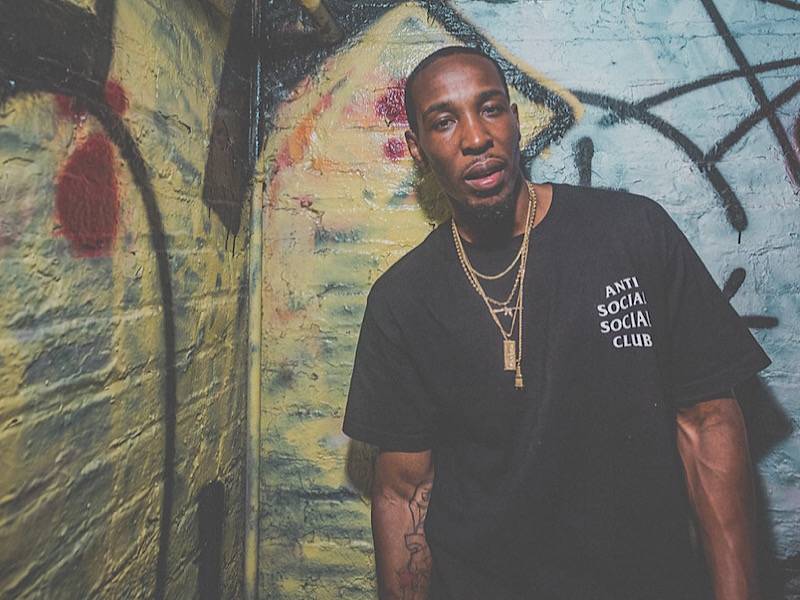 Griselda’s rise brought along with it a renewed interest in a particular branch of Hip Hop that had — for years — been left in the shadows in favor of a more commercially refined sound. While many artists in the vein had already been dabbling in the aesthetic, there seemed to be a new beacon to unfamiliar listeners (and older ones that fell out of love), allowing a new crop of talented acts to be discovered.

New York MC Rome Streetz is one such act. Having been grinding for the better part of this millennium, he gained considerable notoriety following the release of Street Farmacy in 2018 — and has been surfing a wave ever since.

With Joyeria receiving a ton of acclaim from fans and his name popping up everywhere within the scene, 2020 is looking to be his brightest year yet.

Much like the many characters catching serious burn in this new-gen indie era, Rome’s success to date was anything but overnight.

“I used to battle in the lunchroom and shit,” he tells HipHopDX with a laugh. “What really made me start recording music around that time I was that I was getting into a lot of trouble … my mom was trying to get me away from it, so she sent me to London to live with my aunt.”

Though he missed New York, his cousin — recognizing his pen game — introduced him to a friend who had a studio. “I was probably like 15,” he says. “That’s how I started recording music.”

After three years in London building a buzz as the New York kid the rapped, his future was looking bright, with a deal on the table. Unfortunately, things took an unexpected turn.

Rome describes the era much in the same way that others active in the mid-2000s do. Like many of the artists now riding the small waves that Griselda effectively turned into tides, the biggest challenge was essentially getting visibility.

“There weren’t any outlets in New York,” he says. “Everybody just started doing the swag rap shit. I wasn’t really into that man. ”

Even though one of his earliest mixtapes — 2011’s Vegabond — was mostly made up of instrumentals ripped from YouTube, Rome says although he’s evolved, he’s kept the same energy. It’s a sentiment shared by many acts in his lane — notably Che Noir in a 2019 interview with DX.

While they didn’t hop on a bandwagon, the rise of Griselda put a more focused spotlight on their particular sub-genre. As a result, new listeners fiending for artists in the same pocket are making discoveries and (in some cases) finding healthy catalogs to explore.

Though he was on the grind, rocking every mic he could and trying to land blog placements, he notes the major turning point was the discovery that not only was there was a large number of artists just like him, but they were beginning to bubble over.

“I was like, ‘I can do this now,'” he says. “I was inspired to continue to make the type of music that I’ve always been making because I saw it getting traction somewhere else.”

His catalog to date has been incredibly reliable, though any fan would be remiss not to point to his breakthrough Street Farmacy as one of his more shiny bodies of work. While some are clamoring for a sequel, he’s been quick to dispel any rumors.

Though a new project with Farma Beats is slated to drop — it just isn’t the follow-up his fans might expect.

“Trying to make a part two … I’m not even in the same place mentally that I was at when I made part one,” he says. “My life was very uncertain at that particular time. I was going back and forth to court. I was feeling like ‘If I do that jail stint, this is what I’m leaving off. I’m just going to try to spit the craziest shit.’ That’s the mentality I had when I was making that album.”

Looking beyond just the aura of the project, the actual chemistry between Rome and Farma is off the charts — and that’s something fans can expect from their new work.

“It’s not part two, it’s just a new chapter … it’s totally different. My approach is different. What I’m talking about is different. We’re actually in the process of finalizing it.”

Though there has been some chatter amongst the fans looking forward to new music, Rome explains that it isn’t coming in the immediate future, as he’s letting his latest piece of art, Joyeria, have some time to breathe.

“I want to give people time to catch up,” he says. “I feel like I put a lot of work into this album, so I don’t want it to just be on to the next immediately.”

Joyeria, produced entirely by The Artivist, is an LP that he holds in particularly high regard among the projects he’s released. As he notes, its creation process was an entirely new approach for him.

“I always wanted to be able to rap like how I converse,” he says proudly. “So that was something that I ended up doing for this album without actually trying. This album means a lot to me, and it’s funny because it was originally twice as long. It’s like 12 songs, but we made 25.”

That exercise of making more music than necessary then parring it down isn’t his usual style. He doesn’t generally produce as many leftovers.

“I enjoyed this process a lot,” he says. “I feel like I approached all my albums in different ways, but I know the process of making this last album, I’m going to do that once a year. ”

If you could look in side my mind you’ll find.. Art by @wavy_da_ghawd #RomeStreetz #badinfluenyce

The biggest issue weighing on Rome seems to be this very attempt at giving people a chance to properly digest his projects, especially given the feverish pace with which he makes new music.

“A lot of the music that I’m going to release this year is from last year,” he notes. “All the music I made this year is not really going to come out until next year unless I just choose to put it out. But on the other hand, all this new music I got is fucking crazy. Like I actually want people to hear it — but it’s like my album came out four weeks ago. I still got six more videos to give you off of this project.”

It’s a relatable problem for creatives, comparable to a television writer knowing how a series ends two seasons ahead of time.

“It’s to the point where I’m like, ‘Damn, I’m way ahead of that shit now. Like, the way I rap or just how I feel — and how I feel artistically — I’m past that. I want my fans to hear where I’m at now. But, they gotta wait.”

For day one and new fans alike, it’s an exciting revelation; vindication their support will be rewarded with volumes of work in Rome’s stash over the next few years.

“I’m too far ahead of myself,” he says with a laugh. “It’s probably going to be like a year before I catch up, but we’ll see.”

Stream Rome Streetz and The Artivist’s Joyeria below.