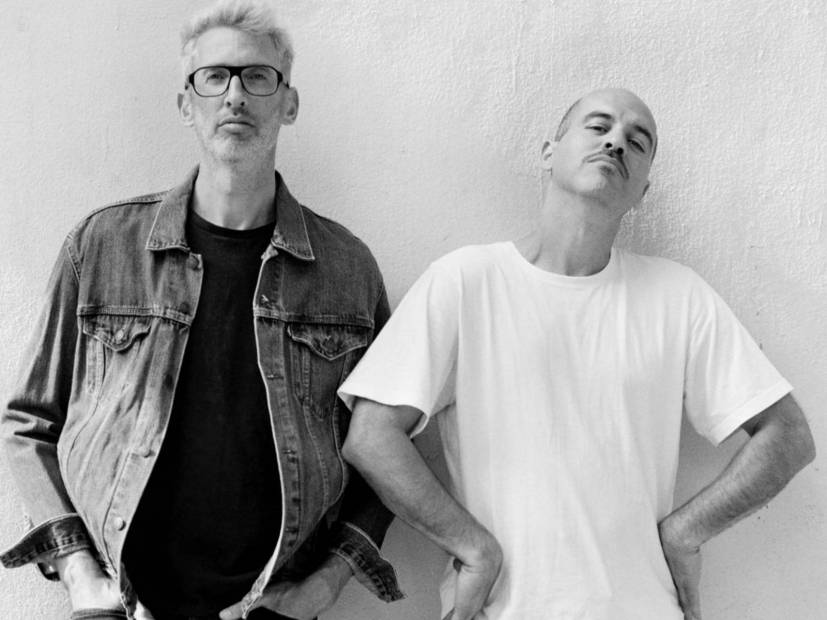 Interview: Stretch & Bobbito Conquered Radio, Now They Have An Album Called 'No Requests'

Stretch Armstrong and Bobbito Garcia are bona fide radio legends — that’s not up for debate. The New York City-bred duo helped launch the careers of numerous notable Hip Hop artists — from Eminem and Biggie to JAY-Z and the late Big L. They ruled the ’90s airwaves like Kool DJ Red Alert ruled the ’80s.

Now, Stretch and Bobbito are embarking on a new chapter with their first album, No Requests, which they both curated and executive produced for Grammy Award winner Eddie Palmieri’s new label Uprising Music. It was an idea Stretch birthed while promoting the 2015 documentary Stretch and Bobbito: Radio That Changed Lives.

“When Bob and I were traveling the world, we hit up over 60 cities supporting our film, Stretch and Bobbito: Radio that Changed Lives,” Stretch tells HipHopDX. “While we were doing that, I put out there, ‘Bob. Yo, wouldn’t it be amazing, if when we’re traveling to all these incredible places and interacting with all these amazing people in music, we were able to record a record with these people and document it and have a really incredible international project?’ Of course that didn’t happen because we didn’t have enough time while we were traveling.”

While Bobbito was working on his next documentary Rock Rubber 45s, he reached out to Palmieri for a collaboration, the first song Bobbito had ever produced. After all, they’d already collaborated in 2012 on the score for Bobbito’s first documentary Doin’ it In The Park. At one point, Palmieri mentioned he and Uprising Music would be happy to produce an entire album if the opportunity ever presented itself.

“Once Bob was done doing everything he had to do for Rock Rubber 45s, we had two seasons of our podcast [What’s Good with Stretch and Bobbito] at NPR, which took a lot of bandwidth,” Stretch continues. “Once all of that kind of died down, we were able to revisit this idea, which up to that point had just been kind of this fantastical idea. We decided to turn it into reality and because of the offer that Uprising NYC, via Eddie Palmieri, had made to Bob. Bob was like, ‘Yo! I want to do this with Stretch. Let’s get busy!'”

Bobbito adds, “The label had Eddie Palmieri, a 10x-Grammy Award winner, National Endowment of the Arts, jazz master, Latin music legend. He doesn’t know about me and Stretch’s radio show, but the label did. When he was at Yale, his mom used to tape the show and mail it up to him at school. So when I told him, I was like, ‘Yo, I’ll do your album with Stretch. Would you still be into it?’ He was like, ‘Oh my! Bingo sauce!'”

With that, No Requests became a reality. Enlisting the help of several world class musicians, Stretch and Bobbito put together The M19s Band, which is named after the M19 bus they used to ride as kids, a main artery of sorts connecting their two worlds.

“Bob grew up on the Upper West Side of 97 Street and I grew up on the Upper East Side of East 96th Street, and the M19 was the name of the bus that linked those two neighborhoods together, via 96th street through Central Park,” Stretch recalled. “Metaphorically, the M19, like our album, is our desire to have it build bridges and bring people together, just like that bus did.”

We up in NPR doing All Things Considered to talk about our album NO REQUESTS which drops January 17th. Hot sauce! Link in bio.

And it does. On “Anna From Woohside (Beat Suite),” the M19s Band fuses together the instrumental versions of Nas’ “N.Y. State of Mind,” Biggie ‘s “Unbelievable,” Crooklyn Dodgers’ “Return of the Crooklyn Dodgers,” O.C.’s “Time’s Up” and Souls of Mischief’s “93 ‘Til Infinity” and puts their own spin on it, sprinkling jazz, Go Go and Latin into the mix.

“We’re down to challenge our dance floor, the same way that we do that as DJs when we spin. We’re not playing Top 40, current rap and R&B records from commercial radio. That would be too easy. Of course people want to dance, but they hear it all day. So what we do as DJs is what we did as musical producers with this album.”

Stretch and Bobbito have plans to take the show on the road, although logistics could be complicated. When asked how many people make up The M19 Band, Bobbito replies, “That’s a good question. We don’t really know. It depends on the show,” to which Stretch says, “It depends on the budget. It can be from three to 10 people.”

On Friday (January 17), the day No Requests drops, they have a show at The Kennedy Center before opening up at the legendary Gramercy Theatre for their debut hometown show on January 23. From there, they hope to take the show overseas to Paris and London.

“We’re also available to DJ after every time the band plays,” Stretch adds. “When its available, we’re enthusiastically trying to do that.”

Bobbito chimes in, “Yeah, to give people the 360 experience.”

"THE MEXICAN" • This @stretchandbobbito + @them19sband "The Mexican" music video (directed by @koolboblove) featuring Latin Grammy winner @yeyasmiles supports immigration rights. Take action now! Visit @raicestexas at RaicesTexas.org The original lyrics from the original “Mexican” by British rock band Babe Ruth were written in reaction to the historical inaccuracies in the motion picture starring John Wayne about the Alamo and the Mexican American War… So since the song has such a deep history for both Mexicans as well as the original hip-hop community, we’ve changed some of the lyrics so that they address what's currently going on at the US’s southern border. We invited Mireya Ramos, who is Mexican Dominican and raised in PR, to sing and play violin. Our former roommate @nickquested shared footage of asylum seekers from his upcoming documentary "So Far From God." Bobbito reached out to his international network of b-girls and b-boys @papo_bushwickrock774 @ynotism @ariantontowi @bgirlbonita @oriana_feenx @jazzyjes @ezmikersc to rock. We added an Afro Boricua plena break to our version so @nmgonzalez.perc @sirenadelamar7 @leanazen rep the century old island dance as well! Credits: Director: @koolboblove editor/DP: @jonlopez13 LA shoot DP: @justonefilm Our digital album NO REQUESTS drops 1/17 on @uprisingmusicnyc @bklynroad @ada_music @warnermusic with vinyl/cassette by @fatbeats and CD/merch by @ropeadope. #stretchandbobbito #them19sband

In terms of the title, No Requests serves as a reminder to their listeners. Anyone familiar with DJ culture knows asking them to play a particular song can get irritating to say  the least.

“I think the types of venues I have DJ-ed at over the years varied greatly, probably more than the types of venues that Bob has played in,” Stretch says. “Bob’s been fortunate enough to get booked in places that tend to be more music-centric, attracting a crowd that is serious about music, about culture, that is not really concerned with the popular music of the day.

“I’ve done everything from the most underground music centric to the most horrible Las Vegas mainstream with a line of hostile white women asking for bad music. No Requests is kind of tongue-in-cheek. It’s not meant to be too serious, although we actually don’t take requests. With regards to the album, you don’t need to make requests because we got you.”

Boogie and the Barber. Or, Stretch and Bobbito as we’re more widely known. 📷: @janettephoto 🖤

While Bobbito primarily agrees, he points out No Requests is also a statement. Throughout the course of their careers, they’ve perfected their ’90s Hip Hop playlists, but now it’s time for something different.

“If you receive the notice that Stretch and Bob produced an album, you’re probably going to think, ‘Oh my God, they probably got Nas, Rakim and Black Moon, and they probably got Pete Rock,'” Bobbito says. “So, it’s kind of a subtle statement. We are doing us. This is the music that we love, that we are passionate about, that we want to share with you. We’re not doing what our audience would want or expect us to do.

“I can’t tell you how many times I get booked as a DJ, and I say what is the desired music you like, and they say, ‘Oh, we want you to play 90s Hip Hop.’ No. I already did that. We did that very well. So, the album title is a bunch of tongue-in-cheek inside jokes for all the DJs as it is a sort of a subliminal message to our audience. This is us in 2020. Accept us.”

One of the lead singles on the album is a cover of Stevie Wonder’s 1971 classic “If You Really Love Me.” It was an important song for Bobbito considering the music icon is one of the biggest influences in his life.

At the beginning of the track, Stretch’s voice comes on and it quickly becomes clear it’s an old interview with Stevie. He asks Stevie if he’s ever heard a cover of his music he didn’t like to which Stevie says, “Never.”

Stretch and Bobbito are still waiting on the official word from Stevie, but it sounds like things are in their favor.

“We reached out to his lawyers to share the record, but we haven’t heard back,” Bobbito explains. “In the best case scenario, we hope that he loves the record and perhaps will come perform it with us at some point live. Or maybe he says, ‘Wow, I love your production style. Let’s do a song together on my next album.’ I’m a big thinker.

“I believe in putting stuff in the universe, in a positive manner, and then it happening. We’ll see. Of course, I love Stevie Wonder. When Stretch and I sat down to figure out what songs we wanted for this album, Stevie Wonder was a shoo-in to be a part of this album, if I had anything to do with it.”

As previously noted, No Requests arrives on Friday (January 17). Find the album here.