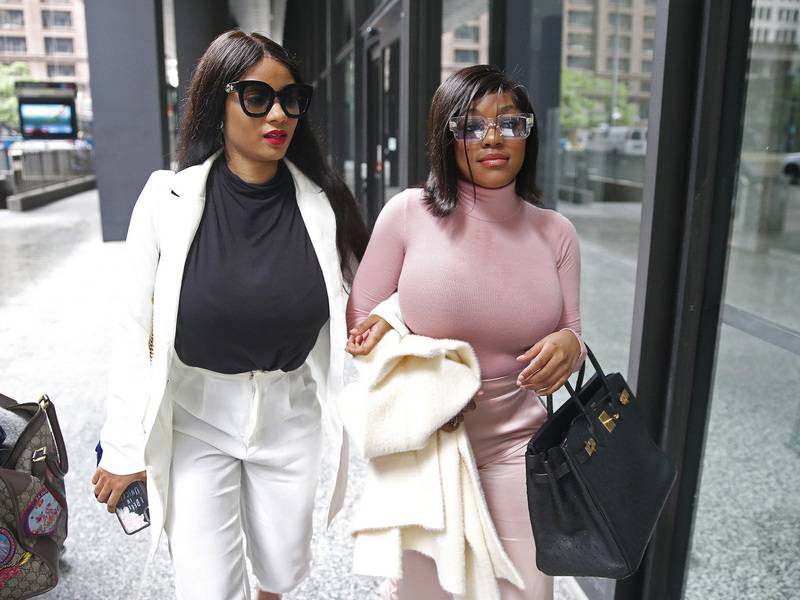 Chicago, IL – R. Kelly’s girlfriends — or sex slaves as past allegations have described them — got into a heated confrontation on the disgraced singer’s birthday. Police were called to Kelly’s Trump Tower condo in Chicago after an argument between Azriel Clary and Joycelyn Savage turned into a brawl on Wednesday (January 8).

Clary documented the incident in an Instagram livestream, which briefly showed her showdown with Savage before the phone was knocked out of her hand. Off-camera, an unidentified man and woman can be heard trying to break up the clash between the two.

After the fight, Clary continued to livestream while cops questioned her about what happened. According to her, Savage gave a woman named Kimberly the keys to their condo in an effort to retrieve awards and other belongings. Clary claims Kimberly is some type of handler for Kelly, who is currently in jail.

#PressPlay: Part 1—While #RKelly is celebrating his birthday in jail, his girlfriends #JoycelynSavage and #AzrielClary were back at the crib putting the paws on each other 👀

Clary demanded Savage be present for the removal of these items, which eventually led to the argument between the two. Once Savage was in the condo, the bickering began and led to a bombshell accusation.

“I told her, Joycelyn, you’re going to jail,” Clary explained. “You slept with a minor and that minor was me. You did it multiple times, over and over again.”

She said Savage then attacked her as seen in the clip above. Clary told police she intended to press charges and planned to leave the condo in the next day or two.

Clary’s underage sex claim is another potentially damning revelation about Kelly, who is already facing sex crime charges involving minors. His attorney Steve Greenberg downplayed the latest accusation in a statement to TMZ while dismissing the incident between Clary and Savage as a publicity stunt.

“I have a statement written by Azriel that she provided to me, voluntarily, after Robert was already in jail that said she never had sex with him when she was underaged,” Greenberg told TMZ. “As far as this little catfight, it is clear that it was staged to try and boost social media popularity.”

Kelly’s federal trial for charges of sexual abuse, child pornography and obstruction of justice is scheduled to begin in Chicago in April.

A trial for charges he’s facing in New York will take place in May while another back in Illinois is set for September.