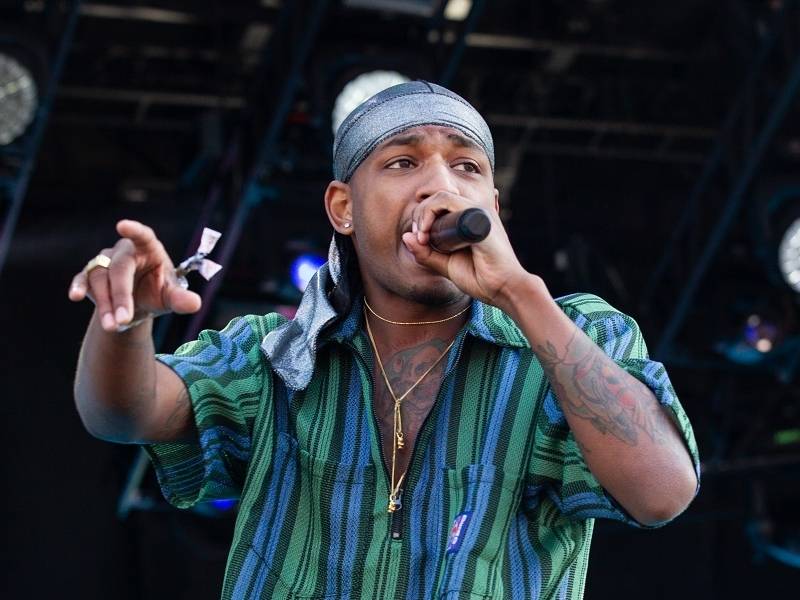 Guapdad 4000 has issued a challenge to Russ. After the two got into a scuffle at the 2019 Mala Luna Music Festival in San Antonio on Saturday (October 26), Guapdad says he wants to fight Russ to settle their issues.

The beef between the rappers originated from a song on Guapdad’s new album Dior Deposits. On the 6LACK-assisted “Prada Process,” the Oakland native raps, “You doing right but we don’t care, we call that doing Russ.”

The line didn’t sit well with Russ, who punched Guapdad when they crossed paths at the Mala Luna Music Festival. Video of the incident surfaced online, as seen below.

Video of the altercation between #russ and #guapdad4000 leaks ?

Guapdad reacted to their clash via Instagram, sharing his side of the story in a video post.

“You thought it was cool to ask me to talk to me about a song that you didn’t like that’s on my album Dior Deposits,” he explained. “You said, ‘Hey let’s talk about this song.’ I said, ‘Cool, I’m on the phone with my brother.’ I turned around and you snaked me then ran in your trailer and had your security try to beat me up. Your security couldn’t get me, so your partners tried to chase me and then they got beat up by the fence.”

He continued, “So this what I’m gonna say — either you circle back and try to fight me on camera, but if you were so bold to do this in front of everybody in random San Antonio, Texas, you could. You a man of ego and you do so well, right? ‘Cause the thing about it is, between me and you, even if I lost the one-on-one fight, which when I looked at you and asked you to fight one-on-one, you said, ‘Get off my Dior dick.’ And then I looked at you and said, ‘That’s weird. You talking like me. That’s weird. Why you doing that and you not trying to fight me one-on-one?’

“You got random buff African niggas trying to fight me. Your security really hurt my leg and I ain’t gon’ lie, when you snaked me, that hurt me. I’m not a nigga that deny hits. I’m not a nigga who deny fights. When it comes to snakes, you snaked me. You got me. But when it comes to hands, you know you don’t wanna see me because your partners didn’t even wanna see me and I’m the skinniest nigga in San Antonio, Texas, Russ.”

Guapdad concluded his story by challenging Russ to a fair fight.

“If you wanna do that, let’s do that,” he stated. “If you don’t wanna do that, then don’t ever talk to me again Russ. Because when I see you, it might be a different thing.”

Ask your friends face, let’s record it and do something with the footage?

“Aye @russdiemon why i had to run from your security who will obviously beat my ass but when i look at you face to face and ask to fight one on one you hide in your trailer,” he wrote. “I’m glad i got to call you weird to your face . We could have just ran the fade but you tried to jump me.”

Aye @russdiemon why i had to run from your security who will obviously beat my ass but when i look at you face to face and ask to fight one on one you hide in your trailer. I’m glad i got to call you weird to your face . We could have just ran the fade but you tried to jump me ?

Russ responded to Guapdad’s version of what happened by commenting on his foe’s Instagram video, denying the West Coast rapper’s claims.

“1. you mention somebody’s name in a song in a negative light and they walk up on you and punch you in your mouth, that’s not getting snuck,” he asserted. “you should know what time it is. 2. You said I hit you and ran into my trailer. Wrong. I ran after you.”

Russ claimed Guapad “ran out of the festival” before detailing his final thoughts on the matter.

“You said you fight, but someone who you dissed walked up to you and you did nothing but smirk and get jawed,” he wrote. “You ran and your friends stayed behind and went harder for you than you did lmao. Ain’t nothin in your video is the truth. You’re a clown. Never mention my name again.”

Guapdad fired back at Russ on Sunday (October 27).

“I told no lies,” he claimed. “They just cut the video . Everything else is right there . Niggas jumped me regardless.”

I told no lies . They just cut the video . Everything else is right there . Niggas jumped me regardless