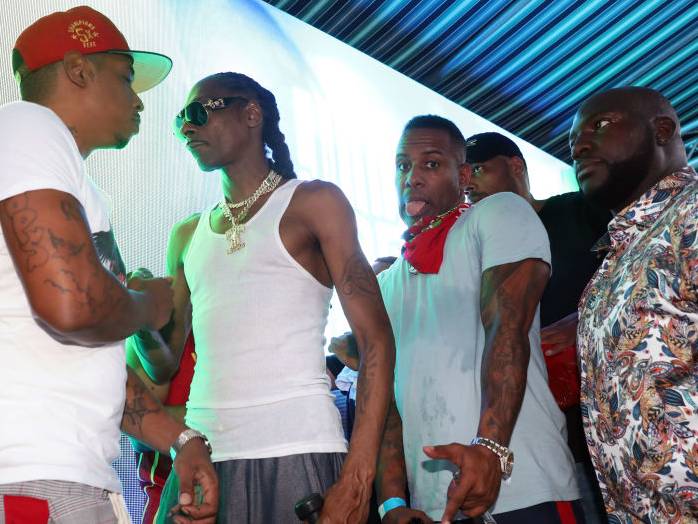 New York, NY – DJ Whoo Kid and his grandeur stories of Hip Hop moments and beyond are pretty much synonymous at this point.

That’s because he has entirely too many of them.

“It’s more than Hip Hop in my world, because it’s too much going on,” Whoo Kid tells HipHopDX.

“Like sometimes I can’t even think. And I’ve been like that for almost 25-years — like straight hiding from artists, hanging with fucking terrorists, DJing for Gaddafi, chilling with Prince Albert.”

Joan Rivers getting on me about my polo shirt. She Called me a human picnic table. RIP. #Classic 🇭🇹

The 43-year-old Haitian American producer and DJ has previously shared immensely harrowing anecdotes in the past, like when he told the tale of Eminem shooting a gun in a Japanese hotel room, or when he recalled being held up at gunpoint by Big Pun.

In an interview with the interviewer, Whoo Kid further delves into the archives of his mind to dish out an assortment of head-scratching personal accounts with DX. During the 40 + minute phone conversation, he touches on a sliver of the remarkable moments throughout his unbelievable life name-dropping, Howard Stern, Kanye West, deceased dictator Gaddafi, all in the process.

“I’m like a human Hip Hop evolution, I was literally around when there was no Hip Hop,” says Whoo Kid.

“Breakdancing, Graffiti, I was running away from cops — I went through all those stages. And even now, with Gangsta Rap, the African movement, the conscious movement, the college movement, you know. I went through every era, and I’m still here. Now all the young kids, they call me the “nigga Mike Dean,” they all want to hang with me now.”

Through the use of these roundabout stories, the Shade 45 DJ explains how they helped him “upgrade” his grind and remain a prominent figure in Hip Hop since its inception.

“Hip Hop is the only genre that allows you to upgrade yourself through catalyzing events,” Whoo Kid elaborates on his come up.

“ I used to mow my lawn in front of my house on 111th (Queens). To the right was Tall Stretch, and Tall Stretch was apart of Live Squad, so he had Tupac, Nas, Biggie, everybody used to go to get beats there. But I was a nobody, but at the same time, 50 Cent was a drug dealer and he was coming on the block beating drug dealers that owed him money. Four more blocks to the right is RUN-DMC; Russell Simmons is at the park doing heroin — it’s like so much Hip Hop interaction that you never think that one day, I’m going to be in front of 30,000 people with 50 Cent.”

The disc jock born Yves Mondesire began releasing mixtapes in 1995 as DJ Whoo Kid and has since has been instrumental in the careers of prominent artists like 50 Cent, Eminem, Capone-N-Noreaga, Cassidy, and Rah Digga.

He’s also credited with being one of the pioneering DJs in mixtape culture and it is estimated he has released more than 60 plus original mixtapes and either hosted or produced on countless others.

“There is no bright side of shit that I’ve done,” Whoo Kid remarks on his process in developing mixtape culture.

“But the only thing that’s bugged out is that I used to make mixtapes in the basement and then I’m hanging with Nelson Mandela. Like that kinda woke me up, like get the fuck outta here, I’m here with some guy you read in the fucking encyclopedias and shit.”

At one point in the conversation, he remarked on having numerous prominent figures like LeBron James and more hosting his mixtapes.

“That was the only way I could get at DJ Clue, who was my arch enemy back then, so I had to get celebrities to host tapes,” he recalls his approach to releasing tapes.

Gradually, Whoo Kid switched gears to explain how he expanded his grind into original video content and artist interviews. In the early 2000’s he created a DVD video series called Rewind that featured candid interviews with rappers followed by an exclusive freestyle.

“I wanted to bring a mixtape feel to video,” he began.

Whoo Kid also shared that he recently uncovered some archived footage intended for the Rewind DVD series that featured none other than a young and newly Rocafella minted Kanye West in what was quite possibly his defining moment in Hip Hop.

“You might as well blame me for Kanye West, he quipped with a laugh. “If I didn’t cuss his ass out, he wouldn’t have crashed his car,” he joked concerning the situation.

“I didn’t really know Kanye like that, but I went in there and kinda spazzed out on him and he got mad, so when he went outside to have Ludacris pick one of his beats, Ludacris picked a Spyda beat instead of his, so he got even more furious. But, at that time Kanye West was like, you know he was hungry,” he recalled.

“And then literally right after, I filmed him in the car freestyling, because he was exhausted and angry — seen him speed off and literally three hours later, I’m in the studio with Beanie Siegel and 3H, which was my A&R at that time, and we got the phone call that Kanye West just flipped his car and was in the hospital. I was like, oh shit!!!”

Kanye went on to infamously record “Through The Wire” during his recovery from the car crash and Whoo Kid insists the moment was almost as big for mixtapes as it was for Kanye at the time because the release essentially functioned as, “the blueprint to mixtapes.”

“So that was his catalytic moment right there that brought him into Hip Hop,” Whoo Kid adds.

“You know, people respected his lyrics, he never gave up — people love stories like that, it’s just like 50 Cent. He got shot the fuck up, came back and now you know, Get Rich Or Die Tryin’, it was like that was a real story. And I always tell these stories, but then somehow people are always finding old video or photos.”

And just as Whoo Kid speaks of those catalyzing, existence upgrading moments, he’s had a few himself that he spoke on, also, with the time he did the Howard Stern show being the hot button topic of that portion of the conversation.

“When I got on Howard Stern, I’ve been interviewing, like I did Hot 97 for seven years, and I been on Shade 45 for like, I think it was like my seventh or eighth year at that time — and he was just like, ‘Yo why just interview every loser fucking Hollywood star that we reject’,” Whoo Kid spoke of the career-changing advice Stern gave him.

“So I was like, what? And he said, “Yeah, like practice — just bring in any actor that’s from the 70s and up, just let them come hang with you.”

When I played Drake during the mix ➡️ @thomaspatricklennon made it a bit weird. 🤦🏽‍♂️ #WhooArmy @hiatustequila got us lit #Reno911 👮🏻‍♂️

“So then I’m like alright — I had Roseanne Barr, Robert De Niro, and you know, not to mention every C/D-list actor to come through. So, the thing that was great about that, like years later all those C/D-list actors became major actors, so they come back. You know, it came to a point where I interviewed like almost 60 percent of The Avengers, I interviewed Twilight — like most Urban and Hip Hop shows in my department wouldn’t know how to interview the whole Twilight cast or you know, The Walking Dead.”

By this point, with more than 10 years on the airwaves, DJ Whoo Kid’s Whoolywood Shuffle show on Shade 45 has become a breeding ground for mentally stimulating exchanges between the DJ and some of the most decorated stars in the entertainment industry.

“And all these stars, I interviewed them when they were like nobody and they had horrible movies — but the thing about it, the trick was, one publicist represents at least 1 or 15 actors, you know what I’m saying. And so as a favor, if I interview your loser actor, and it went well and the promo went well, then if Bruce Willis comes in and that same publicist represents Bruce Willis, they’re going to be like, ‘You know what, Whoo kid was cool, imma give Whoo Kid like 10-minutes with Bruce Willis.’ And that 10-minutes is gold in any Hip Hop format,” he explains.

In sort of an extreme feat of both duality and adaptivity, Whoo Kid’s approach to interviews and content creation has centered him at the forefront of most popular artforms within music, tv, fashion and film.

“I’m just letting it mutate the way everything is mutating around me. So if the transition is now a 16-year-old has the number one record in the country, I have to assimilate to that,” Whoo Kid dictates.

“Like I’ve had Rolling Stone, Complex, all these big outlets repost my old interviews because now they are timeless interviews and the actors or stars or rappers have upgraded to the highest degree, where they look back at what I’ve said — even in Tekashi shit, everybody is looking at the original interview where he stated he was going to do all the bullshit.”

However, of the many interesting, peculiar and off-kilter things Whoo Kid detailed throughout the conversation, it seemed the one topic that elicited the most excitement from him was when things pivoted toward how everything he’s done this far has affected tenure as a famed celebrity DJ.

“Now I’m DJ’ing movie premieres — so many doors opened up, where you know, Thor (Chris Hemsworth) is my homeboy. I’m eating dinner with like, the star of fucking The Walking Dead, I’m on set with Al Pacino, and now all the kids of these actors beg me to DJ their parties, ” Whoo Kid speaks on the progression of his relationships as a DJ.

“And I’m like old as fuck, I’m like grandpa, but everybody wants to hang with me, everybody still wants me to DJ,” he continued. “I have a residency at Hakkasan — like shut the fuck up. Who the fuck at my age could have a residency at Hakkasan? I got a residency in London, Miami, Toronto, I still DJ — and a lot of these DJ’s out here, I don’t give a fuck who you are, you wish you could do that shit. In my experience in touring with Eminem, being with 50 Cent and countless artists, I DJ’d every shitty-ass club in America, Canada, Mexico — and now all over the world.”

“Now, you know, you upgrade to like, reading people now. Because I’ve DJ’d in like Kazakhstan, in China, where they don’t speak any English, and if you can’t read a crowd, and from all of my experiences that I have absorbed from me being who I am, I would not be getting rehired.”

When taking a moment to look back at it all, DJ Whoo Kid offers one main reason he’s stood the test of time, simply proclaiming, “The only reason I’m successful is because I’m not afraid to learn, or fucking get tips and see some special people help me upgrade.”