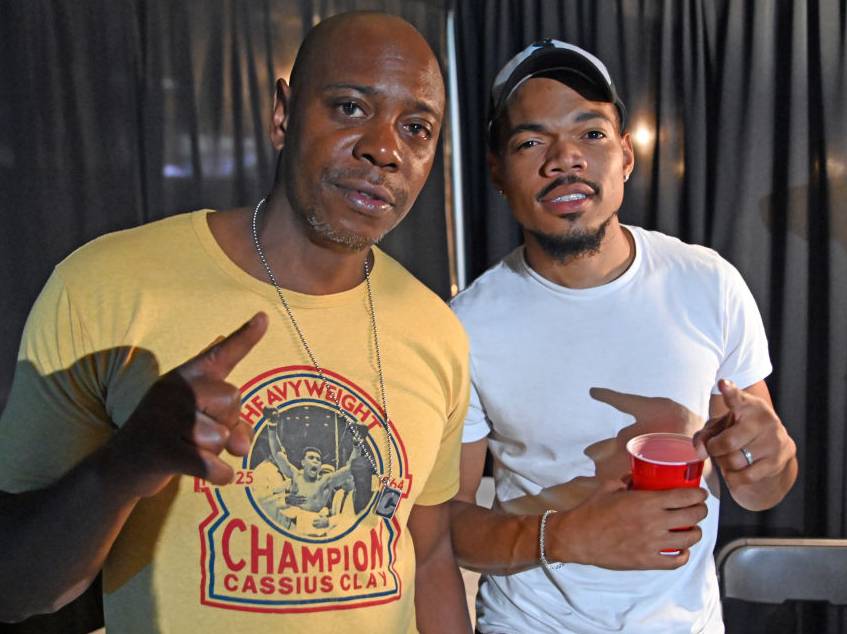 Chappelle, who resides in the neighboring Ohio town, Yellow Springs, held the concert to remember the nine victims who were shot in Dayton’s Oregon District on August 4.

Taylor busted out choreography and sang a medley of hits, joined on stage by her daughter, Junie. She choked up during her set while a slideshow of the victims played.

Chance took the stage shortly after, playing old favorites and cuts from The Big Day, like “Hot Shower.”

“I appreciate ya’ll so much for showing up as a city, for representing love, to represent healing and to represent community… I pray that we get some type of protection from this and grow from it,” he said to the crowd, also revealing that his and his wife Kristen Corley’s daughter is due on Thursday (August 29).

Fellow comedian Jon Stewart took the stage to lead the crowd in “Happy Birthday” for Chappelle, who turned 46 on Saturday (August 24).

“Dayton, Ohio, you have reclaimed this area with love, with hope and with resilience,” Stewart said.

Chappelle also enjoyed a “Happy Birthday” from the legendary Stevie Wonder, who appeared as the event headliner and sang hits like “Higher Ground” and “Superstition.”

Stevie Wonder was the night’s headliner. He played all the hits, including Superstition! #GemCityShine @StevieWonder pic.twitter.com/bYQaOHgtDV

“We mourn our dead but tonight we honor them by going on better than we were before,” Chappelle said while on stage with Stevie.

“This is how we really will honor them, by making sure that we change the gun laws of this nation,” Stevie replied.

“This is how we really will honor them, by making sure we change the gun laws in this nation,” #StevieWonder and #DaveChappelle talk #GunControl at #gemcityshine pic.twitter.com/Glan4wxPaU

Chappelle closed out the event by singing “You’ve Got A Friend In Me” and reminding the crowd to be kind to each other.

“With all the other mass shootings, nothing has been done like this, so this is a really cool experience,” Dayton resident Kayla Keen said of the free event.

“It was awesome and heartening,” Dayton native and Stevie Wonder fan Sandy Melke said. “To see the community come together was stupendous.”

Donations were accepted throughout the event, and can still be made online, toward the victims and families through the Dayton Oregon District Tragedy Fund.

Check out more photos down below.