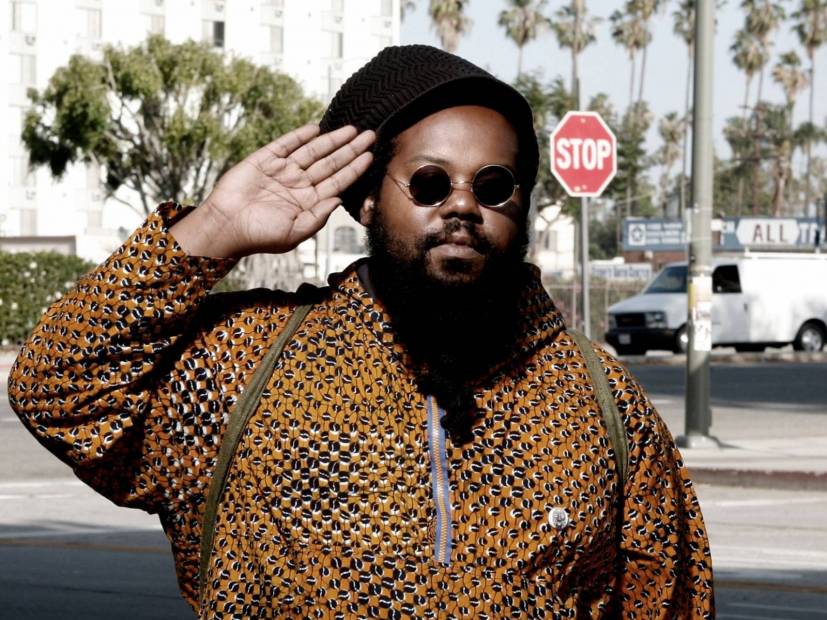 Los Angeles, CA – Veteran Los Angeles DJ/producer Ras G has passed away at the age of 39, according to several friends and affiliates. Social media posts started popping up revealing the news on Monday (July 29).

In an Instagram post from live screen printing company Hit + Run, the caption describes Ras as a “pillar” of Hip Hop culture.

“Safe travels to the next plane(t) G, thank you for always being so gracious,” the caption read. “Ras G, a truly original artist, pillar of culture, innovator, diplomat, wise man and legend of Los Angeles arts.”

Ras has released multiple albums with Brainfeeder (founded by fellow L.A. native Flying Lotus), including 2013’s Back On The Planet. Last month, he dropped Down 2 Earth, Volume 4 with the Ghetto Sci-Fi imprint.

While no cause of death has been reported, Ras experienced serious health issues last December, which he talked about in an Instagram post.

“On Dec 17 i called a ambulance because i was having shortness of breath(wasn’t the blunts relax),” he explained in the caption. “on arrival to the culver city hospital i was diagnosed with pneumonia, borderline high blood pressure, diabetes, hypothyroid ,and heart failure all WTF?!? To i-self was feeling off but not fully knowing(take yo ass to the doctor to see whuts whut).”

Just to let ones know!(fuck rumors and hearsay) On Dec 17 i called a ambulance because i was having shortness of breath(wasn’t the blunts relax) on arrival to the culver city hospital i was diagnosed with pneumonia,borderline high blood pressure,diabetes,hypothyroid,and heart failure all WTF?!? To i-self was feeling off but not fully knowing(take yo ass to the doctor to see whuts whut) Everything is level today 12-28-18 breathing and feeling better than ever Going home same Ole G just gotta eat on a normal schedule( no more all day no eating until the night then overeating and crashing hard)tighten up the plant based LifeIT(we don’t do diets son!) get on these special herbs like a true MF villain to the western medical wrld. And be a better version of i-self than i have been in the past year or 2 Big love to my family and friends who held me up when the hospital vibes and terrible food held me down i haven’t been responding to messages emails etc been trying to get my health back up But “I got time now!” Gonna be At Spacebase recovering all studio sessions will resume Jan over and out 👽👊🏿✌🏿✊🏿 #spacebase #ghettoscifimusic #healthiswealth #atribecalledlifeIt #gtoxera

“I always feel comfortable around those certain folks who speak deep space yet are grounded on earth,” the Jurassic 5 turntablist said. “Ras G was that dude. An amazing artist and soul. I will miss our brief yet impactful conversations.”

Social media exploded with reactions to Ras’ passing. Check some of them out below.

Ras_G has left the planet, far beyond the galaxy.
Show us the way to the cosmos my friend.
I will love you forever.
Thank you for your time on earth.

Today we lost a legend, a musician, a sage, a scholar, a king,…but most of all, we lost a brother. Rest In Peace to the one & only @Ras_G. Thank you for blessing us. Keep smashing those Beats throughout the cosmos. We love you Ras. “OooohhhRasssss!” pic.twitter.com/zCEcQw1ENO

Rest In Peace to Ras G 😔

Damn RIP Ras G. Your energy will be missed.

× GUTTED. RIP @Ras_G True Legend. Thank You For Everything You Shared Here On Da Planet. Keep Guiding Us From The Cosmos.💔 #AfrikanSpaceProgram For Life. × pic.twitter.com/eRLg1DBVo9

We lost an LA legend. Ras G was the beat scene’s answer to Sun Ra. His music was an attempt to commune with the constellations, the Afrocentric direct from Alpha Centauri. I can’t count the number of times I saw him melt minds and speakers. RIP pic.twitter.com/m16RGnKztt

Shit super fucked. Was just chillin with you few months ago and you gave me some real gems, genuine ass nigga. Truly glad to have met you. Music fucking inspiring. Rest easy up there in the Spacebase gz. @Ras_G pic.twitter.com/GHbFTvOGZi

"I’m trying to move you. It’s the heartbeat. The bass is the movement—that’s your life. It’s the life sound. I’m bringing life to music" — @Ras_G, rest in power pic.twitter.com/lljw5zGyWL