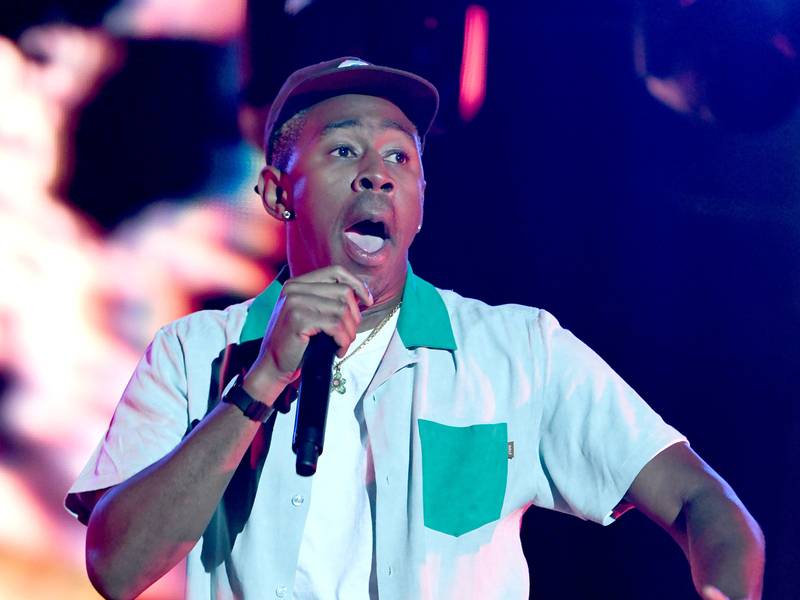 Tyler, The Creator Explains Why He Feels Eminem's "Relapse" > "Recovery"

Tyler, The Creator continued the is he/isn’t he argument on a recent episode of Funkmaster Flex’s Hot 97 show when he freestyled about “hot butt sex” with men. But the Odd Future founder also touched on some serious topics, including A$AP Rocky’s precarious situation in Sweden and his thoughts on Eminem.

In 2017, Tyler posted a tweet calling Em’s “Walk On Water” single “horrible.” As a result, Slim Shady included Tyler in his round of disses on last August’s Kamikaze, calling him a homophobic slur.

During the Flex interview, Tyler made it clear he’s always admired Eminem but also revealed why he was disappointed Em seemed to bow down to public pressure when making Recovery. He also explained why it’s selfish of fans to expect an artist to remake the same album over and over again — it’s simply not realistic.

“[Relapse] was like, ‘This is the aesthetic and what I wanna go with,'” he explained. “And he went 100 percent with what he liked on there. People trashed it, and he came with the Recovery shit with the pop hooks. The shit worked, and everyone gave high fives. The fans that didn’t really like it [said,] ‘I want the old Em.

“I want the Marshall Mathers LP Em.’ It feels like he read that, and was like, ‘Damn, you know what? Fuck, let me go back and try to rehash a moment.’ And when people go back, that is the grossest fucking thing. Move forward, get what you’re into for real.”

Tyler cited JAY-Z’s 4:44 as an example of an artist’s evolution.

“[It’s] an album very specific to what’s really going on in his life,” he said. “And it’s a perspective that no one else could have. I don’t want you to be like, ‘Fuck, I’mma go back to the old shit ’cause that’s what they want. Fuck what they want, give them what you want. This is just from a fan’s perspective.”

Although Em admitted anger fueled his Tyler vitriol on Kamikaze, he later said he regretted using the slur.

“I realized [it was wrong] when I said it, but I was angry when I said the shit about Tyler,” Em told Sway Calloway last September. “In my quest to hurt him, I realized that I was hurting a lot of people by saying it.”