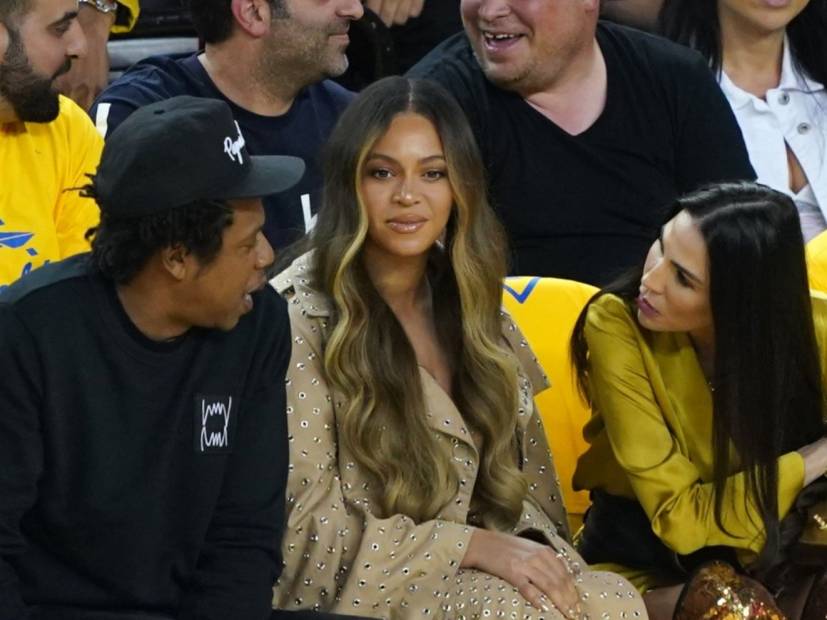 Curran was sitting next to the famous couple during the game and at one point, it appeared the platinum-selling superstar gave Curran a healthy dose of side-eye as she leaned in to talk to Hov.

Like bees to honey, The Beyhive flocked to Curran’s social media and proceeded to bash the unsuspecting woman. It was evidently so intense, Curran ultimately set her Instagram account to private.

As suggested by The Blast, The Beyhive may have overreacted — just a little bit. Beyoncé appeared to have a congenial interaction with Curran before she turned her attention back on the game. Beyoncé also didn’t have Curran thrown out like some suggested. She later returned to her seat.

Despite the perceived online embellishment, Beyoncé’s courtside “mood” did equate to meme gold. Check out some of the best reactions below.

I would leave the earth if Beyonce looked this ready to smack me https://t.co/Yaf4JKeMhN

beyonce is so annoyed by this woman and hov gon’ hear about it on the jet pic.twitter.com/0na9BTL6C6

Beyonce is every girl when another female tries to chat up your man pic.twitter.com/novDy4pxLw

I personally, think that #Beyoncé was probably tired of all the chattering🤷🏽‍♀️ pic.twitter.com/T2ulI6Dnn0

“It’s above me now. There’s a Best Western next door.” #beyonce 🐝 pic.twitter.com/OHCZViDSIs

Here we have Beyoncé in rare form! If you look closely at her left arm you will see her slightly nudge ole girl, a discrete but mighty signal saying…BACK THE HELL UP! pic.twitter.com/LGaZHJ8rIw

YALLLLLLLLLL …. why to the gworls keep trying it? That scoot Beyoncé did had me in shambles 😩😩😩😩😩 https://t.co/SZCcWKjDlr

Beyoncé is every oncologist seeing a trial presented at #asco19 with promising improvement in PFS but no OS benefit pic.twitter.com/nVvxVQnpMi

PSA: Beyoncé has a right to personal space.

…even at a basketball game. pic.twitter.com/fQJvEAJE6d

Good morning to everyone except this wh*te lady that was annoying TF out of Beyoncé last night pic.twitter.com/6UHCjzVEAG

this video of beyoncé pushing a lady is so funny to me… idk why 😭💀 pic.twitter.com/8rUianbDJS

Beyonce: “This Becky with the good hair bout to get her wig split” pic.twitter.com/1BpSWdYzNB