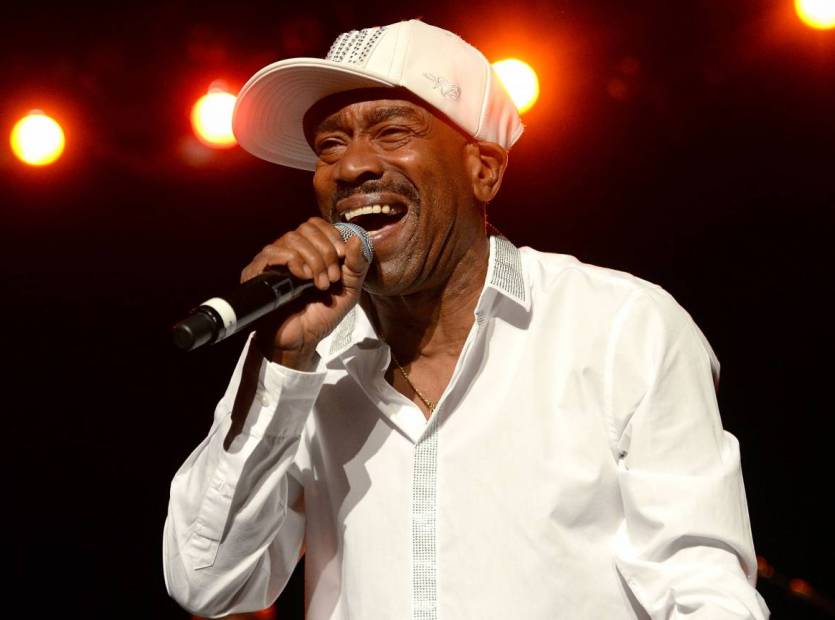 Blow made that official when he released the game’s most memorable ode 35 years ago. The nexus of Hip Hop and basketball has always been Blow’s passion along with being a minister spreading his Christian faith.

“The whole connection of sports and Hip Hop is rhythm,” Blow said. “The same rhythm that it takes for an MC to flow and deliver vocals is the same rhythm for anyone who is an athlete in sports. You’ve heard it over and over before, in order to block a shot you have to be in rhythm with the shooter. There’s a rhythm to dribbling.”

As he’s recovering from his recent heart surgery, Blow spoke with us about the backstory of penning “Basketball” in 1984. He also gave his thoughts about today’s NBA and how he raised $20 million to erect the Universal Hip Hop Museum.

HipHopDX: Take me back to the recording process and how you conceptualized your song “Basketball.”

Kurtis Blow: It was 1984 and the idea came from, believe or not, my wife. My one and only rib, 35 years married to this great woman. Her name is Shirley Walker. She said, “Kurt, you should do a theme song for basketball, that’s your favorite sport. You know you watch it all the time.” And I’m a real sports fanatic. Actually football is up there for me, too. She said basketball doesn’t have a theme song and baseball has one. (Sings) “Take me out to the ball game!” during the seventh inning stretch. So, I went to my partner and writer William Waring and told him the idea and he came up with some lyrics that I definitely wanted to include the superstars in basketball’s history as well as the guys who were playing during that time. It was amazing, and it came up when that monumental [NBA] draft year, like four or five Hall of Famers: [Charles] Barkley, John Stockton, [Hakeem] Olajuwon, Michael Jordan…an incredible year.

HipHopDX: What other notable things happened to create the song?

Kurtis Blow: I went to my producers and got them interested in the song. What was really special about the recording process is we wanted to include the sound of a basketball. That was going to be part of our kick drum or bass drum and we did that. Jimmy Bralower, a great drummer and producer who went onto become one of the greatest drum programmers in the world, he actually designed some of it. That’s his snare from when he actually recorded the sound of a basketball and sometimes when basketball player shoots and it rattles (mimics basketball sound bouncing within the rim). It’s one of the predominant sounds that’s repeated throughout the song. And we recorded Mr. John Andariese, the great announcer for the Knicks who just died a few years ago. He starts out the song, “Now rapping at No. 1, Kurtis Blow!” That was a big thing recording him because he was a New York legend.

HipHopDX: Who sang the famous melody?

Kurtis Blow: We used [former Def Jam R&B singer] Alysin Williams who was the vocalist who came up with the melody for the song. She was my college buddy who once worked for Benny Ashburn, the Commodores’ manager. She actually convinced Benny to have her college buddy who was hot with a song called ‘The Breaks” to go out on my first tour with the Commodores on an 80-city tour in 1980 to open up their shows. We, in turn, hooked her up and got her to sing 70 to 80 percent of my songs that had background vocals like “8 Million Stories,” “The Games People Play,” “A.J., and ”If I Ruled The World.”

She was a part of all of it and her partner Audrey Wheeler, sang on them, too. It was a great collaboration of great people, and [R&B legends] Full Force was there working on the guitar parts and bassline helping me out. The other musicians were great, too, like J.B. Moore and Robert Ford. Halfway through the song, everybody knew this was going to be a big hit.

HipHopDX: You mentioned players who are your favorites in “Basketball” Who are some of the players in today’s NBA and legends from the 90s and 2000s who you would namedrop in an updated version of the song?

Kurtis Blow: That would be an incredible list. From the 90s to the 2000s, you have Kobe Bryant and Shaq and, of course, LeBron James, Derrick Rose, Clyde Drexler, so many players. And even today, “The Greek Freak” [Giannis Antetokounmpo], Damian Lillard, James Harden — what an incredible player. Kevin Durant, that whole Golden State team’s starting five! (laughs). You can name all five of them in the song — one verse about the Golden State Warriors — Anthony Davis, Carmelo Anthony, so many players. And every team has a couple players who should be in there, for sure.

HipHopDX: What’s your take on the NBA’s Western Conference dominating the Eastern Conference and the tampering among players and league executives this season, such as LeBron who tried to recruit Anthony Davis to leave the New Orleans Pelicans for the L.A. Lakers?

Kurtis Blow: Yeah that was the talk of the year because LeBron and A.D. have the same agent, trying to make it happen on the low. Look, if you look at the Golden State Warriors, you’d probably call that cheating (laughs).

HipHopDX: But great players joining other great players to be on dominant teams has always happened since the 60s Celtics, the 1972 and 80s and 2000s Lakers squads, the 1983 76ers who had five All-Stars on its roster with “Doctor J” who you mention in the song and 90s Bulls with Michael Jordan and Scottie Pippen.

Kurtis Blow: Right, so I’m not concerned with LeBron trying to get Anthony Davis because they need a couple more players. The Lakers need Kyrie (Irving) or Carmelo and they would probably be more talked about. But it’s a wrap right now. The league is on lock. It’s going to be quite difficult to beat Golden State. You gotta give that team the props. They remind me of the Boston Celtics with Bill Russell, those years when they won eight (titles) in a row.

Kurtis Blow: The Knicks lost 18 in a row this season. (sighs)

HipHopDX: Knick fans like Fat Joe, Jadakiss, Q-Tip and Spike Lee were hoping to get the No. 1 overall pick in the upcoming draft from its worst season ever but got the No. 3 pick instead.

HipHopDX: Do you think the Knicks having that $71 million in salary cap space and having the No. 3 pick in the upcoming draft will help them finally get marquee free agents? Or will they mess it up per usual?

Kurtis Blow: I just pray for the best. I’ll keep my eyes and ears open and I was hoping that when the draft lottery came out that Zion (Williamson) kid might be a Knick.

HipHopDX: Since their chance of getting Zion is out the window now, are you sold on the Knicks signing Kevin Durant and Kyrie Irving this summer?

Kurtis Blow: That would be the most incredible. I think Kyrie is an underrated player. He’s definitely top three material in the league and he really, really showed me something when he was with Cleveland and they won that championship. To have him in New York would be a win-win situation.

HipHopDX: Kyrie is from New York and his godfather is (former NBA All-Star) Rod Strickland.

Kurtis Blow: And that’s my buddy, Rod Strickland! I remember him when he was playing big time. We actually met and hung out at a couple events and stuff. He’s a good dude. That’s even better, like family almost.

HipHopDX: Let’s talk about the Hip Hop Museum. You and co-founder Rock Buccano have $21 million invested in this project?

Kurtis Blow: Well, we’ve raised close to $20 million. So far, the city council of New York has us on their books for $4 million in 2020 and we have an LOI and contract from the L&M Corporation for $12 million to start construction for 2019 and we’ll open the doors in 2023, commemorating the 50th anniversary of Hip Hop.

HipHopDX: Where will this be located?

Kurtis Blow: In The Bronx, the birthplace of Hip Hop, five blocks south of Yankee Stadium which address is 65 East 149th Street called the Bronx Point section, soon to be called the Downtown Bronx City Center. The city is actually putting up like $2.5 million to remodel the whole section of The Bronx over there. It’s prime real estate and where we will be is a huge housing development structure, 25 floors, and that same property will be a mini-mall, an outdoor concert venue, there’s going to be a movie theater. It’s going to be a nice little section of The Bronx and we have the bottom two floors which is about 5000 square feet.

The Universal Hip Hop Museum is proud 2 announce that Chuck D will serve as the Chairman of the UHHM's Celebrity Board. “The credibility he brings to our team is mammoth”-@KurtisBlow1, 12/19/18, @HipHopDX. #HipHop #UHHM #UniversalHipHopMuseum #PublicEnemy https://t.co/UIpLQYv6mA pic.twitter.com/jxy5nViAlJ

HipHopDX: Will basketball be part of the Hip Hop Museum? Basketball and Hip Hop have been married since the beginning of the culture.

Kurtis Blow: The whole connection of sports and Hip Hop is rhythm. The same rhythm that it takes for an MC to flow and deliver vocals is the same rhythm for anyone who is an athlete in sports. You’ve heard it over and over before, in order to block a shot you have to be in rhythm with the shooter. There’s a rhythm to dribbling. Anytime you hear an announcer say, “He’s out of his rhythm” when missing a shot. The rhythm to hit a baseball, to catch or throw a pass or to run. Anything in sports you use your rhythm more than your any other of your skills.