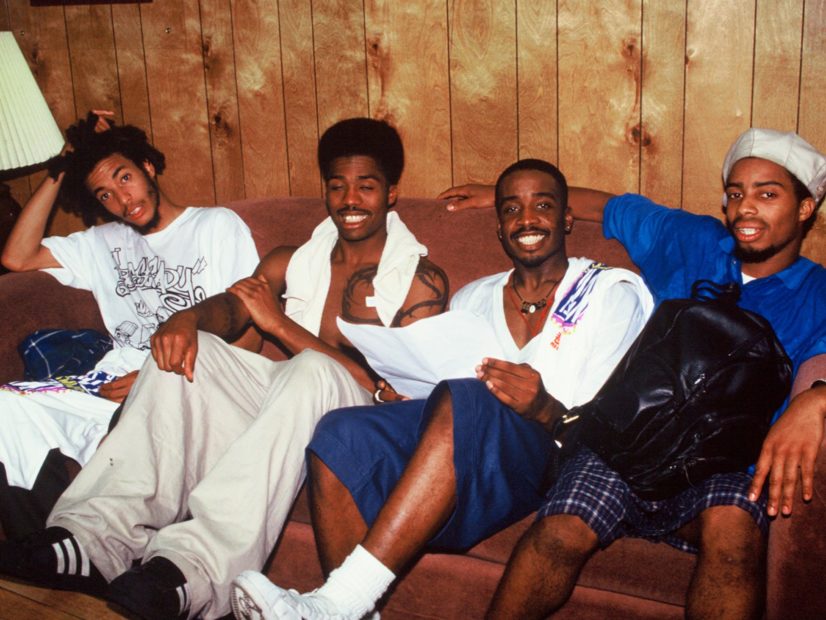 Slimkid3 Recalls Making The Pharcyde "Drop" Video In Their Underwear

While the original incarnation of The Pharcyde may be a thing of the past, Slimkid3 still looks back on those days with a satisfied sense of accomplishment. After all, the celebrated Hip Hop group crafted two classic albums during their tenure — 1992’s Bizarre Ride II the Pharcyde and 1995’s Labcabincalifornia.

Labcab‘s first single was “Drop,” which came with one of the most innovative videos Hip Hop had seen up to that point. Directed by famed videographer Spike Jonze, the visual was intended to look like it was shot backwards.

But as easy as that sounds (just shoot it in reverse, right?), it was a monumental mission that required all four MCs — Slimkid3, Fatlip, Bootie Brown and Imani — to memorize their lyrics backwards.

“Spike Jonze was brought to the table to talk about ideas and he picked this song particularly because he worked with the Beastie Boys,” Slimkid3 tells HipHopDX. “He was like, ‘What if we did this ‘Drop’ video going backwards and reverse and stuff like that?’ We’re like, ‘Oh shit. Hell yeah.’

That proved to be quite the feat. It required professional training and hours upon hours of studying.

“We had a linguist come in and teach us,” Slimkid3 explains. “He had to break the shit down. It was like a different language. So we studied on the plane, we studied on the train, we studied everywhere to try to get this. I feel like we needed one more day and we would have had that lip sync seamless. Because it’s like, ‘OK, now we got it — just even forming the words and what have you — and now we gotta put it in motion.

“Like, ‘Oh fuck. Now the camera’s on and we’re changing clothes and going through all these parts.’ Then we had a conversation about what would be fresh backwards. I was like, ‘We can un-paint the painting.’ We were supposed to have more bouncing balls bouncing up the stairs while we were going down. So, there was other cuts of it. You can see the magic of the balls bouncing up the stairs and there was just so much stuff that we were like, ‘Let’s try it all.'”

Looking back on the making of “Drop,” Slimkid3 does have one regret. There’s a scene where they all strip down to their underwear while wandering the streets of Los Angeles. He believes they should’ve just went for it and filmed the scene entirely naked.

“I think we should have took an extra step, and I’m sure the guys would agree, to go all the way naked — you know, all the fucking way downtown,” he admits. “The only people that knew about what was going to happen was us. The people walking down the street and waiting for the bus and all that shit, they didn’t know shit. It was early in the morning, like 4:30 or 5:00, and there we were doing this scene.

“The people would even change because they gotta go to work. Here we are in this alley doing this party and stripping all the way down to our underwear and shit like that. We got soaking wet. We did six takes or some shit. So that was six different outfits. It was just a huge undertaking.”

Although the visual turned out as Jonze had envisioned it — complete with cameos from Beastie Boys’ Mike D, Adam “MCA” Yauch and Adam “Ad-Rock” Horowitz — Slimkid3 will never forget how “crazy hard” it was to shoot.

“You had to keep up,” he says. “You didn’t know where you were going. You were just going backwards and saying shit. Then you had to fall off camera and the camera kept pushing by you while other stuff was happening. It was pretty magical though. It was a lot of fun. It was the most fun I had making a video to be honest. It was really good.”

Sadly, The Pharcyde started to deteriorate not long after Labcab‘s release. Slimkid3 and Fatlip went on to form The Bizarre Ride, while Bootie Brown and Imani still perform as The Pharcyde.

Check out one of Slimkid3’s latest endeavors below.