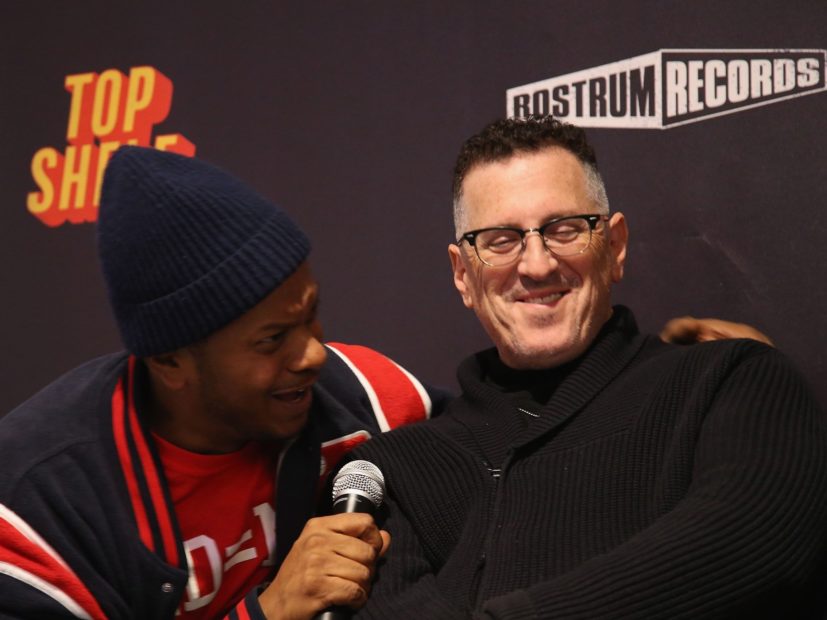 The 13-track project was billed as a “treasure trove” of unreleased cuts from artists such as Big Daddy Kane, Doug E. Fresh, Craig G, Biz Markie and Jungle Brothers. The 3rd Bass MC, who was instrumental in making the television appearance happen, figured the timing was right.

“I spoke to ABC last November thinking this is the 30th year — Top Shelf was from 1988 — so it would make sense to end the year with this Top Shelf tribute,” Serch explains to HipHopDX. “ABC New York had one of the first video shows called ‘Hot Tracks’ that would play rap videos, so it was a vibe as far as I was concerned.

“It also was about treating our MCs from the golden era like the stars and icons they are.  To me, the only difference between The Beatles and Big Daddy Kane or Chubb Rock is that The Beatles had hundreds of radio stations playing their music all day, every day. We had college radio who played it a few times a week late at night and urban stations that played it a few hours Friday and Saturday. Yet these artists are still revered and honored just as much, but not with the fanfare.”

Evidently, Rostrum felt similarly and they, along with Serch, put their resources into making the set unique.

“The stage was not just mics and turntables,” he says. “It was 4K digital motion graphics that took a team of five people, three weeks at 20 hours a clip to create. It was Lyte, Special Ed and Chubb rehearsing. It was also respecting those persons who got us there, plus honoring those who helped and were no longer there.  It was magical and meant the world to me. It validated the audience is there and we should push to make them aware.”

Although Good Morning America isn’t exactly the typical platform for classic Hip Hop, Serch believes it was the “perfect target.” Many viewers of the show may have grown beyond the culture but still have a strong connection to the nostalgia the music stirs up. The segment wound up pulling in the second-highest ratings of 2018.

“GMA and [host] Michael Strahan were the perfect mixture,” Serch explains. “He gets it. Their crew gets it. The people in the audience get it. The groundswell leading up to it was great and the timing couldn’t have been better. This audience who may have gone on with their lives and disconnected from the culture didn’t disconnect from the music.

“They [the audience] have very little time to hunt it down. So when it’s there for them, they not only gravitate and get excited, they also connect with their people and let them know. Now, it’s just a matter of keeping it in their face with music videos and integrations, tours and eventually something bigger.”

Some tasty treats from a nasty project. Top Shelf 1988 @therealgrandpuba

Top Shelf 1988 didn’t come without a little controversy. The music from the album was allegedly unearthed by an unidentified New York Hip Hop aficionado who discovered a box of studio reels inside a storage locker in Hoboken, New Jersey. The only clue to its contents was the name “Fab Five Freddy” written on a label.

The reels found were supposedly recorded at an East Village studio in Manhattan called Top Shelf and rumored to be lost during the 1988 Tompkins Square Park riots. Some people labeled the entire tale a “hoax” and figured out the tracks weren’t actually from 1988 as led to believe.

“I think that all publicity is good publicity,” Serch says. “Seriously, it’s in poor taste to challenge this project as a hoax. It’s a hoax the same way A Star is Born or Hustle and Flow is a hoax. The key difference is these artists are portraying themselves from a time remembered as the golden era and what many feel was the greatest year in Hip Hop.

“Every generation has a ‘Best Year.’ I have been truly blessed to be around a lot of them. For me to be 20 years old in New York City watching a street art become a way to pay my bills and see the world were the greatest times in my life.”

Regardless of the rumors swirling around the project, Serch is simply happy it exists.

“To have these amazing artist putting out records that, to me are great records and what our artists of the golden era should continue to make, is really the way it is supposed to be,” he says. “This album and what has been going on with the streaming services Pandora and Spotify discussing a platform for Top Shelf, and LL Cool J’s Rock The Bells Radio not only playing the new music but also including the artists with their stories and voices, it gives me great pleasure in talking to my heroes and hearing the feedback.

“I have not spoken to Grand Puba in decades and to hear his voice and talk about music was so gratifying. To talk to [Black Sheep’s] Dres, who I have not spoken to in awhile and talk music again, is such a blessing for me. This project will give the fans, new and old, a look at another range of talent and skills that they may not have known about.”