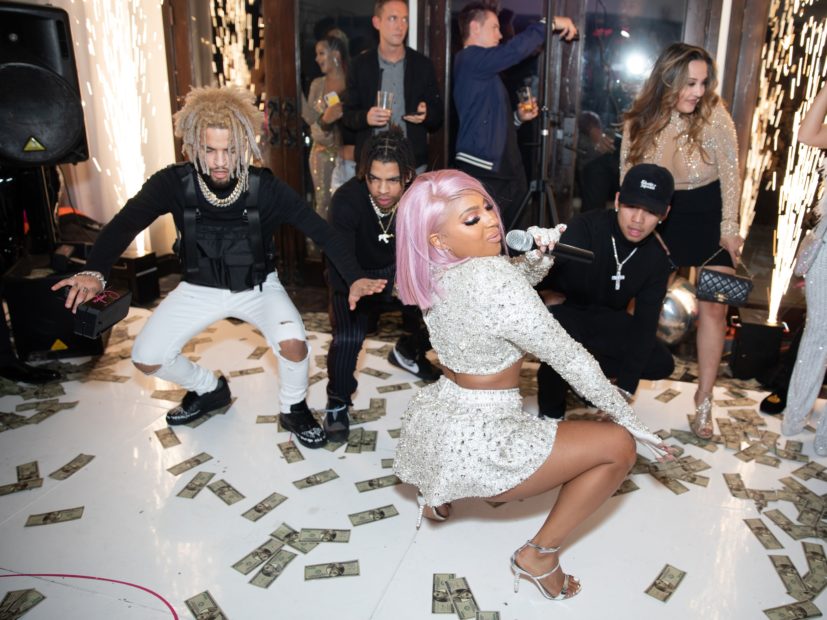 Los Angeles, CA – Singer-songwriter and dancer Candice Craig brought in 2019 with some for her closest friends, family, and supporters for an extravagant 2019 New Years Eve party. The event, which also happened to land on her birthday, is where she formally debuted her new single “Bands Up” (a #DXHitList fave) to the world for a banging performance with the help of The Future Kingz as her incredible back up dancers. The luxurious vibe, and popping pink set up was produced by Xtina Milani Events.

When ppl ask me what “Bands Up “ means … ???? ft. @thefuturekingz #BandsUp available on @applemusic @spotify

Held in a massive mansion on Mulholland Drive, the party was packed and music filled the estate courtesy of DJ Muda. There was a never-ending supply of Ciroc and Bel-Air champagne flowing throughout the entire night and more than enough bites, including a gorgeous woman lying on a table adorned in pink rose petals and sushi, who was kind enough to let a ravenous crowd eat off her.

Some of the guests who came out to help celebrate the New Year and release of her new single “Bands Up” included Los Angeles Laker Lonzo Ball, her boyfriend retired NFL player Omar Bolden, Hip Hop fashion designer Karl Kani, The Bobby Brown Story‘s Woody McClain as well as popular social media influencers such as B. Simone, Watch Jazzy, Liane V, Don Benjamin, Dan Rue and Jessica Burciaga, among many others.

In the spirit of “Bands Up,” $100 dollar bills with Candice’s countenance covered the floor. There was even a dollar sign ice sculpture and money guns guests could play with while dancing the night away.

This was Candice’s way of entering the new year and her new song “Bands Up” is a complete mood. Before the party kicked off, HipHopDX sat with Candice and got some advice from the famed dancer about the key to getting your bands up in 2018, her time signed to Island Def Jam as part of girl group Girls United and why it’s important for her to try her hand at going solo.

HipHopDX: Your new song is called “Bands Up” and it’s fire. What’s the best way someone can get their bands up in 2019?

Candice Craig: Really believe in yourself even when they tell you it’s not possible. That, I feel like, is the key to life. You have no boundaries ever. Don’t let anyone tell you that. 25 no’s for one yes. When you remember that ratio you will win. It is what it is. Not everyone is going to believe in you and “Bands Up” is about being a boss bae, owning up to it, getting your own money, your own happiness and love. “Bands Up” is universal and I feel like it’s something that all men need to hear, all women need to hear, everybody. Believe in yourself and it’ll all happen.

DX: You’ve accomplished a lot in your career so far and now you’re going full speed ahead as a solo artist. Tell me about your time signed to Def Jam, being part of that girl group and getting on X-Factor.

CC: I was signed straight out of Miami. I was in a girl group called Girls United. We were flown out all the way to New York to meet with Karen Kwak who at the time was under L.A. Reid and we had to do the typical, old-school record deal signing situation. We had to go in there and perform for him. We left the big building in New York, we get a call from the label and it was them calling to offer us a deal. We were so young, 17 years old, not even 18 yet getting signed by L.A. Reid to Island Def Jam and we couldn’t have been any more ecstatic. With that money, we moved to Los Angeles. We were a group for about eight years. We did X-Factor and made Top 10 groups with Simon Cowell and it was the same time Demi Lovato was on there and so was Kelly Rowland. The group fell apart because one of the girls wanted to be a sugar baby. I decided to go solo after that. It’s been about two years and this is the first year where I am diving head first into it and putting the music first.

DX: Since you’re doing your own thing now, what are your expectations this go around?

CC: I just feel like it’s finally the time. I’ve been in a girl group for so long and in between leaving the girl group and being signed to Island Def Jam, I was on tour with Nicki Minaj, Pharrell and I was dancing for Chris Brown and doing all these huge shows. I’ve always had to cross-pollinate and do two at the same time so this year I really want to focus on the artist side and really hone and dive in deep. Nothing else really matters right now and there is only a plan A so we just got to dive in head first.

DX: What lessons are you bringing with you as you embark on this new journey of being a solo artist?

CC: So many things. The money side, the business side of things, having friends in the business, some people don’t have the best interest for you some people do. You learn about people and that the people around you are very important. You also learn about building the right team. Everybody around you matters and I think that’s one of the biggest things I learned because you can’t do things without the right people. Family is super important and keeping them close because it’s super cutthroat. One minute you’re hot and one minute you’re not. Just being level-headed and enjoying yourself because it really is about the process. We all have goals and aspirations but it’s just about enjoying the journey and that’s why I feel so fulfilled in my life right now because I realized that I choose everything. I choose who I want to love, I choose what I want to do.

DX: You are an amazing dancer and clearly know how to make a bop, what’s your favorite part about performing your music?

CC: I love being in the studio creating it and then seeing it come to life by actually performing it. So from the process of having a vibe when I go into the studio whether it be with a writer or producer and addressing the vibe of the day. Sometimes you’re happy and sometimes you feel like you want to slap a hoe. Whatever that feeling is, I love that it can translate over and then I can put on a whole performance to create a whole vibe for the crowd to catch it. The moment they catch it is the best part about performing.

DX: You’ve pretty much built what you have going on now from your clothing line to your music career on your own. What drives you to wake up every day to go work out, go hit the studio, put out the song, make the fashion line and really just put yourself out there?

CC: Honestly, this might sound cliché but I do it for my family. I do it for the people I love and the people who believe in me even when I gave them nothing to believe in. My family is my number one and they’re proud of me. I want to take care of them and I want to have it where they don’t have to work. I don’t want my mom to work anymore. We are almost there. I feel like I’m right at the tip. When I can buy her a house and she doesn’t have to work anymore I can look back, like damn we finally did something.

Peep all the action from Candice Craig’s NYE “Bands Up” single release party below.