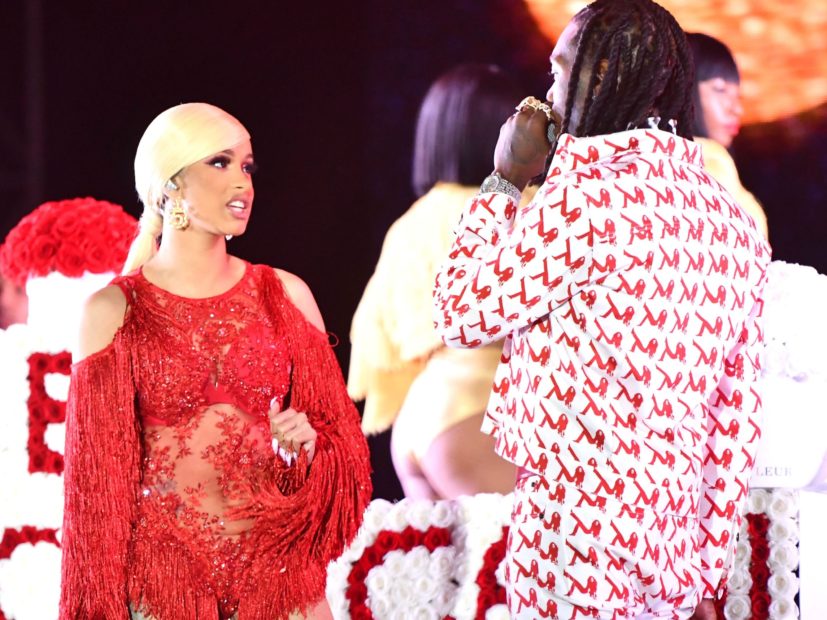 Offset crashed Cardi B’s Rolling Loud set at the Banc of California Stadium in Los Angeles on Saturday night (December 15). As her performance was about to begin, a series of flower arrangements were wheeled out to the stage that read, “Take Me Back Cardi.”

The Migos rapper then appeared from backstage with more white flowers and said, “I wanna tell you I’m sorry. I love you.” After a brief exchange, Offset seemingly walked away without any type of reconciliation.

The rapper brought out flowers and a cake set up that spelled out “Take Me Back Cardi” on stage. Cardi B was not feeling the gesture and had him and the set up removed. pic.twitter.com/MBh3xUWrls

Following the stunt, Cardi hopped on Instagram Live where she stood up for her estranged husband, explaining she’s tired of the constant online ridicule.

“Even though I’m hurt and I’m going through a fucked up stage right now, I don’t want nobody fuckin’ talkin’ crazy about my baby’s father neither,” she said. “I smack bitches and I will fuck niggas up. I’m a little upset because it’s just been a very long two weeks and I’m so tired of the bullshit. I get it. I get it. I totally get it.

Cardi B took to Instagram Live to share her thoughts on Offset’s pop up at @RollingLoud. pic.twitter.com/jvTw9cFLrj

The platinum-selling rapper also posted another video to her Instagram account and addressed the people bashing her for coming to Offset’s defense. She also mentioned SNL actor Pete Davidson who indicated he was feeling suicidal in a post to his since-deleted Instagram account.

Cardi announced she’d split with Offset on December 4 amid allegations of his infidelity. Since then, he’s publicly begged for her forgiveness on at least two occasions. The night of his Friday (December 14) birthday, he posted an Instagram video denying he’d slept with alleged mistress Summer Bunni and said all he wanted for a birthday present was Cardi.

Despite the drama, Cardi insists she will remain friends with him for the sake of their daughter Kulture.