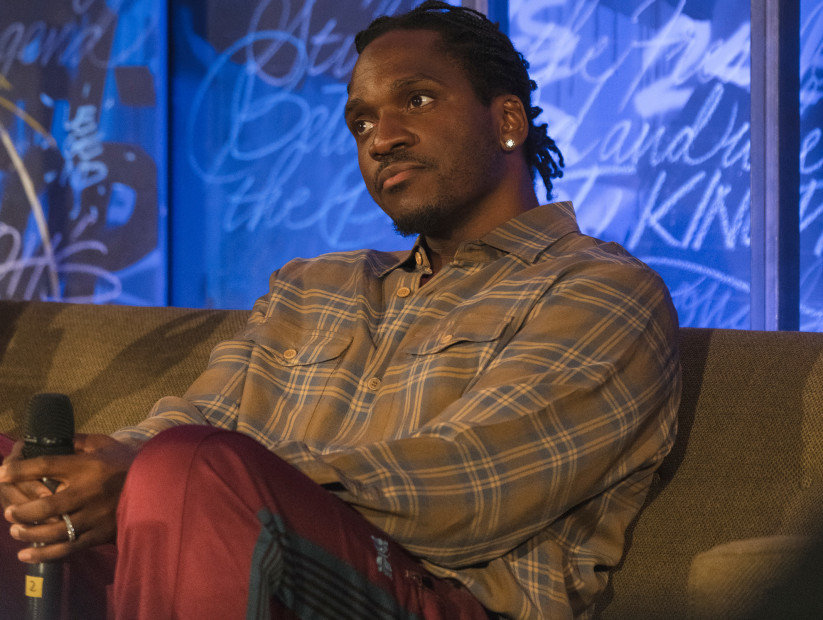 HipHopDX was on hand at Kino International to watch King Push drop some serious gems without spitting a single bar.

From his serendipitous beginnings, growing up near Pharrell Williams, Chad Hugo and Timbaland in Virginia Beach to his belief that rappers are making bloated albums for streaming numbers and of course working with a boss (Kanye West) that has some tremendously polarizing political views, the hour-and-a-half long conversation is definitely worth your time, but to give you a taste here are five of the highlights from Red Bull Music Academy Presents: A Conversation with Pusha T.

Sitting below New York City, Virginia saw an influx of, not only that signature sound that put the East Coast prominently on the map but also the drug culture that was hitting hard in the 90s. Pusha, who has previously cited The Purple Tape and Life After Death as heavy influences, remembered the chaos that arose from a combination of that sound and culture.

“Virginia Beach isn’t really a big city. It’s not. I think that’s [what’s] so special about everything that came outta there. It’s a military town actually, so when it came to musical influences I always knew about what was going on in southern Hip Hop, Bay Area Hip Hop, of course, New York, New York [had a] heavy influence in Virginia at the time,” said Pusha. He added “It’s a military town, it’s also a college town. Norfolk State University, Hampton University, ODU (Old Dominion University), a little further out Virginia State. Colleges everywhere and during this time New Yorkers flooded our area, super flooded our area. The drug culture was super heavy. It was really a big thing at the time. Living through that and like, I actually seen B.I.G. in a club, Raekwon was friends with some of my friends, so when these albums hit it was like chaos through the town. You had everybody in the town talking like they had adopted the slang of Wu-Tang and you just saw the Bad Boy influence super heavy. These guys were great, and living through that time and seeing it had a major impact on me.”

When people speak of Clipse, The Neptunes immediately come to mind. After all the super duo produced their breakout single “Grindin” as well as their debut album Lord Willin’. But the two entities actually crossed paths nearly a decade prior to that. And it was thanks to that relationship and the influence of his brother No Malice, that Pusha T is the MC we know today.

“My brother was always rapping. I wasn’t rapping. My brother is five years older than me. When he was in middle school he was part of a rap group, that the principal called a gang. It was a group of guys who were all duos and the producer and DJ for everybody was Timbaland,” said Pusha.

“I didn’t start rapping until probably ’93, maybe even later. I just remember it not being cool to say that you were rapping. When I was growing up I remember watching my brother and all of them be into it and then my generation came, it was sorta like ‘You rap? Get outta here. You better go get on the block and go get some money,’ or something like that.’ It definitely wasn’t about rap at the time. I had friends who were in the music industry. I told you Timbaland was the DJ for my brother and those guys. He lived up the street one way, Chad and Pharrell lived up the street a mile away. I wasn’t rapping when I knew them. It was just something in the water. Who knows? It was just the weirdest story to know how close in proximity we all lived and we all knew each other,” said Pusha.

“I was skipping school going over to Chad’s house and everybody would be over at Chad’s house writing records and I’d just be listening and [one day] I was like ‘I’ma write me a rap today.’ The bar was pretty much set though. I was always into the music. I always knew what was cool in regards to what was cool to say. I could tell the difference. My brother was like the perfect teacher for me. I was young and telling my brother, ‘MC Hammer’s the best rapper ever. You gotta see this guy,’ and he’d be like ‘no man, he’s a great entertainer. Let me show you what a rapper does.’ He sort of gave me that type of breakdown. It was pre-school for rap.

On How Their Friends’ Indictments Inspired No Malice to Quit Rapping

After years of label drama with Jive Records, Clipse had hit their stride for the second time. A blessing not afforded to many in the music business that has taken lengthy absences. But in the spring of 2009, the success became an afterthought as some of their closest friends were facing some serious charges.

“April of ’09 everybody who we came into the music industry with, outside of my rap friends, were indicted on a drug conspiracy. It was a drug conspiracy and everybody got from 10-34 years, so for my brother, I’m not trying to speak for him but I think he saw things a little differently. His kids would go to bible study with their kids. He saw the effects in a different way than I saw it if you ask me through the kids, and he was not with it,” said Pusha, who noted that from that point forward going solo was the only option.

“I don’t feel like I had a choice [but to go solo]. I have management. I got friends that are relying and living off of what it is that I do. It was just ‘that’s the next step. Let’s go.’ Ironically, I think I was in like Sweden and Ye called and was like ‘hey man, wanna come to Hawaii and work on this album with me?’ And I was like ‘sure.’ That’s how I got all my miles. I’m a million miler. I got all these miles cause I kept flying from like Hawaii to Sweden. I was on tour in Europe at the time my brother told me [he didn’t want to rap anymore] so when he asked me to come I was like ‘okay boom, if I got three days off I’ll just fly out there, and he’d fly me out there, fly me back, fly me out there, fly me back like a trillion times.”

On His Entire Unreleased Project That Kanye Deaded

Kanye’s now famous trips to Utah and Wyoming yielded some of the summer’s most talked about projects, the first of which was Pusha T’s Daytona. According to Push, his original Kanye-approved incarnation of the album was ready to roll when Kanye had a last minute change of heart.

“Before going into Wyoming, what I do is I just go around and I sit with producers: All types of producers, new, young, whatever. [If] I hear anything that I like I take it I rhyme to it, lay it down and just store it. When I found my voice on the project, and found the direction and, just the whole theme of the project I take it to Ye and be like ‘Yo, I got my album’ and nine times out of ten he hasn’t heard the verses. I may have given him the beats and he’ll be like ‘Oh I like that one, I don’t like that one’ or whatever. So between me picking and between him picking through that I write all of those and I let him hear it, and I’m like ‘yo we got the album. What’s up? Let’s round this out real quick’ and this time, a lot was going on at the time with him, and he was like ‘Hey man, I actually think I can do this better,’ and I was like ‘alright.’ I’m ready to come out though. I’m fuming inside,” admitted Pusha. “I was like ‘you do know that you picked all of these beats. You did this. You A&R’ed this project.’ He was like, ‘I know man I’m just telling you I can do it better. Why don’t we just go away. I need some therapy anyway.’ (Laughs). That’s when Utah and Wyoming and all that starts.”

On Working With Kanye Despite Disagreeing With His Political Stances

It seems like everyday Kanye is trying to one-up himself (such as hugging Donald Trump while wearing a red MAGA hat inside the Oval Office). But Pusha T knows Kanye better than anybody and says the intent is pure.

“I feel like Kanye, he’s been a person who definitely tries to get his point across at all costs. And he’s willing to like go through all types of hell and damnation to get his point across and piss people off and everything if he believes that it’s gonna pay off in the end. I truly believe that everything that he thinks and all of his views, he feels like it’s gonna pay off in the end,” said Pusha. “Even though we don’t agree I personally know that I know him, I know his heart and I know that he’s, more so than anything, he’s all about making things better, for the world, for people, he’s about peace, he’s about giving people a shot. I’m not like that but he is, so when it comes to us and dealing in that and the working dynamic of that, it’s like we just agree to disagree and it’s not an excuse to be made. He don’t want no excuses made for him either. He doesn’t. I wouldn’t. But I can just say that I know him personally and I know that he is in his mind is telling him ‘I need to go through these channels to make these other things happen and I’m willing to exercise that and y’all can stone me.’ He’ll go for it like that.”