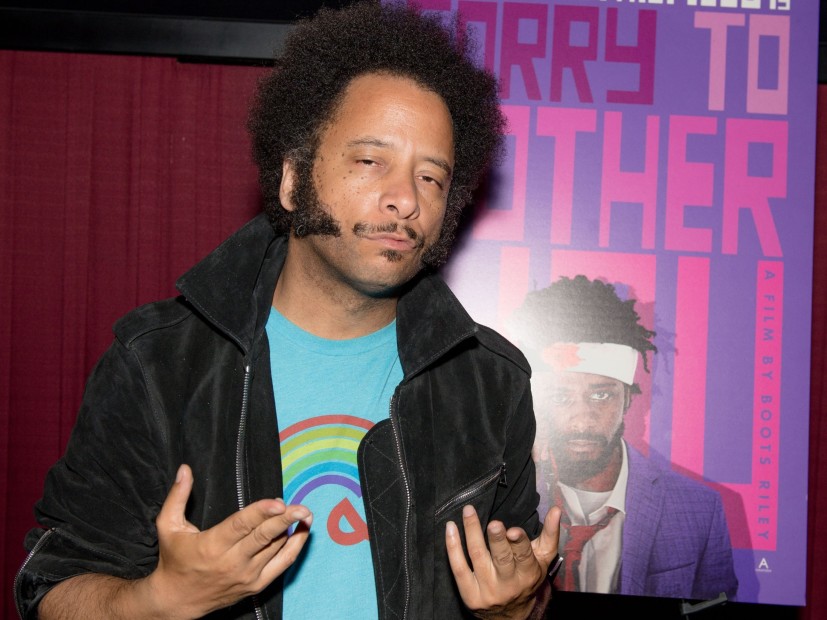 Boots Riley, frontman of The Coup, made his directorial film debut with the dark comedy Sorry To Bother You. The movie was released on July 6 and has collected rave reviews from not only numerous critics but also his peers.

Starring Lakeith Stanfield, Tessa Thompson, Patton Oswald and Danny Glover (among others), the film centers around Stanfield’s character, Cassius, who works at an Oakland call center.

Only until he is taught to adopt a “white voice” when cold-calling people does the struggling Oaklander find success as a telemarketer — but it comes at a high price. During the process, Cassius begins to sacrifice his morals as he climb the corporate ladder.

Even before the film’s release, Riley was being heralded as the next breakout director. He recently got a monster cosign from Get Out director Jordan Peele.

“@BootsRiley is being compared to many great directors, but the truth is he’s a one-of-a-kind unique voice,” Peele tweeted last week. “Fun, brilliant and totally different than anything ever.”

#SorryToBotherYou . @BootsRiley is being compared to many great directors, but the truth is he’s a one-of-a-kind unique voice. Fun, brilliant and totally different than anything ever. Catch it this weekend!

Riley also plans on releasing a soundtrack for Sorry To Bother You, which will be orchestrated by The Coup. In a tweet at the top of the month, Riley revealed features will include artists such as Janelle Monáe, Killer Mike and E-40.

The Coup has "The Soundtrack to Sorry To Bother You" (which is different than the 2012 album of the same name) dropping very soon. All new songs.

We're honored to have our song "1000" featured in this special #SorryToBotherYou trailer. @bootsriley writes and directs with the same passion we put into this song. Go get your tickets to the movie now! pic.twitter.com/Yr2WADS9kR

#SorryToBotherYou writer/director @bootsriley is the future of movie making. Inventive. Unique. Diverse. @nerdarmy is honored to have our song "1000" featured in this special trailer. Go get tickets now and support OTHER voices! pic.twitter.com/BNuygX4Uea

My first post as a new academy member. This is exciting: the #GetOut esque buzz that #SorryToBotherYou is generating is no fluke. It’s THE must see film of 2018. And without a doubt I… https://t.co/g4iB5CCYXY

whoa just saw #SorryToBotherYou and it was fiery.

thank you for this @BootsRiley.

and thanks to everyone else who was involved in bringing this to life. if you acted in it or held a mic in the air or fixed someone’s make up or hair or if you were in the theater with me, thanks

Sorry To Bother You. Wow. I’m speechless, that was phenomenal. Everyone go see this movie ????? as soon as you can

#SorryToBotherYou was one of the most unique, funny, arty, angsty, hopeful things I’ve ever seen. There are so many little fun and symbolic details, that scream anything but directorial debut. @BootsRiley might get an Oscar for this

I saw #SorryToBotherYou four days ago and its still resonating with me. its relentlessly brilliant. gonna watch 4 – 7 more times

Is this playing near you tomorrow? GO SEE IT. I've seen it twice now and I'm so jealous you get to experience this mind-punch for the first time. #SorryToBotherYou https://t.co/pE7iatilxa

Sorry to Bother You is fantastic. Hilarious, angry, bizarre, surprising. Nothing like it. I don’t think it’s possible to regret watching this movie. I LOVED it.

I say this all the time, @BootsRiley’s writing on Kill My Landlord changed how I looked at the world around me – so much so that I tat’d The Coup’s logo on my arm. Go see #SorryToBotherYou, then listen to Kill My Landlord. RIP The Funkstress. “…Capitalism is like a spider…” pic.twitter.com/bpIENwYbkN