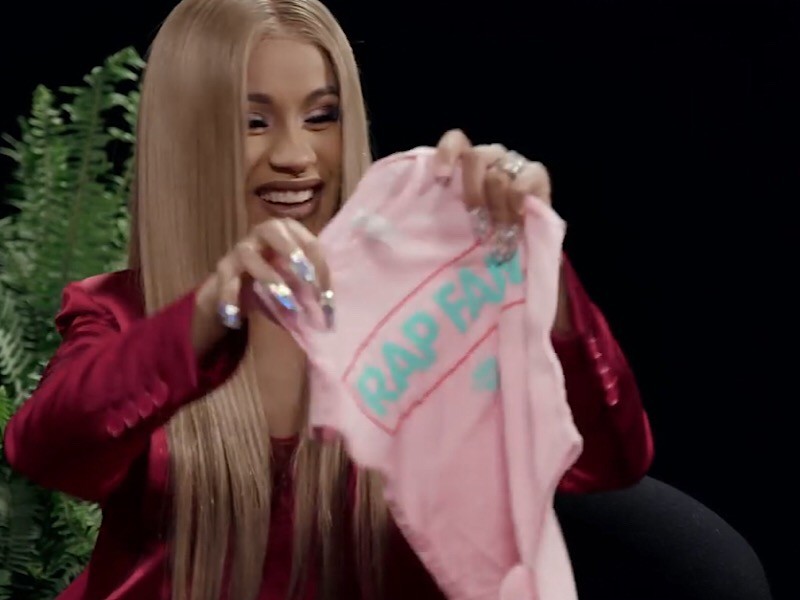 Cardi B made a brief but funny appearance on Between Two Ferns With Zach Galifianakis, breaking the tension between Galifianakis and guest Jerry Seinfeld.

However, the unspoken star of the show was a onesie from Trackstar The DJ’s “Rap Fan” line.

Following a dry interview with Seinfeld, Galifianakis brought out Cardi. “We have a better guest,” he announced before quickly correcting himself.

After some initial pleasantries, Galifianakis presented Cardi with the “Rap Fan” gear, which is a merchandise line owned by Trackstar.

“I woke up to a bunch of messages through every way a person can be messaged,” Trackstar tells HipHopDX. “By far the most interesting to way I’ve woken up in some time.”

The Run The Jewels tour DJ admits he was just as surprised as anyone to see his brand on the video.

“I’m pretty sure the onesies are sold at this boutique in La La Ling in Los Feliz,” he explains. “That’s where they got it from because I haven’t sold any on the website (recently).”

[UPDATE: Trackstar reached out to clarify that he has been selling onesies on the site, just not to anyone in Los Angeles as of late]

When asked if he’s anticipating Cardi sharing pictures of her baby in the gear, Trackstar noted that he’d reached out to her on Twitter, offering another custom onesie. But, he hasn’t received a response.

“Even with the Cardi B promo look, I thought it was cool just to have Rap Fan gear next to Jerry Seinfeld,” Trackstar admits. “I still haven’t met him yet.”

Check out the Between Two Ferns episode below.