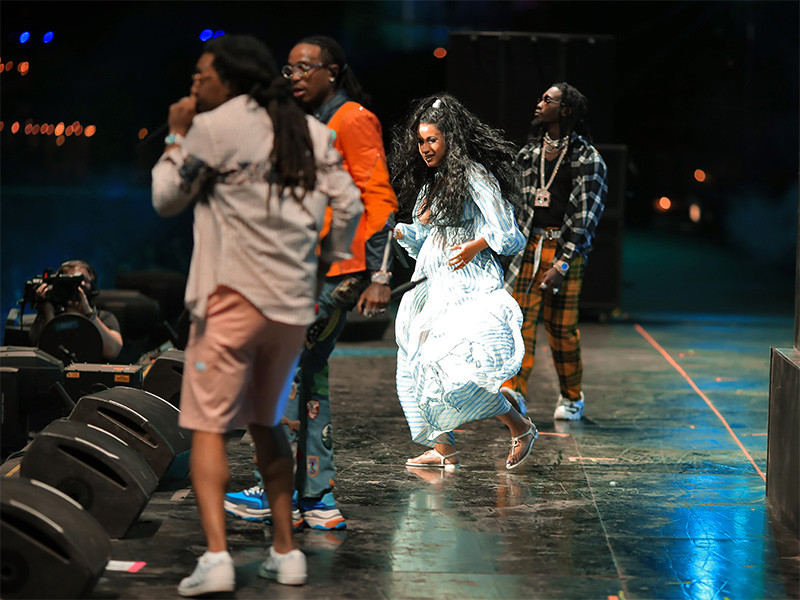 Coachella 2018: Cardi B Performs With Migos & Gets Pregnant Belly Pat From JAY-Z

Indio, CA – In addition to performing during her own set at Coachella over the weekend, rapper Cardi B also made a surprise appearance during Migos’ set at the annual music and arts festival.

Card joined her fiancé Offset and the rest of the Atlanta trio to perform Culture II record “MotorSport.”

For her own performance, Cardi switched things up on the special guest end, recruiting SZA, J Balvin, and Bad Bunny for Sunday’s (April 22) performance.

With help from her surprise guests, the Bronx rapper went on to perform the Invasion Of Privacy tracks “I Do,” “I Like It,” and more.

seeing my favorite song performed live by my favorite artists is crazy to me ?? i will never be the same @iamcardib @sza pic.twitter.com/pyxibzHzQX

Coachella was successful! ? Cardi B brought out J. Balvin & Bad Bunny during her set for “I Like It.” ????? pic.twitter.com/NHpiI8UPmS

Following her performance, SZA offered praise to Cardi in an Instagram post, wondering “how she does it.”

“Umm dead ass saw this queen at 2am last night and she WASN’T sitting…Iono how she does it!!,” SZA wrote.

Umm dead ass saw this queen at 2am last night and she WASN’T sitting…Iono how she does it!! ??????Thank you SO much for having me ! Sooo fucking inspiring to watch! ?#IDO ?#BOACHELLA??? @iamcardib

And earlier in the weekend, Cardi was greeted by JAY-Z during Beyoncé’s set.