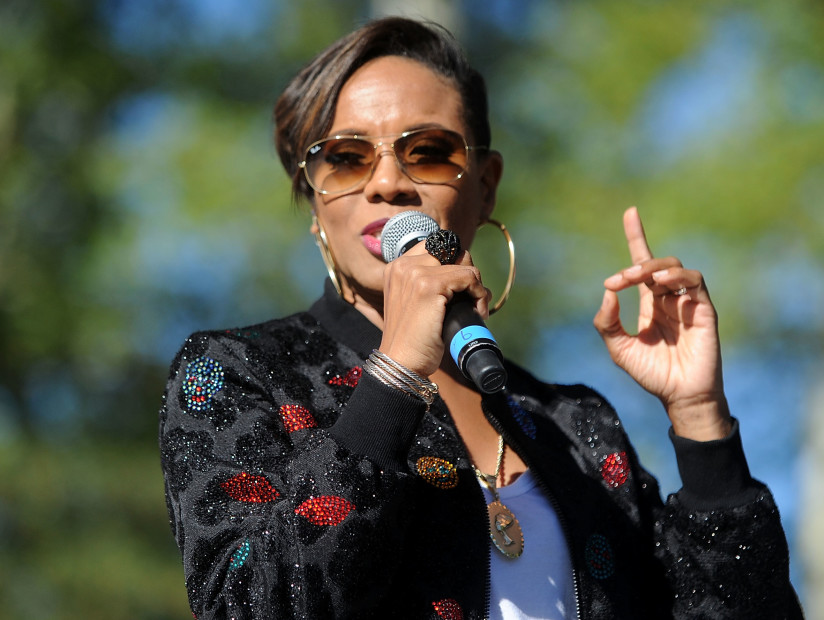 Los Angeles, CA – If you surfed the internet in any capacity this past couple of months, it was hard to ignore any news headline regarding a celebrity male getting accused of some form of sexual misconduct. The backlash for these situations has been apparent — causing countless testy and animated debates across social media and it has even seeped into the Hip Hop community, notably marring the life and times of Russell Simmons.

Pioneering rapper and well-known media personality, MC Lyte recently addressed a workplace predicament related to the ongoing sexual misconduct chronicles on her personal Instagram page when she posted a quippy caption that read, “Sexual harassment or flirting – probably determined whether she likes him” while adding, “Some of y’all flirt on Monday to get what you want and then when he/she flirts on Friday and you mad?!” with the hashtags “toomuch” and “interofficeblues” added for effect.

The unisex post was well-received by several thousand followers but also caused some concern for others, especially those who still had the ongoing high-profile accusations on their brain.

It was not my intention to offend anyone who has ever experienced sexual harassment; nor anyone who has flirted.  In order to have healing, we need to discuss the Rules of Engagement Now. #RulesOfEngagementNow

After seeing the damage, the post was removed and replaced with a video PSA and in an exclusive conversation with HipHopDX, Lyte (born Lana Moorer) offers more clarity on the matter than a social media post could ever offer.

“There’s so many different varying degrees of what we’re talking about now,” she explains to HipHopDX shortly after a cross-country flight back to Los Angeles. “With my [original] post, I simply was referring to co-workers. I wasn’t delving into the world of anything else. Where you’re in an environment where you work. For me, in order to find true love, I actually went to internet dating. Because where else are you going to be? It seems like in the workspace, you’re there to work but that doesn’t mean attraction between two people mutually doesn’t happen. So basically that’s what I was talking about.

“I am not against the #MeToo campaign. I am totally for what is your truth? Let’s find out what your truth is and let’s get these rules of engagement together so we can live together harmoniously.”

When it comes to the defining what harassment is, there has been a myriad of answers and solutions being tossed around, but a common accord hasn’t developed amongst the masses. And Lyte simply wants everyone to come towards the middle.

“I think that’s for every individual to decide,” she says when asked where the line between harassment and flirting forks the road while adding, “that’s pretty much what my post is about. And it’s never my attention to offend people. However, when truth is spoken, sometimes it will hit a nerve. But I’m clearly stating that we need to have an ongoing discussion that opens each sector to the concept of what is and isn’t accepted.”

But make no mistake or allow yourself to get anything taken out of context. The Hip Hop legend isn’t allowing for any obvious lines to be buried in the sand.

“Let me make this clear: Sexual harassment is completely unacceptable,” Lyte says matter-of-factly. “I would imagine people understand MC Lyte — at least those who have followed my career throughout time — that I’m all about the empowerment of women. But I’m also for a culture where men and women really understand and have an affinity for one another. And not have lines that are so blurred and obstructive that we don’t get along. But thank goodness my fans know who I am. And they know at the core what it is that I’ve made my life’s mission; which is to inspire and empower women. So for me, it’s just systematic that I would want people to begin to think. There needs to be a healing.

“We need to have a discussion about the rules of engagement. I was looking at my timeline and I had people say they met their spouses at work and there was one woman who admitted before they even started dating, she made advances towards this guy. They wound up getting married and have two kids.”

As a longtime member of The Recording Academy, Lyte recalls seeing huge books that outlined the company’s guidelines. And while citing the need for workplace breakout sessions, she feels her fans are already in agreeance to some of her beliefs.

“Most people … a large percentage agreed with my post,” she says. “It’s a tremendous outpour of people wanting to discuss it. This is something we need to make a priority. It could just be so much better how we communicate with one another. The few objections that I did see was enough for me to take the post down and reroute the conversation. What are the rules? Who best to set them but the people?! The people need to be able to get involved and figure out for themselves and also hear other people’s stories and circumstances.

“I guess a guy got fired for making a pass and I’m seeing on social media because a lady is yelling because a guy said hello [Laughs]. It’s so wishy-washy right now in terms of that line. What are the rules? Because I’m sure if people knew them, they’d follow them! Who wants to be in trouble?”

It may be deeper than rap but who else to serve as the figurehead behind the movement than MC Lyte? As a member of the board of trustees at Dillard University, an active philanthropist who raises money for women’s needs and kid’s college tuition, she actually felt compelled to take on a challenge when asked.

“I am right for the job,” she confidently stated.

Here’s to someone taking this situation by the reigns and straddling it for good.